All is merry and bright - and filled with demons, killer santas, blood, and tons of laughs. 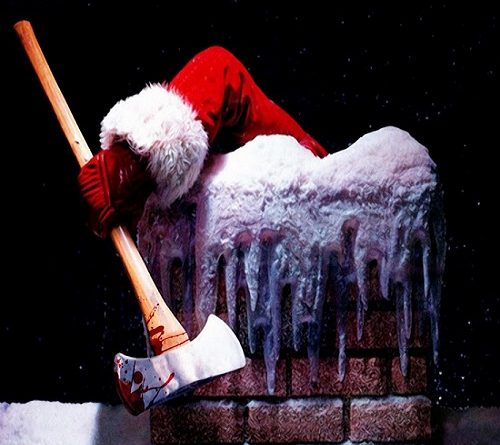 I love Christmas. I love absolutely everything about the holiday season. But at the same time, I don’t want to fully take a break from my steady diet of horror films. Thankfully, I’m not the only person in the world to think like this. There’s a whole plethora of Christmas horror movies available for sick freaks like me to spread a little weirdness into the Christmas spirit. And I am so thankful for that.

See? Now THAT’S how you party for the holidays.

Since I’m a great and wonderful guy, I’ve divided this list for your convenience. Skip to what applies to you, or read every through all of them. Your call – I already wrote it, so it doesn’t matter to me!

For (most of) the whole family:

Starting off this list, we have one of the lesser-known titles. Rare Exports is a Christmas horror movie you probably haven’t seen but should. An archeological dig turns up the real Santa Claus – and he seems nothing like the way they portrayed him in Rudolph the Red-Nosed Reindeer. It’s in Finnish, so you’ll have to get used to the idea of watching with subtitles. Come on, it’s not so bad. You do read, don’t you?

Krampus has become a modern classic. Michael Dougherty’s dazzling foray into the Christmas season might have been the single most entertaining movie of 2015. Yes, many have claimed that the lack of blood was a bummer, but I disagree. It’s a film that’s a little bit spooky, but nothing you’ll wet yourself over. There are some awesome monsters and some very tense sequences. But it’s the kind of film that the whole family can sit down and enjoy together. After all, that’s what this whole season is about. Sitting around getting fat and watching movies because you’re too lazy to go outside and actually experience life with your family. But I’m not here to judge. No, sir. Just keep on baking those gingerbread cookies and see where they get you.

Fun fact: Stephen Spielberg’s 1984 Christmas film, along with Raiders of the Lost Ark, prompted the MPAA to institute the PG-13 rating. It’s designed for films that are unsuitable for younger children but perfectly fine for teenagers to adults. Sometimes, there only needs to be one violent act to get the rating slapped on. Here, there are actually a lot. I mean, they don’t treat those Gremlins very nicely. For God’s sake, one of them gets put in a blender, and another gets shoved into a microwave – and then they turn the damn thing on! This poor little guy explodes! It’s insane! It’s absolutely, positively insane!

…which is exactly why I love this movie so much. The soundtrack, in particular, is one of the best ever. That theme is so bizarre and silly; it’ll be sure to get stuck in your head for hours. Another fun fact; if you feed him after midnight, the same exact thing happens to Ash, our CEO. It’s true. I’m not lying.

For those in search of something intense and unsettling:

Bob Clark directed not one, but two Christmas classics. One was the beloved A Christmas Story in 1984. A decade  earlier, however, he created this. Black Christmas is a perverse, dreadful film – and that’s exactly why I like it. A group of sorority girls is stalked over Christmas break by an unknown killer. There are some very gruesome and disturbing sequences in the film, and this is definitely not suited for anyone young and impressionable. It chills me to this day. If you’re sick in the head, or maybe just in for a really good scare, this is the one for you.

For fans of Goldberg – as in, the professional wrestler:

I don’t even know where to begin with this one. You need to watch the opening sequence if nothing else. Goldberg is a maniac Santa running around town ending people’s lives. Think about that sentence for a second. Then think about the fact that the previous sentence really happens in a real movie that really exists on the same planet that you do. This is actually life, and Goldberg was once paid actual money to make this movie. Life is great. God bless Goldberg, God bless the WCW, and “God Bless us, everyone!”

For fans of anthology films:

2015 was quite the productive year for Christmas horror films. Point in case: A Christmas Horror Story, featuring none other than James T. Kirk himself, William Shatner. Four stories are interwoven in this tale of holiday terror, with a finale that might just blow your mind. It’s a great choice for anyone who wants to see a bloodier side of Krampus. Or, it’s a great choice for anyone who has ever wanted to see Santa Claus chop the living shit out of all his little elves. It’s pretty gross, let me tell you.

For anyone who enjoys ridiculous, unabashed stupidity:

The most controversial Christmas horror movie ever made, Silent Night, Deadly Night almost single-handedly ended the slasher boom of the early 1980’s. The Parent Teacher’s Association had a field day with this one due to the fact that the film ran TV ads depicting Santa Claus as a murderous killer. The PTA won – sort of – and the film was pulled from theaters shortly after its release. But the joke was on them after all, and their outspoken disdain for the movie eventually turned it into a cult classic, spawning five sequels. Yes, five. Take that, angry moms of America. It’s just a movie. And while we’re at it, look what all of your hairpray has done to the ozone layer. Shame on you!

There’s a sex scene in this movie, and it involves a snowman. That’s all you need to know, really. This movie is pure trash – but trash in the most lovable, hilarious, demented and entertaining way possible. Happy holidays everyone.