The X-Files: Season Ten Review   I’m not mad at you, Chris Carter, I’m just…disappointed. Not that we’ve had some time to digest the most recent addition to the...

I’m not mad at you, Chris Carter, I’m just…disappointed.

Not that we’ve had some time to digest the most recent addition to the lives of Mulder and Scully, it’s been a bit easier to sort through everyone’s collective feelings on the six-part miniseries. The initial anger felt by many fans has had time to simmer down, allowing many to look at the revival in a different light, and though I’m certainly not angry, I’m also most certainly not ecstatic about the season as a whole. Though it had some extreme highs, it has also had some unsettling lows.

Which, truthfully, is to be expected for a season of most shows on television. However, the issue with The X-Files is that there simply isn’t enough of the new season to make these lows forgivable; we were given precious time to spend with these characters again, and not all of it was spent very well. The new series started off with a bang, which, unfortunately, only resounded throughout four of the episodes. Which even though by rounding up should in theory make the show a success, the way in which the two episodes fell short was so far to almost spoil the entire thing…but only almost. 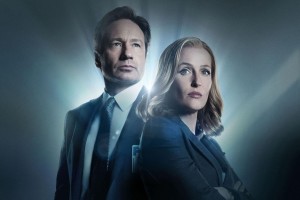 Much of the problem with the new season was the inclusion of two new characters: Einstein, a skeptical red-head doctor, and her partner, and Miller, a man with his head in the stars, constantly looking to the supernatural for explanations. The two could have been funny – Mulder and Scully’s first meeting with them was somewhat comical – but instead just overstay their welcome by being highly unlikable. Miller is a bit more innocent of this crime, as Robbie Amell (The Flash) could absolutely work as a successful secondary character, possibly an addition to the team, but, regrettably, Einstein is highly offensive. Played by Lauren Ambrose (Six Feet Under), Einstein is a more cynical, less original character than Scully, and her presence completely spoils the dynamic of the show. If this sounds a bit harsh, forgive me, but it just does not make sense for the two of them to be such a main point in the new season; we came for Scully and Mulder, not Einsten and Miller. Why would any fan want to focus on them instead of the excellent team of Duchovny and Anderson? Chris Carter, why did you do this? Who told you this was a good idea!?

Besides that, the mythology just gets downright confusing, making the viewer at first believe that everything Mulder has ever worked for was in vain, to then having us believe that Alien technology is actually going to be used by the government for the downfall of all mankind, an apocalypse scenario that takes us out of the quiet conspiracy of the first nine seasons. This is an issue due to the fact that it changes the entire tone of the series; how can you go back to two government agents solving cases of toilet monsters and inbreds when they are now tasked with (most likely) saving the world? And to further add to our frustrations, leaving us on a cliffhanger without a definite answer as to whether or not the series will return for another season? One may surmise that Einstein and Miller are set to take over in the event that Anderson should decide not to return, which would almost definitely result in many fans abandoning the series forever. (It’s important to note that although there was a time in which Duchovny was not a part of the series, it’s highly debatable that a second departure would be a good move for the show.) 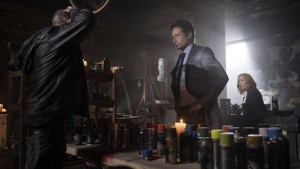 However, frustrations aside, credit must be given for the first four seasons being absolutely excellent. The third episode, “Mulder and Scully Meet the Were-Monster”, was one of the best of the series, not only the season; Rhys Darby brought one of the most intriguing and funny storylines ever to happen to the show. The Were-Monster is funny, satirical, and just plain entertaining, with Mulder’s cluelessness on how to even work a smartphone being one of the highlights of the episode. It was an absolute delight to be able to watch an episode of The X-Files like this in 2016…a dream which I had once thought was out of the realm of possibility. Other highlights of the season include the return of The Cigarette-Smoking Man in an extremely frightening way, making an almost unbearable finale actually worth watching, and an incredibly violent hulk of a man who rips people into pieces in the fourth episode, “Home Again”. The episode was quite possibly one of the goriest in the series, justifying the title as an homage to the original “Home” episode which is widely regarded as one of the most terrifying and disturbing moments of the series. 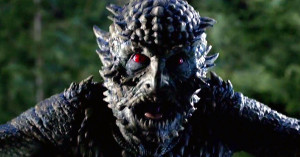 The performances in which Duchovny gives in the newest season has been criticized by some as “phoned-in” and stale, giving praise only to Anderson, which I believe is both unfair and wrong. Both of the stars gave performances that were both believable and also true to the character’s personalities which had been cultivated in hundreds of episodes before these six. If anything, it felt like they were Scully and Mulder, not just playing them on a television series. In fact, almost every single performance of the show was done well, even “That Guy from The Soup”. Yes, Joel McHale as Tad O’Malley was actually one of the biggest assets to these episodes, despite original reservations. I would not mind seeing him as a continued presence on the show, provided Chris Carter decides to come back for more.

And on that subject, Mr. Carter, I’d like to use this as an open letter to you, and actually say that I would love for the series to come back again; I will always give The X-Files attention, provided that Scully and Mulder are the main focus. Please, for the love of everything weird and alien, please don’t make any episodes without the two. Einstein and Miller are not feasible replacements for the original team. It’d be crazy to even think that. 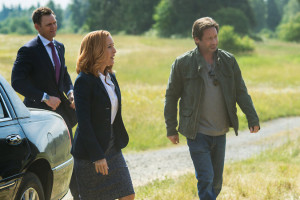 At the end of the day, season ten of The X-Files was not terrible; it was simply heavily unbalanced. There’s no doubt that I will be returning to some of these episodes for a second watch, but I’m also certain that I’ll never watch the penultimate episode “Babylon” ever again. I’d recommend that everyone watches the season and form their own opinions…but I can’t be responsible for anyone being severely confused or disappointed by the ending of it.

Here’s to hoping we see at least one more season for Chris Carter to wrap everything up and finish what he started. I know you have it in you, Mr. Carter, I just know it.