Winter Is Coming Pledge Allegiance to House Stark It has been a long summer but winter is coming. We’ve all heard the words repeated over and over again by...
by Former Writers August 11, 2016 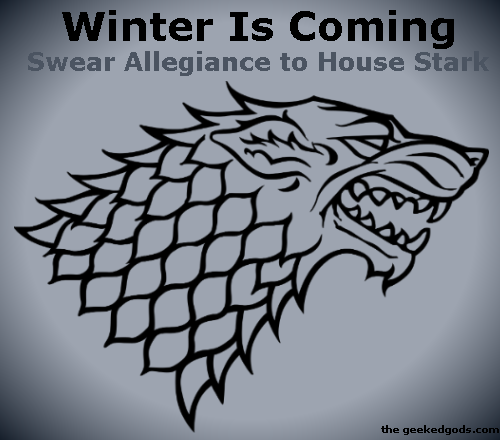 This piece will focus primarily on the entire run of the television series Game of Thrones, rather than its sister book series A Song of Ice and Fire. The reason is twofold: the first being that I feel more people are familiar with the television series and the second being that I myself have not yet read all of the books. At any rate, the night is dark and full of spoilers.

From both my experience with the books and the show, I am always drawn to House Stark. The Northern house stands by a sense of justice and morality that other houses of the realm dismiss. While the individuals of House Stark each have their own singular issues, the family as a whole embodies the heroism expected in a fantasy series. And that is why we all ought to pledge allegiance to House Stark.

The Stark family is comprised of seven people (eight if you include “the bastard Jon Snow” but R+L=J so let’s stick with seven). Ned Stark (Sean Bean) marries Catelyn Tully (Michelle Fairley) and, with her, they have five children: Robb (Richard Madden), Sansa (Sophie Turner), Arya (Maisie Williams), Bran (Isaac Hempstead-Wright), and Rickon (Art Parkinson). Jon Snow (Kit Harrington) and Ned’s ward Theon Greyjoy (Alfie Allen) both grow up alongside the five Stark children, making one big happy family. They’re no Brady Bunch but they are House Stark and winter is coming.

Not only does the first book open with two Stark POV chapters (Bran and Catelyn) but the pilot episode of the television series focuses on the North, spending a significant amount of time with the Stark family as they host the royal court. When the show first aired, it even seemed as though Ned Stark would be the protagonist. Naturally, he is executed before the season finale. Still, the tumultuous events in Westeros seem to always follow the Starks. The War of the Five Kings occurs, in large part, due to Robb Stark’s instinct to avenge his father (which makes sense because Ned is probably the best dad in the series).

Stark is the house that champions justice and the good of the people. They do their own dirty work (“the man who passes the sentence should swing the sword”) and seem genuinely interested in doing the right thing. From Ned’s detective skills uncovering the truth behind the Lannister-Baratheon children (or should we say Lannister-Lannister) to Jon’s desire to protect the realm from the White Walkers, we’ve seen the Stark family make noble choices. But no one is infallible and they also make foolish choices, such as Robb’s decision to break his oath and marry Jeyne Westerling (in the show, she is replaced with Talisa Maegyr) or Ned confronting Cersei about her children. Come on, Ned, don’t you know that power is power and Cersei’s the one with all the power in King’s Landing?

I would argue that House Stark is comprised of lawful good people. As the books and show progress, certain characters begin to lose the “lawful” component, but never would I think of a Stark as evil or conniving. Compared to practically every other major player in Westeros (and, let’s be honest, even among those in Essos), House Stark is, at their core, good. Richard Madden, who plays Robb Stark in the show, said to SciFiNow, “They’re the only family in Game of Thrones that is inherently good – it’s built into them. A lot of the other families are a bit more difficult or will go to more extreme lengths to get what they want and do bad things, but I think the Starks are always true to the most noble, honourable path.” Even throughout Westerosi history, good things came of House Stark (including Bran the Builder’s wall – yes, the very same Wall that currently stands between Westeros and the White Walkers).

House Stark will likely never sit the Iron Throne and I’m okay with that. They are far too just for the court intrigues of King’s Landing. They are too honorable to preemptively kill their enemies (a trait that both Cersei Lannister and Robert Baratheon shared). Perhaps we will one day see a Stark as ruler of the Seven Kingdoms (maybe as a result of R+L=J) but I personally would much rather see a happy Stark reunion in Winterfell than a fractured household struggling to unite the kingdoms.

I will readily admit that my familiarity with House Stark is predominantly through their portrayal on the show and it helps that fan-favorite characters like Arya Stark and Jon Snow are portrayed by magnificent actors. And while many dislike her, Sansa Stark is my favorite character in the series and I want nothing but good things and lemon cakes for her. If you, like me, have not yet finished the book series (or if you’re hankering for a reread), I recommend tuning in to Practical Folks for their weekly Game of Thrones Book Club. They’re reading at a pace of about 70-80 pages per week and hosting about a two and a half hour livestream discussion each week. Don’t worry, they keep the spoilers and show references to a minimum.

The North remembers and I along with it. You can take your Lannisters and Greyjoys and Targaryens and deal with all that entails. I’m heading north to Winterfell to enjoy tea and lemon cakes with House Stark.

Hate House Stark? Tell me why and share your favorite ASOIAF family in the comments!