Why You Should Play Mai Star By: Lane Martin When I was young, I remember heated games of Gin with my mother initially played to pass the time. Eventually,...
by Former Writers April 25, 2017 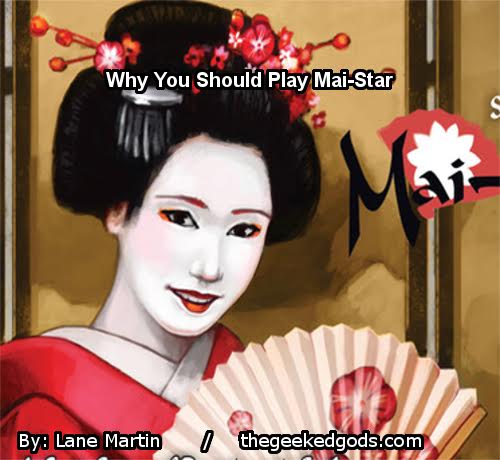 When I was young, I remember heated games of Gin with my mother initially played to pass the time. Eventually, it became a bit more than that. Rather than being a friendly card game between a mother and son, these games took on a much more competitive tone as we grew to know the eccentricities of each other’s play styles and the subtler aspects of the game. It’s not that Gin was some new phenomena to us, everyone’s played a hand or Gin or Rummy, but, with this regular challenge, we both had cause to improve. Gin is the first game that I really took seriously enough to really break down. Years later, playing Mai-Star with my regular game group, nostalgia brings me back to those days gone by.

At its core, Mai-Star, like Gin, is a hand management game. Players will take the role of a geisha and advertise and attract guests to gain victory points and increase their three stats. Higher stats allows for the use of the abilities of more valuable guests. First person to burn through their hand ends the round and sticks other players with negative points for each of their remaining cards. It presents a very engaging press your luck style of play where going for high points can make you or break you. 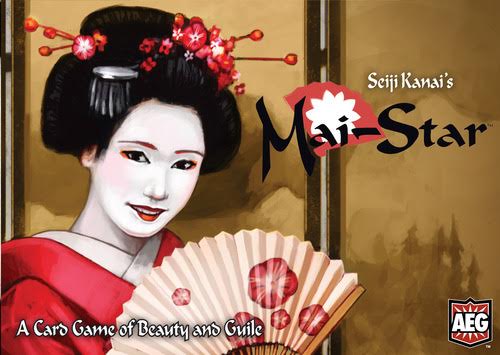 Mai-Star: Be a pretty geisha, hurt your friends.

Each geisha has their own stats and their own special ability. All of these heavily influence play and none of them are trivial. One geisha can play multiple cards of a certain color while another is just generally better in every stat, at the cost of having extra cards. Changing up your geisha from game to game helps keep the game fresh from game to game. I have honestly never had a game with any of the geishas that I didn’t enjoy. 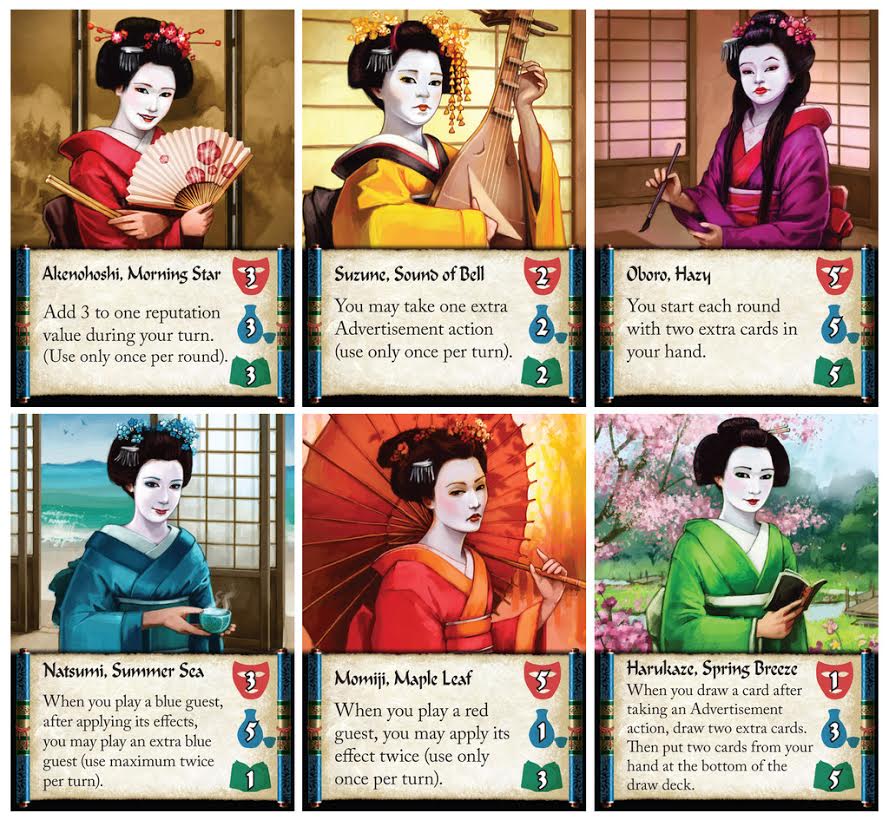 Lovely, delicate, ruthless monsters, all of them

Even without powerful geisha abilities, there are other ways to get things done. If a geisha has high enough stats she can play a card as a guest and, on top of earning those victory points at the end of the round, take advantage of that guest’s ability. These abilities run the gamut from attacking other players to taking another turn. Exceptionally powerful guests can end the round immediately and net a great deal of points. These cards can also be played as an advertisement, which increases a geisha’s stats but makes her draw a replacement card. Ads won’t win you the round, but they’re an investment for your future.

The art of using your customers.

Mai-Star is a simple hand management game with deceptively simple rules. No two games are the same and the subtleties of the rules promote exciting new strategies fairly frequently. I have taught the game to board gamers and new players alike and have yet to run into someone who couldn’t understand it or didn’t enjoy it. If you’re in the market for a new game, then give Mai-Star a look.