What is Krampus?   This Friday, Michael Dougherty, creator of the cult-classic Halloween film Trick ‘r’ Treat returns with a new holiday-themed feature…except this time, it’s focused on Christmas... 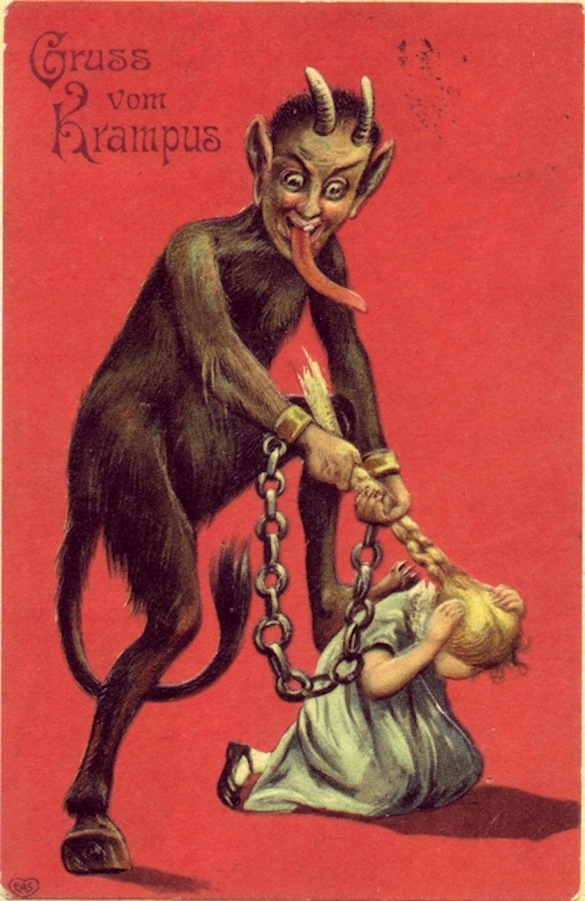 This Friday, Michael Dougherty, creator of the cult-classic Halloween film Trick ‘r’ Treat returns with a new holiday-themed feature…except this time, it’s focused on Christmas instead of Halloween. Krampus will be unleashed upon the general public December 4th, but before you go see it, let’s talk about what Krampus actually is. 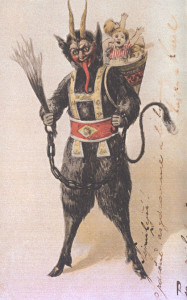 In North America, it is said that a jolly old white-bearded man named Santa Claus comes into your home through your chimney on Christmas Eve, giving presents to the children that are well-behaved and coal for the not-so-well-behaved. In parts of Europe, such as Austria, he behaves a little differently. He is more commonly referred to as “Saint Nick,” and yes, he does bring presents, but only presents. He pays no mind to disciplining the badly-behaved kids of Europe. Instead, he has a companion for that. Yep, you guessed it; it’s the Christmas devil… Krampus.

Depicted as half man, half goat, full demon, Krampus comes on December fifth, on the eve of Saint Nicholas’ day. He comes brandishing chains that are thrashed about, commonly carrying a sack or tub on his back to carry children off with him. December fifth is known as Krampusnacht, translating to “Krampus Night.” On this night, the children of Europe are known to put out a boot or a show. If they have been good this year, they will receive gifts in it. Not like Christmas gifts. The most common would be a chocolate Saint Nikolaus and fruit. However, if they have been bad, they will wake the next morning to find sticks or rods in their boots, signaling a spanking for their bad behavior.

Yes, Krampus relies on literally scaring the living shit out of little kids to get them to behave year-round. Coal? Who is scared of coal? But a fang-bearing, horned demon, ready to spank you or take you away to possibly kill you? Okay, yeah, if I was a child, I’d behave myself. 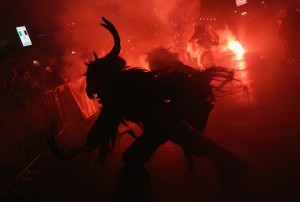 Annual festivals are had in his honor. The most common is called Krampuslauf, which is a Krampus run. Young men dress up as the beast and run throughout the streets in a frightening parade, often extremely drunk. Schnapps are very popular on this night. Truth be told, it sounds like more fun than I can even imagine. They come with whips or branches to symbolize the punishment for bad children. They dress in full body fur suits, wearing carved wooden masks and horns with great detail.

The origins of Krampus are not the clearest, though wild men and characters similar to Krampus can be dated all the way back to 2000 BCE, though not referred to as Krampus just yet. The earliest mentions of him by name can be found closer to the 1600’s. The word Krampus in itself translates from High Old German, meaning “claw.” Yikes. He’d cart off children to hell if they were misbehaved, or if they were lucky, only hit them with a bundle of sticks. He is undoubtedly based off of Paganistic beliefs, predating Christianity, though not much is known beyond that.

In the early 1900’s, the people of Germany began celebrating him in a new way outside of Krampusnacht. Krampuskarten, or “Krampus Cards,” became popular. Simply put, they are holiday greeting cards that depict Krampus instead of Saint Nicholas. He is usually seen sticking his tongue out and stealing children. Because, well, those are two things that he just does really well. 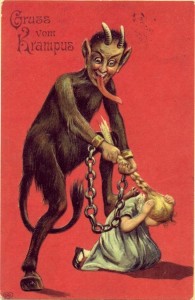 Unlike Jolly ol’ Saint Nick, he hasn’t been in the media outside of Krampuskarten. There have been a few mentions of him here and there, but he has recently been exploding, undoubtedly thanks to Dougherty’s new film. There have been numerous Krampus-related features trying to exploit the hype, but so far only A Christmas Horror Story has been worth watching. The others are…well, they’re not good. At all. So don’t be fooled.

If it makes you sad that there are such little Krampus movies, fear not; Kevin Smith is releasing one next year. And, depending on the success of Krampus, we might be seeing a lot more of him in the near future. Here’s to positive thinking.

Look out for my review of Krampus coming later in the week, here on TheGeekedGods.com. Stay Geeky.