We’re All Mad Here, Mr. Robot and the rise of the insane savior. By Sarah Vale I had a feeling Mr. Robot was going to be my kind...

We’re All Mad Here, Mr. Robot and the rise of the insane savior. By Sarah Vale

I had a feeling Mr. Robot was going to be my kind of show. After all I’m a huge Fight Club fan and this show is basically just what you get when Tyler Durden has student loans. Creator Sam Esmail has admitted that the movie was a huge inspiration as was the Arab Spring. While Esmail’s social critique is flawed in many ways he did get one thing right. Debt is a problem on a global scale and it’s all connected. We all owe money to someone, whether it’s because of student loans, credit cards or bad mortgages and the people that don’t? They own our debt and thus own us. So is Elliot and f Society what we need? 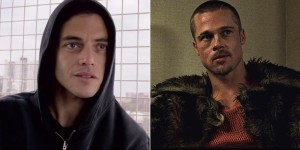 We have to be careful how we portray our heroes. Humans are flawed and the fictional characters we create need to be flawed as well if we’re going to bring them to life. There’s a lot to love in Elliot and Tyler Durden and I’m not just talking about when they take their shirts off. They both want people to live authentic lives rather than buying into the corporate bullshit were being sold literally everywhere. They think debt has enslaved us. As a debt activist I agree. I’ve spent the past four years working with people who can’t get jobs because their credit scores are too low or who can’t get apartments because of their student loan debt. So as much as I love these characters and as much as I’d love for fsociety or project mayhem  to erase our debt, I’m not in love with the idea that anyone who tries is either insane or the disciple of a mad man. 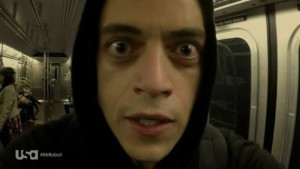 The problem is when our heroes are insane their goals seem insane too. It’s not a hard leap from Elliott’s crazy to a global jubilee is crazy. Season one ends with fsociety declaring a literal end of the world party. They’re scared of what they’ve done and it seems they should be as Governments are falling. But to be fair the end of the French monarchy was pretty macabre for a bit there. The idea that a plot is so crazy we need a mad man to execute it makes for great tv, but it won’t help change the world. Especially when you don’t actually need to be insane you just need to try.
I have worked on several anti capitalist anti debt campaigns, I’ve heard “That’s a great idea but it’ll never work” more often than the Pope has heard he’s cool. The thing is some of our plans work, usually the ones were enough people refuse to say it can’t. I’m never given good reasons for why things won’t work, it usually stops at a nebulous “they” won’t let you. So who is this nefarious group and why are people so convinced they will thwart us? 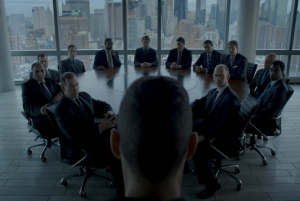 TV shows to me represent a pretty big they. A large group of mostly white mostly male people who dictate which of our dreams we can see played out on the screen.
Comic books as usual have managed to buck the lone mad hacktivist narrative but what they’ve given us isn’t actually any better. Titles like Archaia Black Label’s Hacktivist or DC’s The New 52’s The Green Team Teen Trillionaires rely on the goodness of rich kids to save us. It’s a trickledown messiah complex. 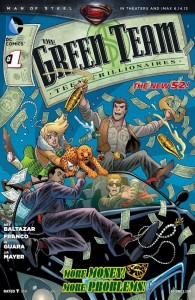 In hacktivist it’s not the kids throwing bricks that are toppling their government it’s the fictional equilateral of Mark Zuckerberg and his bestie. I find this kind of narrative even more insulting because the thing is if the 1% actually wanted to stop world suffering they could. If they put the sanctity of all human life and happiness above profit we wouldn’t be in this mess. So it’s rather infuriating to read about how the people causing all the problems are supposed to be saving us.

Our media currently can’t even manage to give us a not whitewashed portrayal of actual turning points in social justice history (I’m looking at you Stonewall movie) so it does seem like a bit much to ask for better fictional heroes as well. However in fiction we can work out problems that maybe we shouldn’t put to a real world test. With fiction we can try to plot a path to the future. Let’s stop looking to our oppressors to save us and let’s stop saying only the insane fight back. The one thing Mr. Robot gets right is that people want to make the world better and we know who the enemy is. It’s time to start fighting.