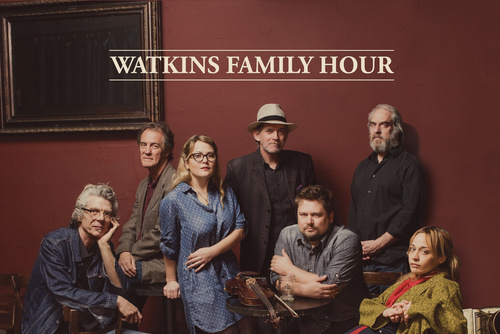 It’s impossible to talk about the Watkins Family Hour project without talking about Nickel Creek, and it’s impossible to talk about Nickel Creek without talking about Chris Thile. He’s been everywhere you look the last year or so, touring with Punch Brothers, putting out side projects, getting named a MacArthur Genius, and most recently being  tapped to host Prairie Home Companion in the wake of Garrison Keillor’s leaving. It’s hard to listen to anything Thile-tangential and not to hear the corporeal ghost of his absence. The album that emerges from the Watkins Family Hour is something less neat, more handcrafted, with a rough situational quality that it’s hard to imagine Chris Thile ever signing his name to. There are places where the patchwork is visible and ugly and genuine, and moments of striking harmony, though not necessarily in equal parts. Check out their album here

Sara Watkins presents as the obvious bandleader, both on the record and on tour. On an album of covers, the best tracks are invariably ones that make liberal use of her voice: “Feeling Good Again,”  “Early Morning Rain,” and “Brokedown  Palace” hit a certain note of wistful, satisfying nostalgia that frames the general feel of the record. Fiona Apple is unfortunately used to less stellar effect. When her vocals are audible they are as tight and expressive and haunting as ever, and she knocks her cover of Skeeter Davis’s “Where I Oughtta Be” out of the park, but as a lifelong devotee of Fiona I was disappointed at how underutilized she seemed.

The weakest tracks on the album are, paradoxically, where most of the character shows. “Prescription for the Blues,” “She Thinks I Still Care,” and “King of the 12 Oz Bottles” are certainly less polished, and come across as non-band tracks, showcases for the other players. Even Sean Watkins’s “Not in Nottingham” and “Going, Going, Gone” fail to match the punch delivered by the female vocalists in the band. The other tracks are even less polished, lending the album an uneven feel.

But – and here’s where you’ll have to bear with me – that’s sort of why it works. An album of capably handled, well-executed covers is boring. The concept at work here – that this is a fluctuating live show taken out of its natural setting, cut to tape, and toured outside of its typical venue – is naturally inclusive of a showcase vocal number for Benmont Tench, or the other members of the band I’ve failed to mention yet: drummer Don Heffington; dobro player Greg Leisz; and bassist Sebastian Steinberg. It makes a brave attempt at opening the Watkins Family, not just to the listening audience but to the rest of the band. There’s no “Chris Thile hands a verse to Gabe Witcher” showmanship about it – it’s meant to be an everyman’s band, a gang of equals. Whether or not it succeeds is ultimately up to you: do you feel like one of the family?

They aren’t coming back to NYC on this tour but if any of your last-ditch summer traveling takes you south, their live shows are well-worth checking out. They bring on local guests in each town they visit, and it really does feel like something kinda special. In the meantime, I’ll leave you with an ode to Largo – the club that started it all – that manages to namecheck almost everyone in the band. Oh, and it’ll give you a little bit of the Fiona you might’ve missed on the record.

Links: facebook / twitter / instagram
Bio: Magdalen Jenne is a musician, writer, and hot cocoa enthusiast based in Brooklyn, NYC. She spends her time working in an undisclosed record store, proving that women can listen to Rush and pretending it’s 1976. Find her on any given afternoon at The Strand, touching the books in the Greil Marcus section. Tweet her @VintageRainbows
Tags
avante gardeChris ThileCoversFiona AppleLive RecordingmusicPrairie Home CompanionSara WatkinsSean WatkinsWatkins Family Hour
Categories
MusicWhat's Hot
SHARE THIS ARTICLE
OLDER ARTICLE