Batman #25 Review By John Saavedra Even someone as ridiculously secretive as Bruce Wayne knows that there can be no secrets between a husband and wife. Tom King and...
by Guest June 21, 2017

Even someone as ridiculously secretive as Bruce Wayne knows that there can be no secrets between a husband and wife. Tom King and Mikel Janin’s “The War of Jokes and Riddles” is Bruce’s confession to Selina, who he proposed to in #24 to much fanfare. Before they can get married, Bruce must tell her his darkest secret. 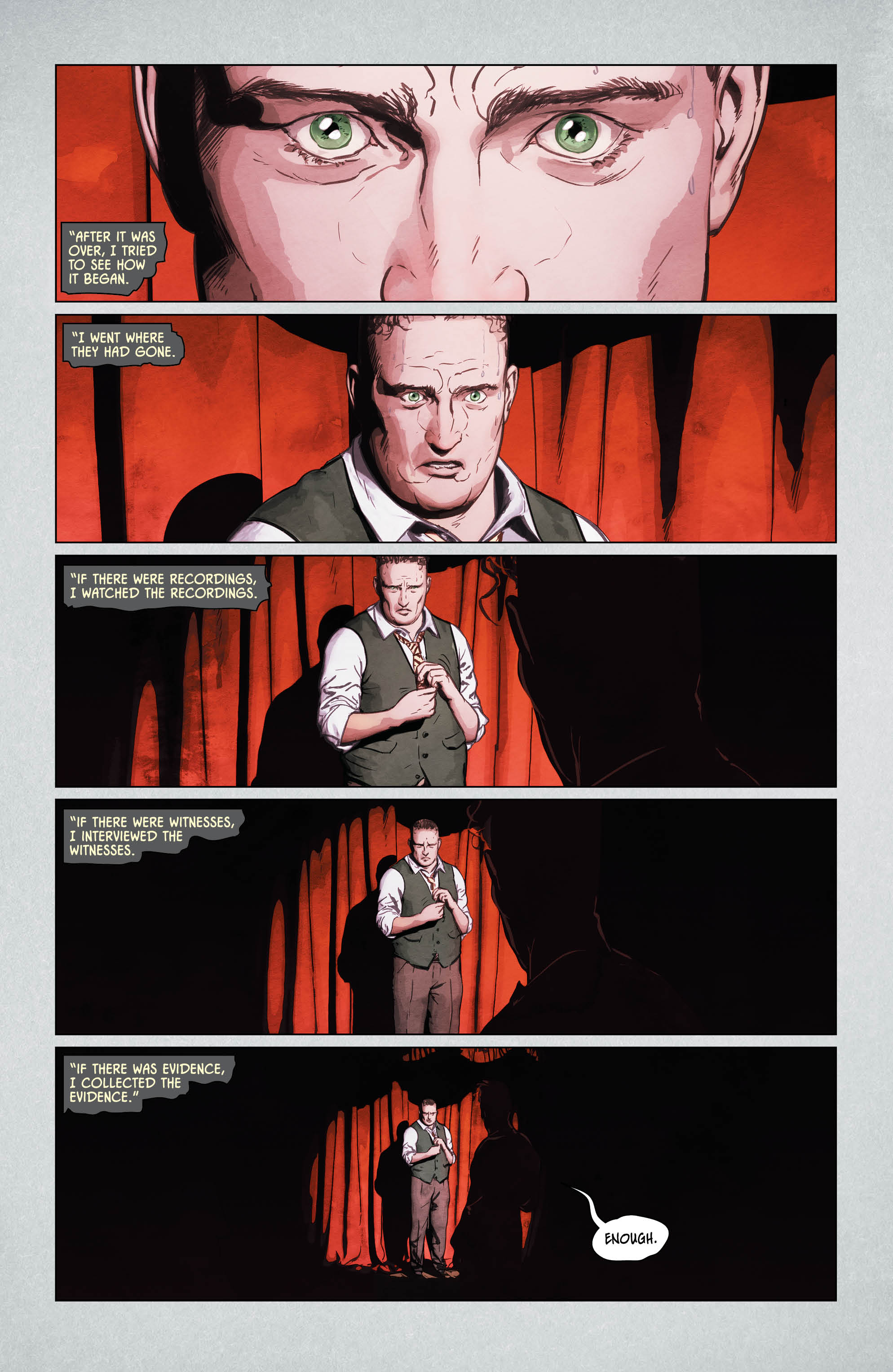 This is King’s first attempt at a much longer arc on Batman. So far, he’s worked within the more conventional format of five issues per story, but #25 is the start of a year-long epic. I have to say that I’ve really enjoyed King’s standalone issues more than his arcs. “Rebirth,” “Rooftops,” “The Brave and the Mold,” and “Every Epilogue Is a Prelude” have all focused in on one aspect of the Dark Knight, whether it be the cyclical nature of his mission or his relationship with Catwoman, and they’ve been beautifully told. 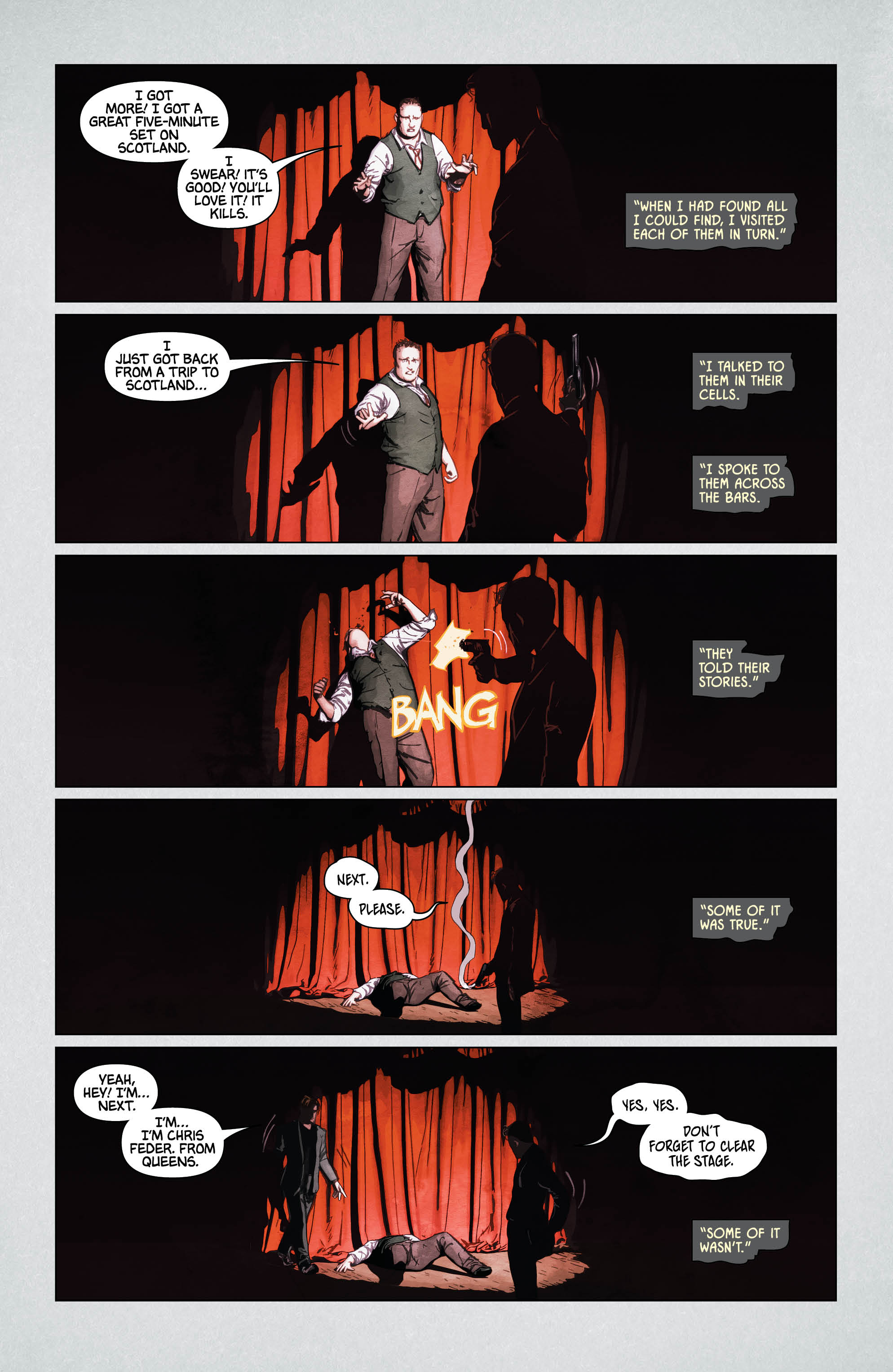 In contrast, “I am Gotham,” “I am Suicide,” and “I am Bane” have all felt a bit rushed to me, especially the latter, which just sort of ended. This seems less a symptom of King’s storytelling – he’s quickly proved to be one of comic’s top talents with series like The Vision and The Omega Men – and more to do with the five-issue structure. It’s felt like every time King is about to get somewhere interesting, he’s already in the midst of closing out the story. I’m hoping the extended length of “The War of Jokes and Riddles” gives King the space he needs to really knock it out of the park because there’s some seriously interesting stuff in the first issue of this arc. 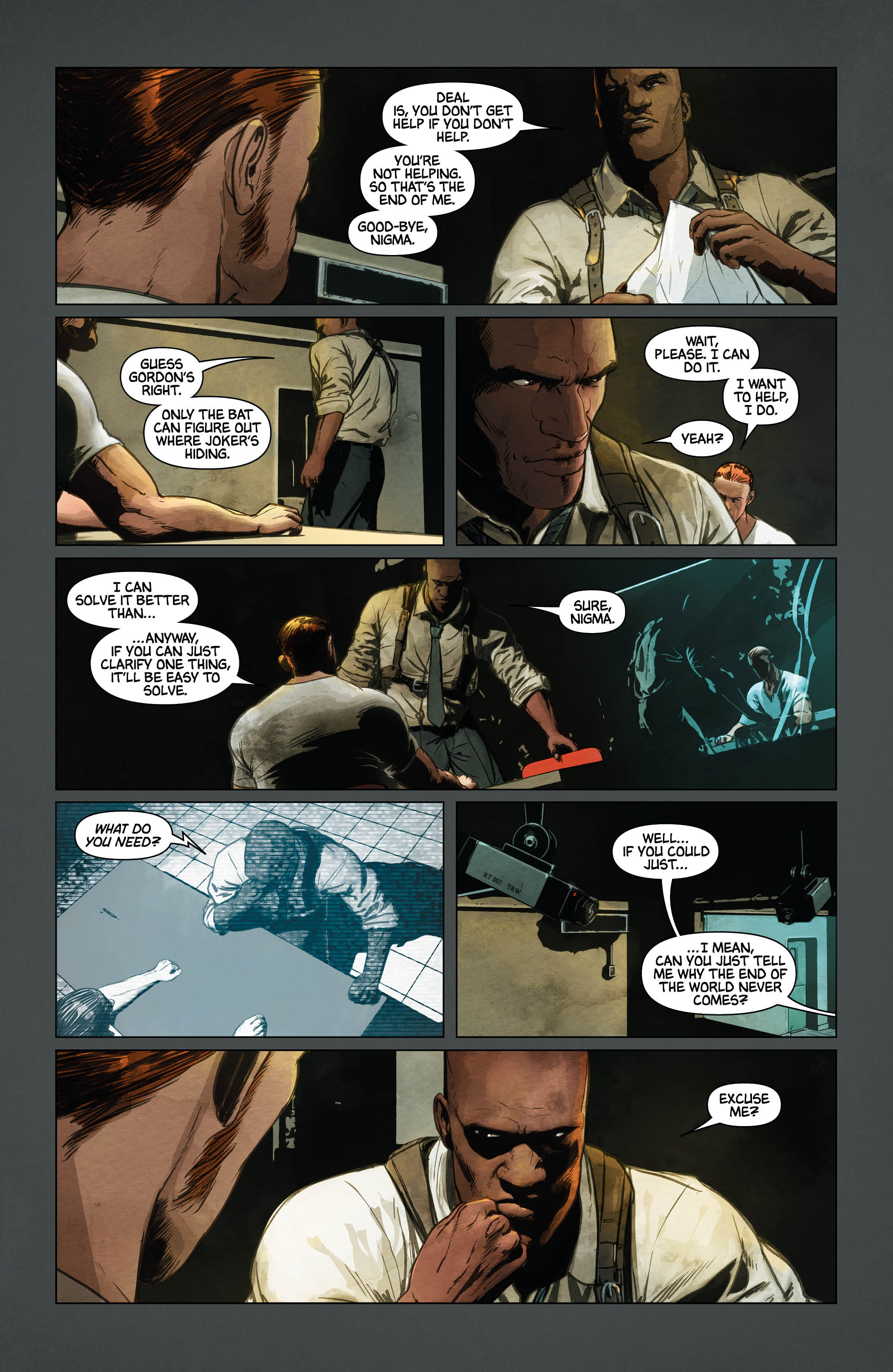 The setup is actually amazingly simple: a year into Batman’s career, the Joker can no longer laugh and the Riddler no longer enjoys riddles. Somehow, being thwarted by Batman has numbed them both to the things that once made them happy. All they can think about is killing the Dark Knight. This puts the two villains at odds, since they both want to be the ones to waste the Bat. So they go to war.

Batman’s barely in the issue at all, as the villains take center stage. While the Riddler gets some very creepy moments in #25 – including one that I felt went against the character’s usual M.O. – it’s really the Joker who shines in this first chapter. He’s as evil as ever, but his motives have changed. It’s not about poisoning Gotham’s water supply or simply killing as many people as possible. The dude is just trying to laugh. Throughout the issue, the Joker tells and listens to several jokes, but none of them land, which means someone has to die. It’s like King asked himself one evening, “What would happen if the Joker became depressed?” According to Bruce, the answer might be much more frightening than anyone could’ve imagined. 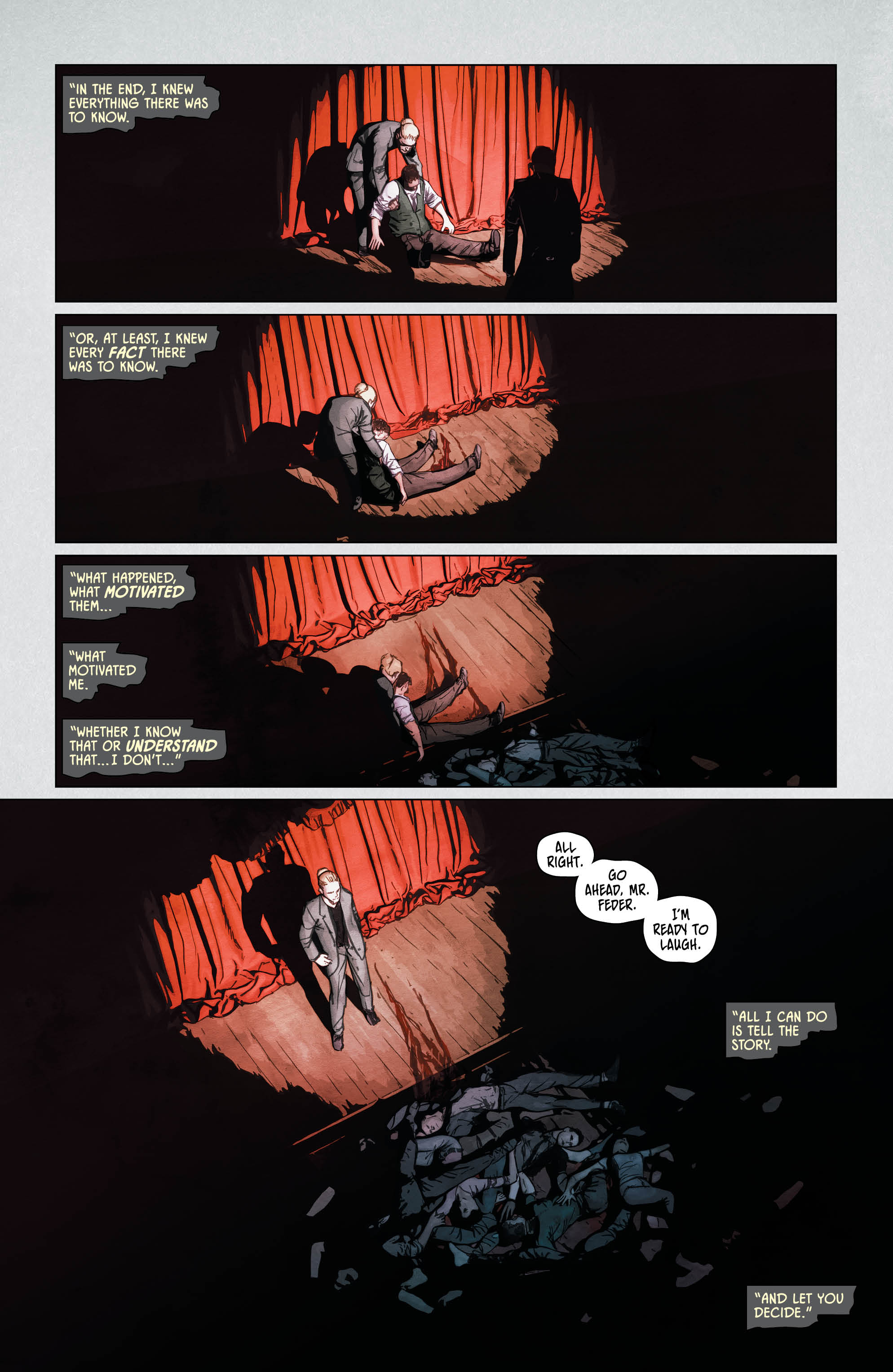 But even better than the writing is the art. Janin is quickly becoming this era’s foremost Batman artist. If the New 52 era of Batman is best exemplified by the work of Greg Capullo, then Rebirth will almost certainly be remembered by Janin’s pencils. While his page designs are a bit more controlled here – his layouts have been insane throughout this run and really a sight to see – it’s his facial expressions that really take the cake. Again, it’s the Joker’s scowling face that’s the star of the issue, and Janin depicts that perfectly, making the villain as unsettling as ever but also giving him a bit of a sad sack quality that’s not really been done with the character before. 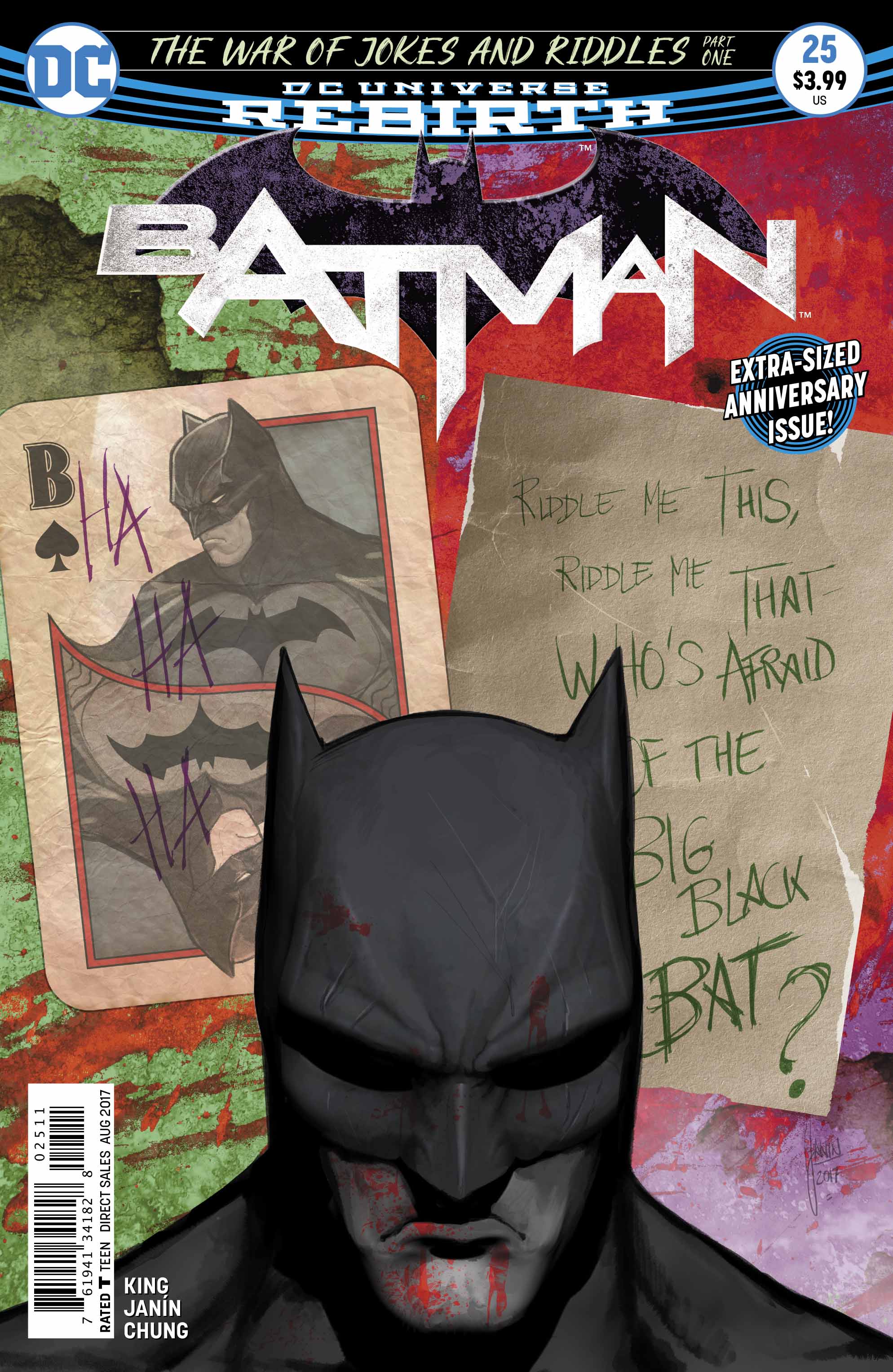 “The War of Jokes and Riddles” kicks off with a promising first issue. It’s a pretty violent opening too that seems indicative of the bloodshed that’s to come when these two forces of evil meet in the streets of Gotham. I seriously can’t wait.