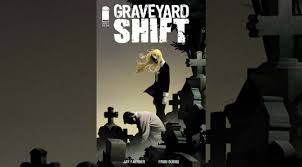 Welcome to the first Geeked Gods-Comic Debriefing report
So a few months ago I was at 4th world looking for comics, and picked up a comic Grave Yard Shift by Jay Faerber/Fran Bueno. I didn’t know much about the comic but since it was produced by Image I assumed it was a creator controlled comic and the cover spoke to me. As I started reading the comic a feeling of dread came over me, Vampires uh oh Vampire love story here we go all we needed was the vampires to sparkle…. However they do not and the love story is so well written that it adds to the story. Editor’s Note this is a limited series to 4 parts.
The Story
This story does not fit in one genre but like most great stories fits several. I would describe the Graveyard Shift as a romance, horror, mystery, crime story. What makes this story great is that it gives you a little of everything with no one genre overpowering the story.
The story focuses in a raid where a group of Police Officers serving an arrest warrant on a criminal unfortunately the criminal is a vampire. After the suspect is shot out of a window and into a harbor the Police Officers think the case is over but it isn’t. Each of the officers are killed leaving one left Liam, the comic then focuses on Liam and Hope having dinner when vampires strike thus the story begins. Ultimately the aftermath of the encounter leaves Hope a vampire and Liam recovering from his injuries. Liam and Hope work together to figure out how to stop her transformation while chasing the vampires who have harmed their lives. Now with one issue left in this series I cannot wait to see how this story wraps and I hope that the story continues…..
The Art
I don’t know how but somehow my years of collecting comics I missed Fran Bueno’s art work, I have to say I have become a new fan. I love the artwork in the Graveyard Shift. The style used makes the characters look amazing the lines and colors are perfect. The artwork adds to the story and gives a visual to what the main characters are going through. After reading these stories I went back and found some of the art done for Noble Causes, Faerber’s other book that Bueno did art for. Again I was impressed and I hope to see more artwork from Fran Bueno in other series in the future.
Recap
The Geeked Gods Score : 7.5/10
Pros
This is a great series and a different type of story that the typical superhero fare.
Pulls from several different genres and does them well.
Artwork and Color work are some of the best I have seen.
Cons
Character Development
My only con is that the characters of Liam and Hope would be a backstory and why they were targeted by the vampire clan in the first place was it a vendetta for attacking the first vampire or is there another reason why they were targeted.

The Point
This is a great series which will be concluding, I am hoping for a continuation of the series but we will see. The concluding issue of this series comes out April 1 if you haven’t picked up the series go down to your comic store and pick up the other issues you’ll be glad you did. If you do like the writing I suggest you pick up Copperhead also from Image written by Jay Faerber.
If you’re on the island pick it up at 4th world comics tell em thegeekedgods sent you.
-Ash

The Case for Reading Wonder Woman