This weekend came with the big news that Doctor Who is having its first female doctor! A casting decision fifty-four years in the making, it’s a massive shift for...
by Rachel Bellwoar July 19, 2017

This weekend came with the big news that Doctor Who is having its first female doctor! A casting decision fifty-four years in the making, it’s a massive shift for the series and one, minding the usual resistance, by those unhappy when an institution changes genders, that’s being widely celebrated. 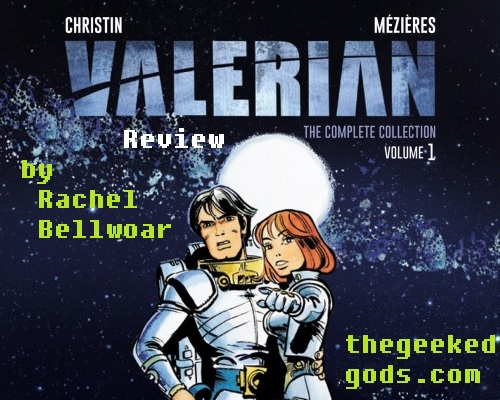 What many fans, or at least fans in America, may not realize is there’s another sci-fi institution hitting a milestone this week. Director, Luc Besson’s film, Valerian and the City of a Thousand Planets comes out in theaters this Friday and is based on the French comic book series Valerian and Laureline. Trailing Classic Who by just four years, the story first came out in 1967, and the series would go on for forty-three years until its ending in 2010. Written by Pierre Christin, with art by Jean-Claude Mézières, Cinebook is re-releasing the series in complete collection volumes.

Volume 1 contains the first three Valerian and Laureline books: “Bad Dreams,” “The City of Shifting Waters and Earth in Flames”  and “The Empire of a Thousand Planets.” It’s a smart business move, knowing that the film will bring eyes to the title, but what makes this edition feel definitive is the introductory content, which provides not only a history of the comic but looks at how other series have pilfered from Valerian over the years. There’s a page where they put panels from Valerian side by side with iconic images from Star Wars, and you can’t argue with the dates. Further incentive to buy the other volumes is provided with part one of an interview between Christin, Mézières, and Besson. Both for what gets discussed and the goodwill between them, it’s an encouraging signs for the movie.

What is Valerian and Laureline about?

Set on Earth, in the future capital of Galaxity, Valerian is a spatio-temporal agent, which means a person who can travel anywhere and anytime in space. One of the things that’s amusing about this world is the idealized peace that seems to exist there from the start. Basically, Earth has achieved ultimate laziness. The initial conflict in “Bad Dreams,” for instance, is that the programs that allowed civilians to choose and experience their favorite dreams all day were disrupted when their dreams superintendent, Xombul, did a runner. It’s Valerian’s job, as a spatio-temporal agent, to find Xombul, protect Earth, and preserve history.

Going off the trailer for Besson’s movie, and without knowing how the series develops, these early stories are less futuristic than one might’ve expected. Time travel is intrinsically sci-fi but “Bad Dreams” is set in the 11th century and “The City of Shifting Waters and Earth in Flames,” while apocalyptic, is set in the 80’s New York. The 80s were the future when this story was published but Valerian is restricted to the tools of the time period. Évelyne Tranlé’s coloring for the series also goes against the norm. Modern movies and shows have instated this vision of the future as white and metallic, but Valerian and Laureline is colorful.

It’s not a bad thing to have the technology limited either. You get these classic, Scooby Doo moments, like when Valerian and Laureline use a log to seesaw over a wall, or Laureline steps onto a trap door, that are better than the laser beam shootouts of countless space operas. The plots are incredibly imaginative. While Mézières’ monsters are more children’s book scary than actually scary, shattering backdrops, like the hills on the asteroid, Slohm, could make you cry. Scenes where backgrounds are continuous from panel to panel – Valerian running across the rooftops in New York – are engrossing, and while I don’t know if there’s a firm handle on the title characters yet, they’re enjoyable company.

The series feels ahead of the curve in its social consciousness and concern for environmental issues. Laureline, who Valerian meets in the 11th century, is a female protagonist ahead of her time. This doesn’t mean the comics are free of sexism (for the entirety of “Bad Dreams” Laureline has to call Valerian “stranger,” while she introduces herself by name) but the comic is usually the first to call itself out, with Laureline noting, “This kind of thing always happens to the girls!” There’s never any question of Laureline being equally capable, and when the day is saved, it’s Valerian and Laureline who are the heroes. For anyone concerned about a female Doctor, Valerian: The Complete Collection Volume 1 helps demonstrate that there’s nothing to fear.