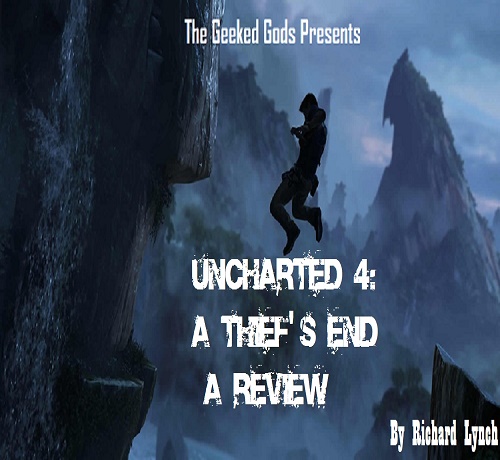 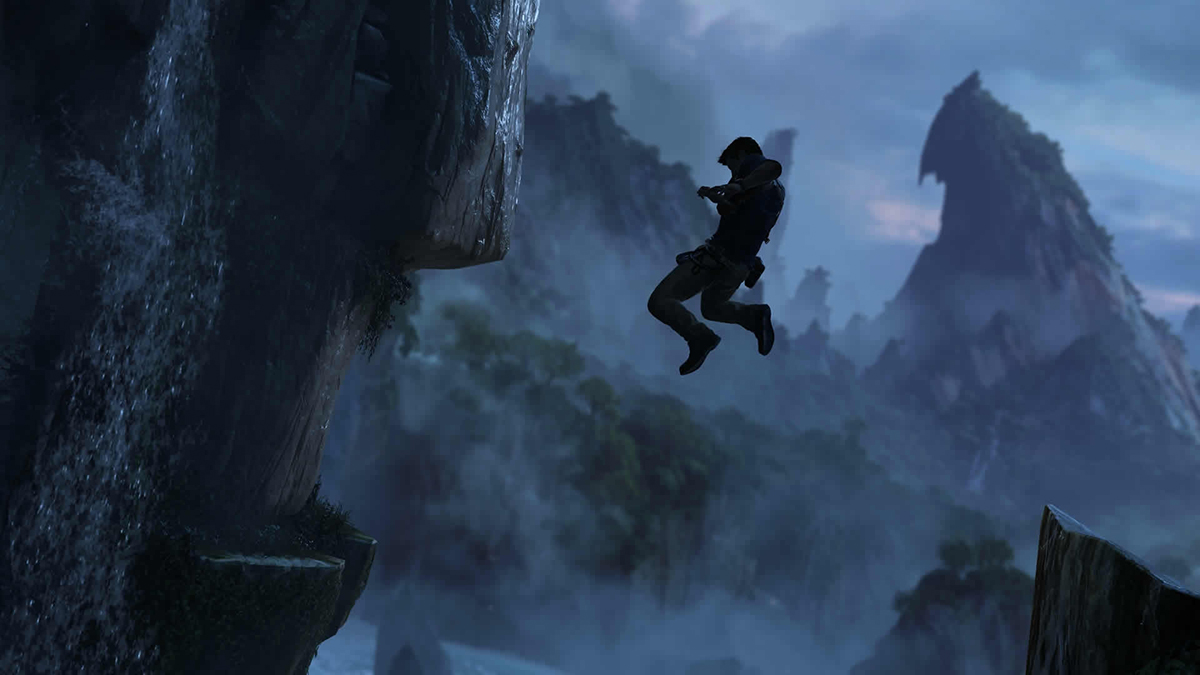 When the credits rolled on what is set to be Nathan Drake’s final adventure, it felt like the end of an era. Not only is it the end of Naughty Dog’s iconic Uncharted series but it felt like an acknowledgment that games like this truly might not work anymore. The game features the bombastic action and incredibly well-realized characters that players have come to expect from the series, but it all feel more mature as if the developers have decided that it’s finally time for the to grow up. And if this truly is the end of Uncharted, it couldn’t have been a better send-off.

The basic setup for the game is that Nate and Elena have finally settled down and given up the dangers of treasure hunting. It seems that Drake has at last managed to get his life together when somebody from his past inevitably shows up and pulls him back into a life violence and adventure. This time around it’s Nate’s thought to be dead brother, Sam who needs help finding money to pay back a raving lunatic that helped him break out of prison. The only way to help his brother is for the Drakes to track down the stolen treasure of Captain Avery. What follows is a globetrotting romp that brings players to some of the best locations the series has ever had. The pirate theme is also a welcome change of pace compared to previous entries where you would be tasked with finding some obscure lost city. The story isn’t the most original, but it does contain some of the best-written characters in the medium. Nate and Sam feel so natural together that you’ll instantly forget that Sam is an entirely new character who we’ve only just met; this is in part due to a fantastic performance by Troy Baker, who effortlessly slides into the role. The rest of the returning cast give career best performances across the board. 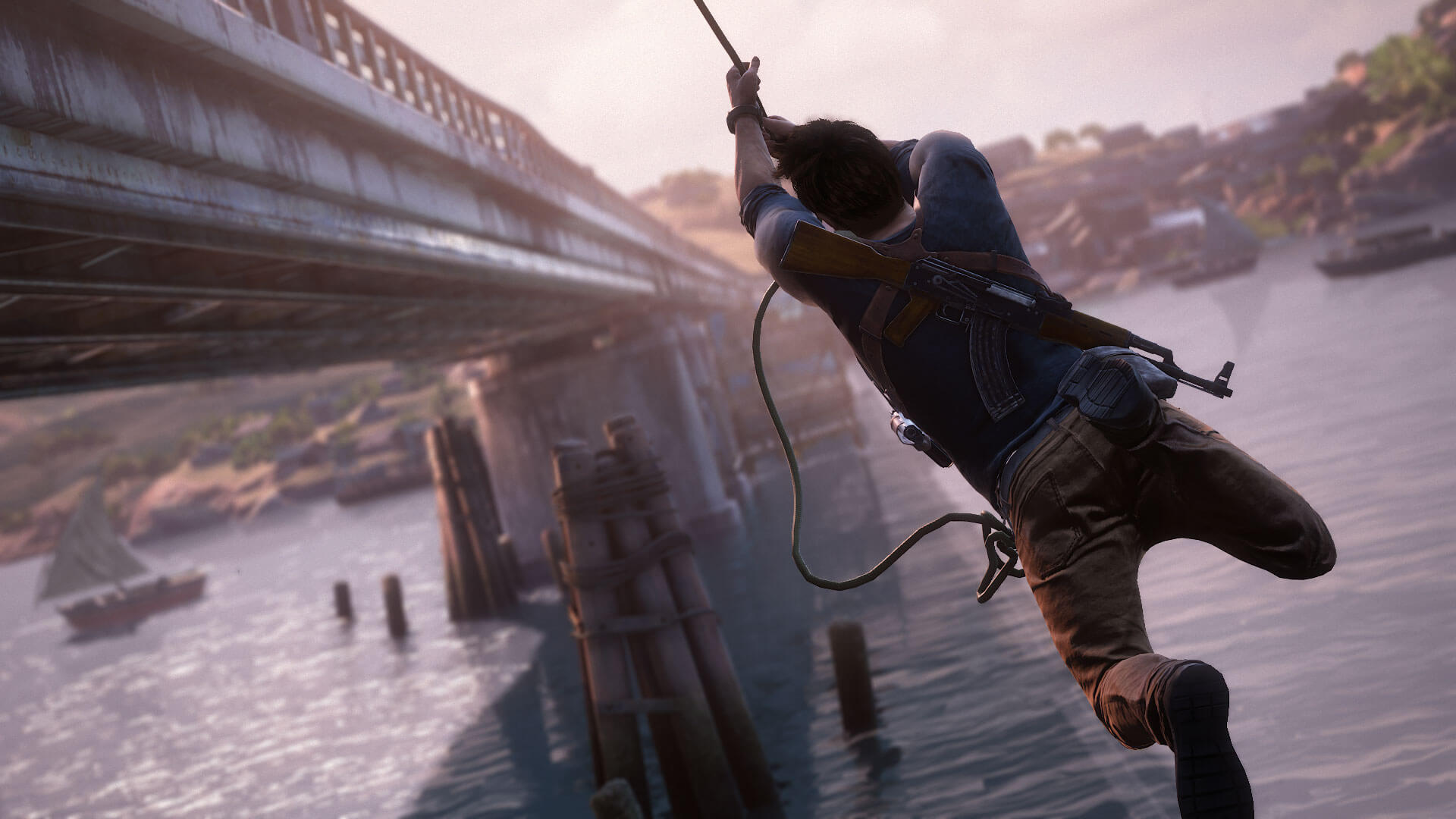 On a gameplay level everything feels instantly familiar, the basic loop of climbing giant set pieces and shooting your way through hordes of enemies is still in full effect. New to the series is a reworked stealth system that takes its inspiration from Naughty Dog’s previous game The Last of Us, this time around players can sneak around large play spaces stealth killing enemies and if they’re spotted it’s possible to dive back into cover and disappear. Stealth makes combat feel significantly easier when compared to some of the preposterously difficult shootouts of the previous games this is balanced out by having a greater amount of variety. Also new is the grappling hook the lets players fly across battlefields and adds a new twist to platforming, it’s a fun little addition that features heavily into the game. The jeep that has featured prominently in demos handles surprisingly well and does a lot to make the world feel huge. Besides car chases, it also features several interesting traversal puzzles. Speaking of puzzles, Uncharted 4 seems like it has more actual puzzles that the entire rest of the series combined. Gameplay is tied together by calm moments of exploration that let players take in the games truly breathtaking visuals. 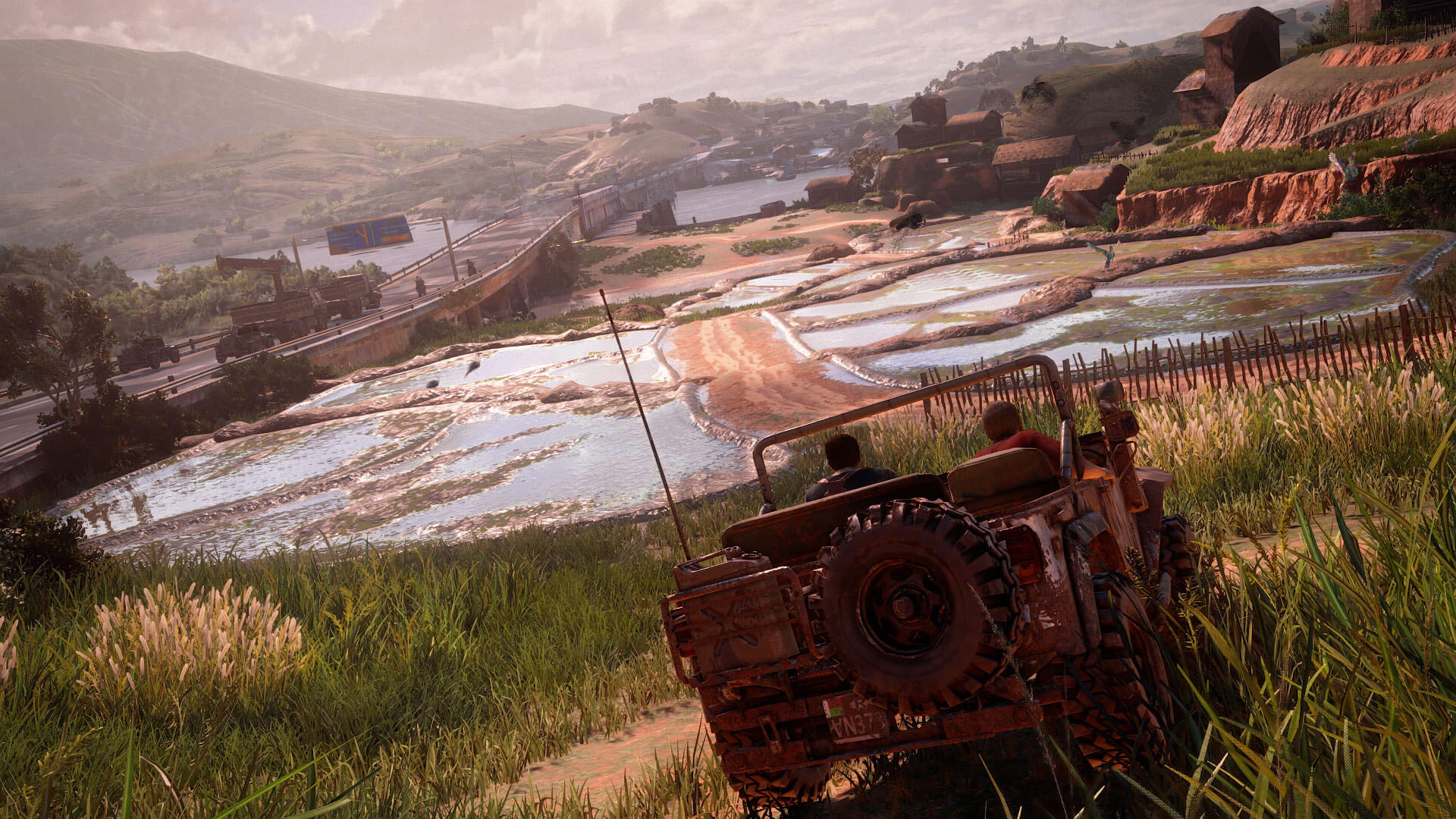 In previous games the moments players remember most are the insane set piece moments like the train in Uncharted 2, moments like these are back, but they are overshadowed by the character’s interactions with each other, you are almost always accompanied by a companion who fights and explore alongside you. These companion characters (another carryover from the Last of Us) are largely unobtrusive and can even be helpful at times. However, I do wish they wouldn’t immediately show me where to go anytime I took more than a few seconds to decide what jump to take, but that is a small complaint. Having these characters around is just an excuse to hear some excellent banter and get to know them better, and it never gets old. Uncharted 4 has multiplayer modes, but Uncharted multiplayer has never really been my thing, fans of that sort of thing will probably enjoy it just fine, but the real draw is the story. 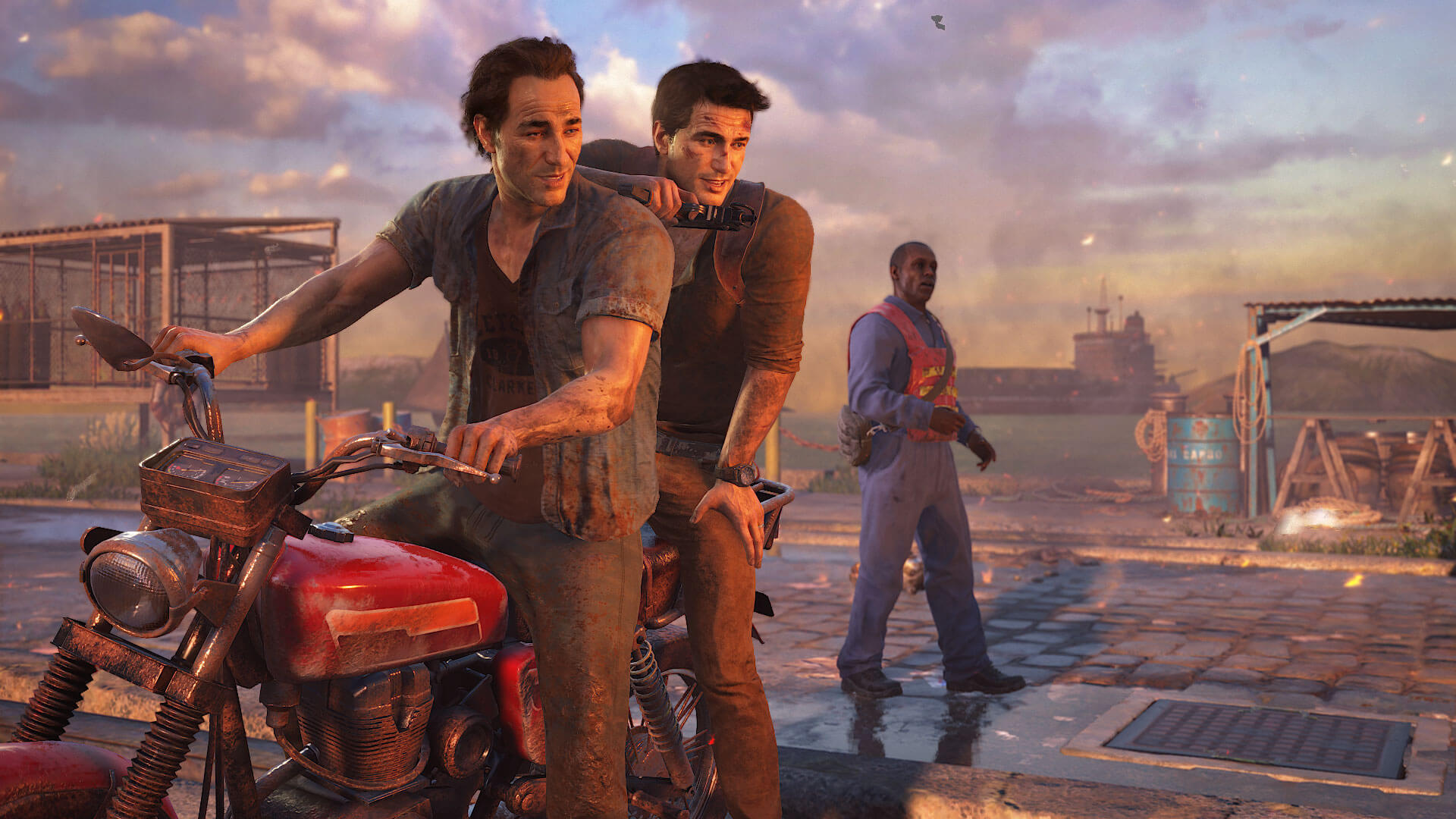 When I realized that I was nearly at the end of Uncharted 4 it was sad, I didn’t want to want to see these characters go. But as the screen faded out, it hit me that this was the perfect place for this series to end. Too often good franchises overstay their welcome until they become mundane. If this truly is the last time we see Nathan Drake, this will cement the series as something truly special. There will always be room for the series to come back but for now, it is the perfect closing chapter for a great series, and it’s worth every moment. 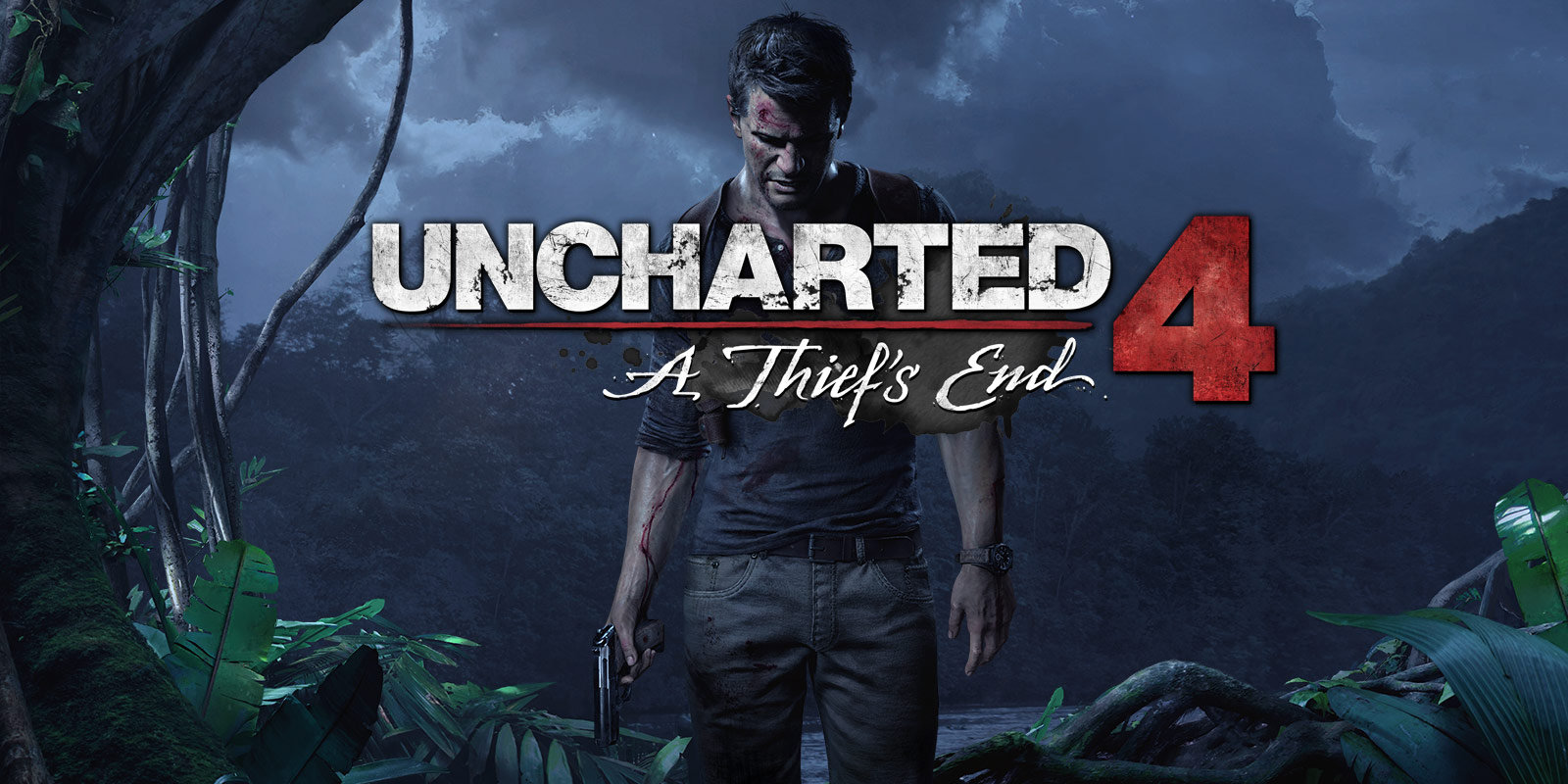