Why Non-Gamers Will Love TitansGrave By Tahlia Merrill Kirk @missmystra   If you’re a board gamer, I don’t have to convince you to watch Wil Wheaton’s new webseries, TitansGrave....

Why Non-Gamers Will Love TitansGrave

If you’re a board gamer, I don’t have to convince you to watch Wil Wheaton’s new webseries, TitansGrave. You’re either a fan already or you’ll watch the trailer posted below and immediately jump on the bandwagon. Check out the trailer here.

This is for those of you who have never tried an RPG like Dungeons and Dragons. Because, guess what? You’re gonna love TitansGrave too. It’s that good. 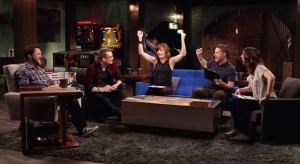 TitansGrave: Ashes of Valkana is a spinoff of Wheaton’s Youtube show “Tabletop”. Tabletop is incredibly popular among the board gaming community, but I imagine that it doesn’t appeal to non-gamers. Despite the high production quality and personable players, at the end of the day, it’s still 30-45 minutes of watching four people play a game…   Which you might think is exactly what TitansGrave is. After all, what’s the difference between watching four people play Ticket to Ride versus five people playing a RPG similar to Dungeons and Dragons? 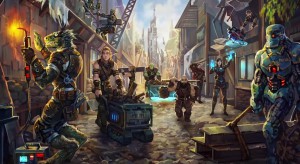 Well, if you watch the first thirty seconds of Episode 1, you’ll have a big chunk of your answer. TitansGrave boasts a vibrant soundtrack, professional artwork, and intricate worldbuilding. However, the true key to its greatness is super-savvy editing.

You see, there’s a reason I would normally not recommend watching an RPG session you can’t participate in it. It’s because, even seasoned players spend 80% of their time deliberating, cracking jokes, and generally getting sidetracked from the main plot. Honestly, that’s all part of the fun when you’re inside the game, but it’s not exactly thrilling entertainment for an outside observer. 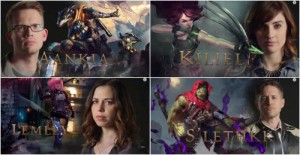 TitansGrave only keeps the interesting bits. I can only speculate how much footage got cut in order to produce each episode, but the result is sleek and appears effortless. Every second serves a purpose. The story’s beats are delivered smoothly and lovingly–yes, lovingly. This is a world that Wil and his son, Ryan, clearly spent many hours crafting and it’s abundantly clear that they’ve poured their hearts into making it special.

So if you want to watch an epic tale being woven before your very eyes, go check out TitansGrave. It’s funny, heartwarming, and downright entertaining. You think you’re just going to watch the first episode, but I guarantee you’ll end up binging on the entire season.

Do you have thoughts on this article, any tabletop games you want to let us know about tell us  in the comments below or you can tweet @missmystra or @thegeekedgods.