Thrawn (Star Wars) Review by Rich Lynch What happens when you take a classic rag to riches story, add in a healthy dose of Sherlock Holmes, and set it...
by Richard Lynch April 25, 2017

What happens when you take a classic rag to riches story, add in a healthy dose of Sherlock Holmes, and set it in the Star Wars galaxy? You get Thrawn, Timothy Zahn’s new origin story for one of the EU’s most enduring characters. It’s starting to feel almost silly to say, but Thrawn is yet another excellent addition to the Star Wars canon. But it’s not without its problems.

It seems like somebody at Disney desperately wants us to see the Galactic Empire without immediately throwing an “evil’ in at the beginning. In Thrawn, we get not just one but three different Imperial perspectives. Of course, being the titular character, Thrawn is the focus of the story; we follow Thrawn as he rises through the ranks of the Imperial Navy. While we learn what his character is like but he remains a mystery in many ways keeping secrets from characters and readers alike right through to the very end. We see most of Thrawn’s rise through the eyes of Eli Vanto, a cadet whose life is permanently shaped after crossing Thrawn’s path, he becomes a sort of Watson to Thrawn’s Sherlock. Lastly, we follow Arihnda Pryce, the future governor of Lothal as she navigates the harsh political climate of Coruscant. She helps to introduce many of the Imperial relationships that would come into play in Rebels.

The crux of the story centers around the identity of a mysterious criminal whom Thrawn takes an interest in. Through cunning and military genius, Thrawn rapidly ascends the rungs of the Navy at an insane pace, and begrudging earns the respect and admiration of his colleagues all while continuing to pull the threads of a mystery that nobody else seems able to understand. He does this all while overcoming the racial tensions and trust issues that come with being a nonhuman. While the racism angle can feel a bit heavy-handed at times, it’s an effective tool that instantly defines Thrawn’s relationship with all those around him, and in the end, it makes the galaxy feel more real.

A B-story about Price struggling with bureaucracy and slowly getting corrupted by the political system. When she’s not working, we see something that rarely happens in Star Wars, Imperial citizens actually having fun. There are galas, and fancy restaurants and things only seem to get better as Price becomes more influential. It’s strange seeing Imperials in such a hopeful light, at least until it all comes crashing down. While the story of Governor Price is enjoyable and, in fact, has some of the book’s best moments, it feels out of place in what should be Thrawn’s story. Eventually, their paths do come together, but it never can help but feel like more than a forced tie-in to Rebels.

Strangely, the most interesting part of the story is the mystery that the story doesn’t tell you is a mystery. The mystery of why Eli Vanto is there at all. As an unwilling participant in Thrawn’s game, it hardly makes any sense for him to be included in any plans at all, yet he is persistently dragged along. An attentive reader will spot clues through the entire story, and when the reason for Vanto’s presence is made clear, it becomes a satisfying conclusion that reveals both Thrawn and Zahn’s cleverness. 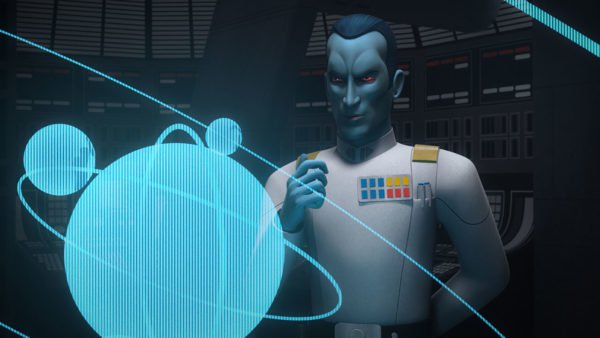 In the end, Thrawn is a fun book that does little to change Star Wars. Filled with intriguing characters, it’s an excellent introduction to many characters we saw in Rebels season 3. These are the sort of stories that have always made the Star Wars galaxy feel like a living breathing place, and Thrawn is a welcome addition to that legacy.