Now we all know the beloved TV show The Walking Dead, what some don’t know is that it is adapted from a comic series. What changes did they make when adapting it for Television, and how much do they really affect the storyline. Well, here are some of the differences between The Walking Dead comic, and the TV show. 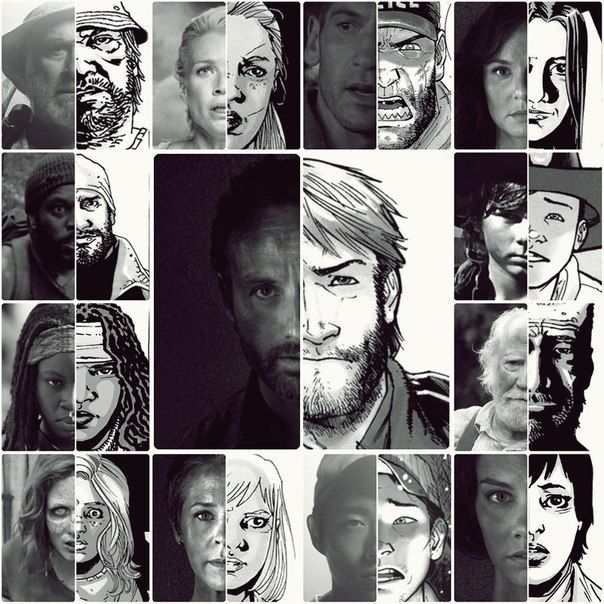 I know I can’t list out every single character’s death from the comic and pick apart the differences, but sometimes one character’s death is switched with another, or their killed differently or not at all. The first person to go is Shane.

Don’t we all just love Shane, and his psychotic mind ravaged by what the world has become? In the comics, Shane is shot in the neck by Carl who followed him and Rick into the woods and kills Shane just as he was about to pull the trigger on Rick. Rick, after learning that everyone is infected later returns to Shane’s grave to shoot his buried reanimated corpse. The show reverses the flow of events having Rick stab Shane in the side, forcing him to the ground until he dies, only for Carl to shoot Shanes zombified form before he bites Rick.

The next major character death which differs is Carol. In the show, Carol is still alive and seems to be facing her demons. Comic book Carol is much younger than our badass Carol on TV, as well as having many more mental issues having attempted suicide twice, the second time successfully. After losing the respect of many people in the group, Carol approaches a walker spilling her heart out to it and allowing it to bite her stating, “I really hope you like me. (…) Oh, good… You do like me.” After dying in Tyreese’s arms, she is swiftly stopped from reanimating by Andrea.

Tyreese is another major character whose death was swapped out for someone else in the show. During the Governor’s second attempt to take the prison, having lost Woodbury and all its citizens, he kidnaps Tyreese has him beaten and presents him to the group as a bargaining chip. After Rick’s group decides not to give into the governor’s wishes he uses Michonne’s katana to slowly decapitate Tyreese, thus sparking the end of the prison. His reanimated head is taken out by Michonne after the prison falls.

the woman with so few fans the count is in the negatives did not, in fact, die during childbirth, but devoted almost all her time and energy to her newborn. Judith was not alive for long when the Governor attacked the Prison. Lori fled holding Judith only to be shot and killed by Lilly Caul, her dead body falling and crushing her still newborn baby Judith. Happily enough Judith is still alive on TV, cause we all know what dead baby’s do to ratings.

Dale Horvath, the moral compass of seasons 1 and 2 of the television show lasted quite a bit longer in the comic series. While the tv series wrote him off in season two (per the actor, Jeffrey DeMunn’s, request), the comic books kept him alive for quite a while longer. Dale ends up bitten on the shoulder by zombies and is taken by the Hunters. The Hunters begin eating him piece by piece (like the remaining survivors of Terminus with Bob on TV), though he laughs at them for eating his ‘infected meat,’ they furiously beat him up and leave him for Rick and the other’s to find. He is later shot by Andrea before reanimation.

Morgan Jones is still alive on Television, but in the land of comics, he is dead as just about everybody else in the apocalypse. After Alexandria is overrun by walkers, he gets bit in the arm, and while Michonne did amputate it with her Katana, it is unknown if she did it in time before the infection spread. After the amputation, Carl is set to guard Morgan should he die and reanimate; however, it is Michonne who ends up killing him as he dies from either blood loss or fever.

We all know the complete and utter asshole (that’s putting it lightly) Negan, and in the show, he put down both Abraham and Glenn with his Baseball bat Lucille. In the comics; however, it is only Glenn who receives this heinous death sentence. Abraham, instead of Denise, is shot in the head through the eye by Dwight as he talks about Rosita with Eugene on their way to the factory.

Despite that she doesn’t get an arrow through the eye, Denise does meet her death at the hands of a walker, and is later put down by Michonne to prevent reanimation.

The Walking Dead is famously known to have begun its story in Georgia, specifically King County GA, when Rick Grimes wakes from a Coma to find the world has gone to shit. While the world did go to shit, Georgia is not where Rick finds himself in the comic series. The Grimes family originally hails from Cynthiana, Kentucky. Once the outbreak started, Lori took Carl and fled with Shane (though she felt increasingly guilty about leaving her husband). Once Rick wakes from his coma he does head straight to Atlanta from Kentucky to find his family, though the drive would have been a lot longer. The Show decided to find a new place to begin the story and came up with the fictional location of King County in Georgia (I’m sure Rick appreciates the shorter drive), though Cynthiana, Kentucky is a real place. The Hospital Rick woke up in is real too, and no changes were made to its name from real life to comics to Television Show.

It doesn’t take long for another location to differ between Comics and TV, as the CDC is never even visited in the comics. The group instead heads to Wiltshire Estates in the hopes of clearing it out to make it home though they are driven out within a couple of days due to the overabundant number of Walkers. Wiltshire Estates does make a brief appearance in season 2 of TWD episode ‘Secrets’ when Shane and Andrea search it in hopes of finding Sophia. 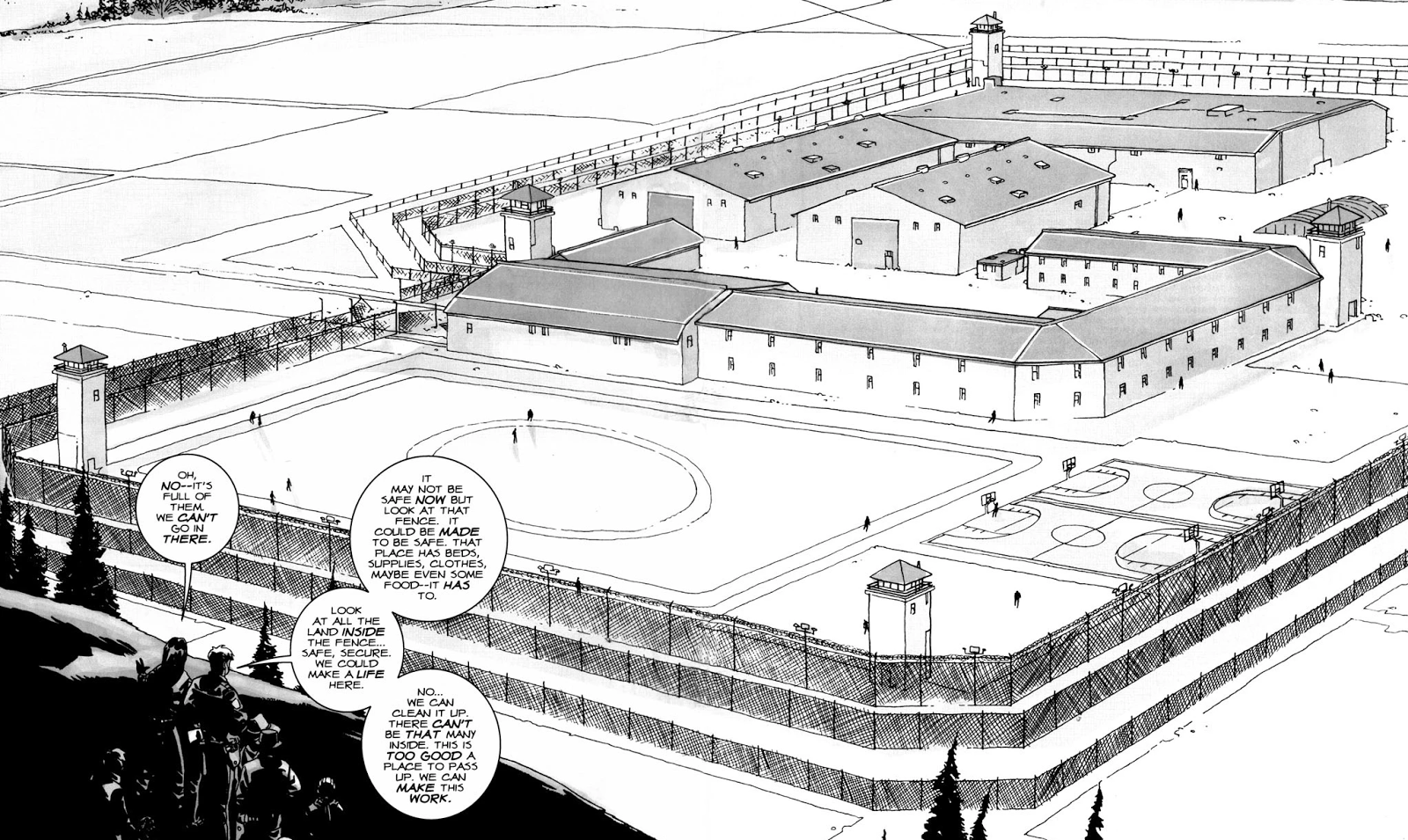 After being run off the Greene Family Farm by walkers, the group finds a prison. In the comics, Dale and Andrea find it while on TV Rick and Daryl stumble upon it. The name of the prison in the comics is the Meriweather County Correctional Facility (which is a real place in GA), while on TV it is the West Georgia Correctional Facility (also a real place in GA). Grady Memorial Hospital where Beth Greene stays for a while before her death is never mentioned in the comics; however after that most major locations the group visits or calls home are the same, Woodbury, Washington D.C., etc. Two minor differing locations are the National Guard camp the Governor destroys, while in the comics it’s a National Guard Station that Rick raids and blows up to prevent the governor from raiding it further; Father Gabriel’s church, known in the show as St. Sarah’s church.

Here are just a few other differences to look at:

Rick Grimes loses his hand in his first encounter with the Governor in the comics. In an attempt to show how serious he is the Governor saws off Rick’s hand with a knife, giving him a handicap for a while until he learns how to shoot with his other hand.

While Herschel had plenty of kids and Maggie is one of them in both comics and on TV, Beth is not. Not one of Herschel’s children has a name that’s even close to Beth (unless you count Billy), and all but Maggie die by the end of the Prison story arc including Herschel himself.

Not only is Beth Greene and made for TV character, but our favorite crossbow-wielding redneck is as well. That’s right Daryl does not exist in the comics universe, and neither does his brother Merle. Yes, I know it’s sad then you get over it because… Norman Reedus, am I right?!

Sophia isn’t dead! Remember Herschel’s farm when half the time they were looking for Sophia and the other half they were twiddling their thumbs? Well, no one had to search for her in the comics, and she is, in fact, one of the very few original Atlanta survivors alive in the comics, along with Rick, Andrea, and Carl.