Wonder Woman hits theaters today and for the love of Hera go out and see this movie! Gal Godot shines at the center of the charming, often funny and...
by James O'Donnell June 5, 2017

Wonder Woman hits theaters today and for the love of Hera go out and see this movie! Gal Godot shines at the center of the charming, often funny and action packed gem that may finally set the DCEU on the course Man of Steel first charted four summers ago. Patty Jenkins breaks new ground for herself and for women everywhere as only the second female director ever to work with a $100+ budget (the other was Oscar winner Kathryn Bigelow) and the first woman to ever direct a major super hero firm, no less one that stars the most recognizable female superhero of all time.

As I often do with these reviews I will try to give an honest and upfront review and leave the spoilers for later, so watch for the jump if you’re looking for surprises when you sit down to watch Diana open up a can of whoop ass on the entire first world war.

I’ll start out by saying that this movie reminded me of two of my favorite films in the genre but with noticeable improvements. First was her DC counterpart and Justice League pal’s turn in Batman Begins. There was a lot of back-story that gives the viewer a good understanding of the culture that Diana comes from, the legends that she believes in and the warrior spirit that she embodies. And much like Begins, the audience is teased several times before the title character appears in full ass-kicking glory (and it’s totally worth the wait). The other film that I was reminded of was Marvel’s Captain America: The First Avenger. There are the obvious comparisons, a wide-eyed protagonist enters one of the two world wars and fights the bad guys (aka Germany). Along the way he/she learns valuable lessons and kicks several asses, good times had by all. But Jenkins, along with writers Alan Heinberg, Jason Fuchs and (gasp) Zach Snyder, did a much better job of portraying the horrors of war. Throughout the film she was able to convey the strife that a major conflict like this causes in a way that the former film never thought necessary. On her journey she sees refugees displaced by war, the death of innocent people and devastation of escalated conflict. This serves as motivation for our hero to complete her mission and end the war, but it also gives her an interesting complexity that has been missing in superhero films since Christopher Nolan ended his Dark Knight Trilogy in 2012.

The chemistry between the leads in this film is absolutely infectious. Gadot is perfectly cast is a well educated and wise warrior princess naive to the larger world partnered up with the prudish but charming Chris Pine (Steve Trevor). It was so much fun watching Pine’s character squirm at Diana’s blunt questioning as he seemingly tried to resist her inherent magnetism. Other stand out performances included Robin Wright’s General Antiope, Elena Anaya’s Doctor Poison, Lucy Davis’ Etta Candy, and Said Taghmaoui’s Sameer. 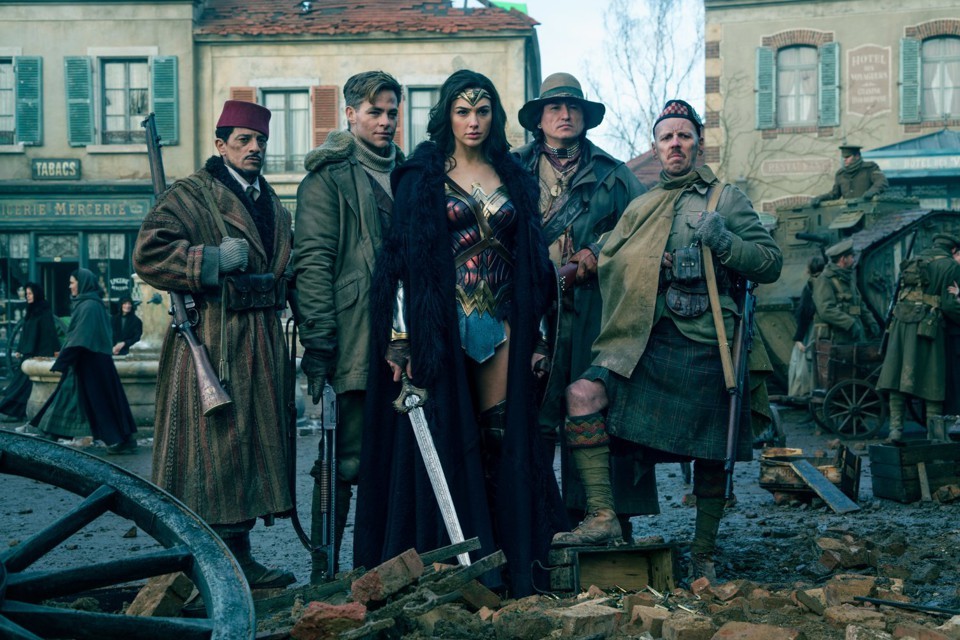 Jenkins was absolutely masterful behind the camera, framing up adrenaline pumping action sequences and at times Kubrick-like establishing shots. Two that come to mind, in particular, are the overhead angle during the ballroom scene (shown in the trailer) and the Injustice-like super slow-mo moments during several of the fights. The action sequences in this film were some of the best ever in a superhero film, which just proves that in order for Warner Brothers to produce visually stunning fight scenes, they should look no further than their game franchises (See: Batman warehouse fight in Batman v Superman).

All in all I’d say this was probably the best outing so far for the DCEU (though I liked the director’s cut of BvS, so what do I know?). Wonder Woman is a likeable hero that’s not constantly brooding over dead parents or being an alien and she straight up kicks ass. Go out and see it! Also FYI there is no post-credits scene. This is DC after all.