The Normals #5-This must be the Place a review

The Normals #5-There is a Place a review By Ashish Thomas What would you do if everything you’ve ever known turns out to be a lie, whats worse that...
by Ashish September 27, 2017

The Normals #5-There is a Place a review

What would you do if everything you’ve ever known turns out to be a lie, whats worse that you and your family may not even be human?

This series is the second by Adam Glass for AfterShock Comics; the series has been bustling to a finale today we’re going to look at the Penultimate Issue of the first arc of The Normals out tomorrow 9/27/2017. Check out our previous reviews of the series here and Issue 4 review here. The family is on the run from Westing Incorporated.

The Issue kicks off with the family following the trail from the previous issue going to 754 Brady Avenue. Upon arrival at 754 Brady Avenue, the family finds two dead bodies and flees.  A little while after leaving the crime scene the normals were stopped by a police officer. The whole family works together to convince the cop nothing is wrong and get away. The cop asks why the Normals were across the street from the crime scene and they find out the woman Brenda Steele is accused of murdering her two tenants.

Later the family finds shelter at a motel Adian hacks the police department, figuring out how Jack’s program work’s and how to find other automatons.  Aidan thinks Brenda Steele is an automaton as she killed two people with her bare hands. Jack looks at the program says abilities can be unlocked, Jack and Mary search Brenda Steele’s place to find out if she is an automaton leaving the kids at the Motel. At Brenda Steele’s home, they find that she move to the town shortly after the program started and she seemed to have bowls of ice cream and pickles around.  Back at the Motel Josephine disobey’s her parents and leaves the motel room due to boredom. Later we see Jack back at Brenda’s discussing whether to awaken her when they discover that the murder might have been a love triangle.

Back at the Motel Josephine has caught the attention of two boys who follow her back to their hotel room threatening Aiden Josephine. At the same time, Jack and Mary are at the morgue discussing what they found discovering Brenda’s secret. We see the victim Wanda is the automaton, not Brenda. After being awoken, Wanda tells what happened how Brenda attacked. Wanda then chooses to be shut down rather than live a life without Lester, the other victim. 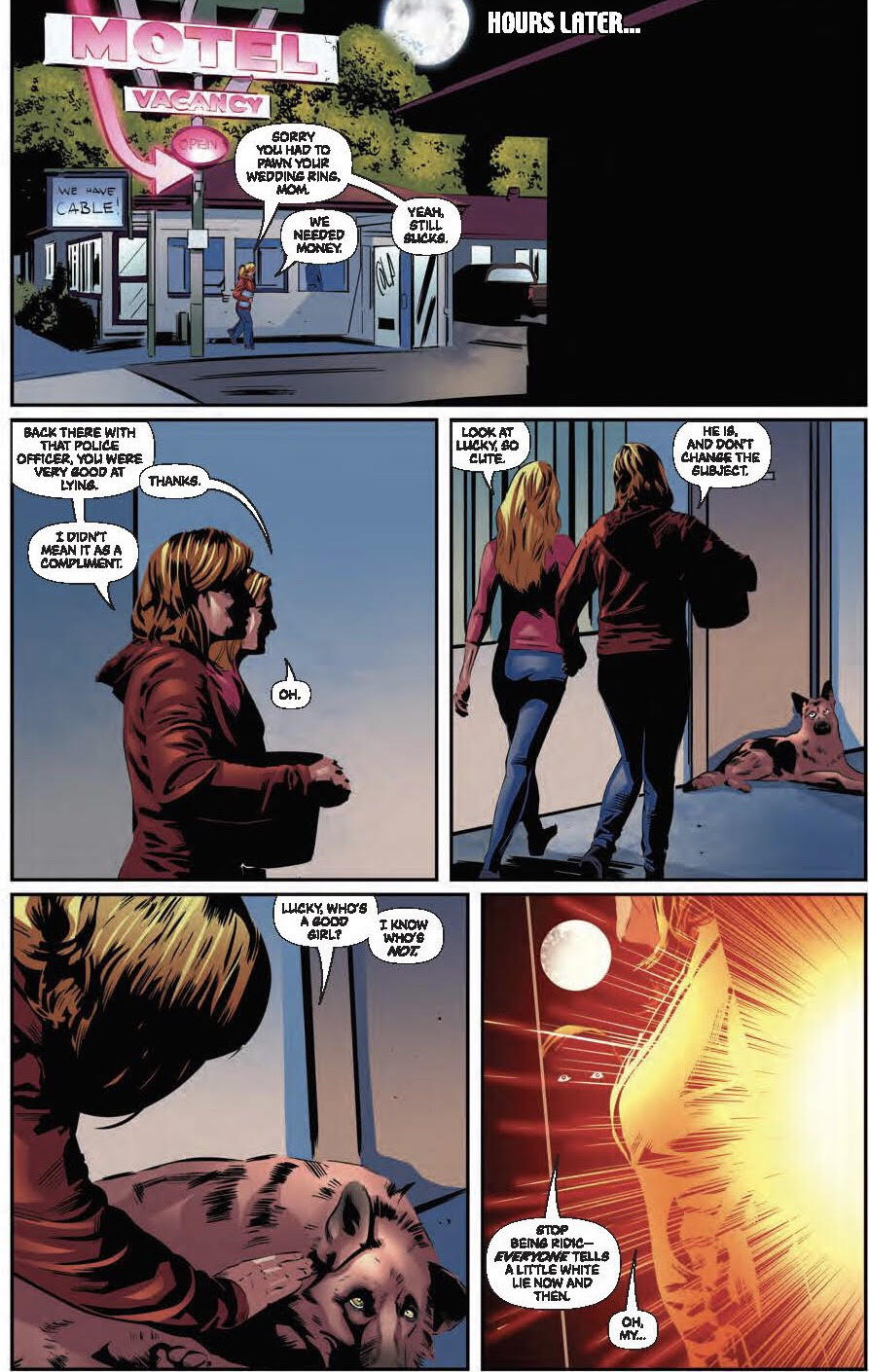 Back at the Motel, we see a man come upon the two boys harassing Josephine and Aidan. He stops the kids through violent means.  Later Jack and Mary driving back discuss how sweet Wanda was, and Jack talks about their relationship. Mary says they can work on getting their relationship back. When they pull up to the motel, they see the kids being abducted with a caption to be concluded.

Issue #5 is the penultimate issue of the first arc of The Normals. Adam Glass has concocted a wonderful story filled with intriguing mystery, drama, action and some comedy. This issue feels like we’re almost ready to get many of the mysteries of the Normals will be revealed.  There are major revelations in this issue that if you’re not paying attention, you could miss them. Dennis Calero’s art continues to make the Normals shine his ability to have some many characters and locations making all look stunning. The Colorwork of Adriano Augusto is also fantastic and adds major depth to the story. Both Dennis Calero’s art and Adriano Augusto’s color makes Normals one of the best-looking comics. Normals is a great series one with great depth that should be read multiple times do yourself a favor and pick up Normals #5 tomorrow. 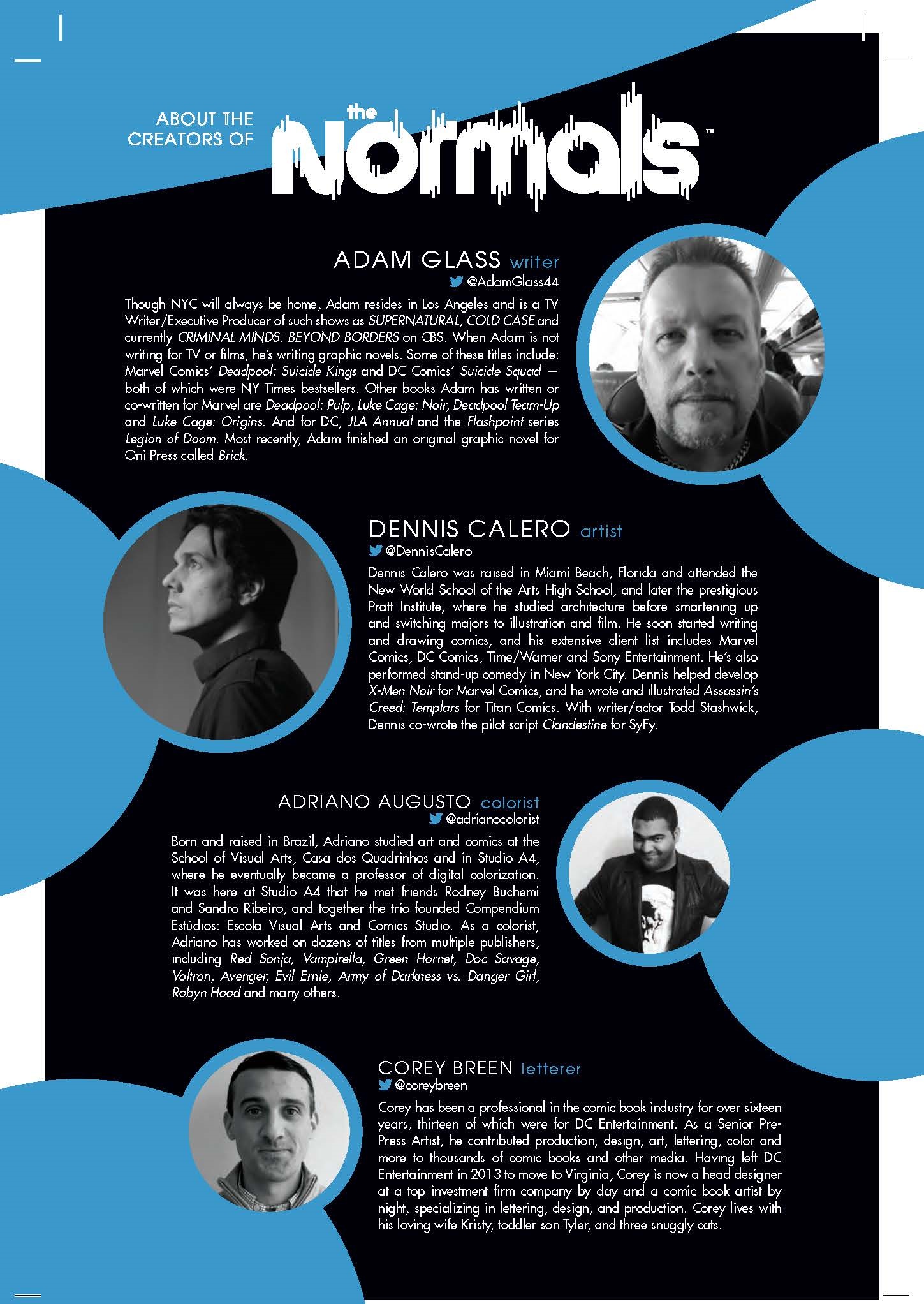