The Legend of Zelda: Majora’s Mask Retrospective I don’t think that there is a person on this earth who loves video games that will tell you Ocarina of Time... 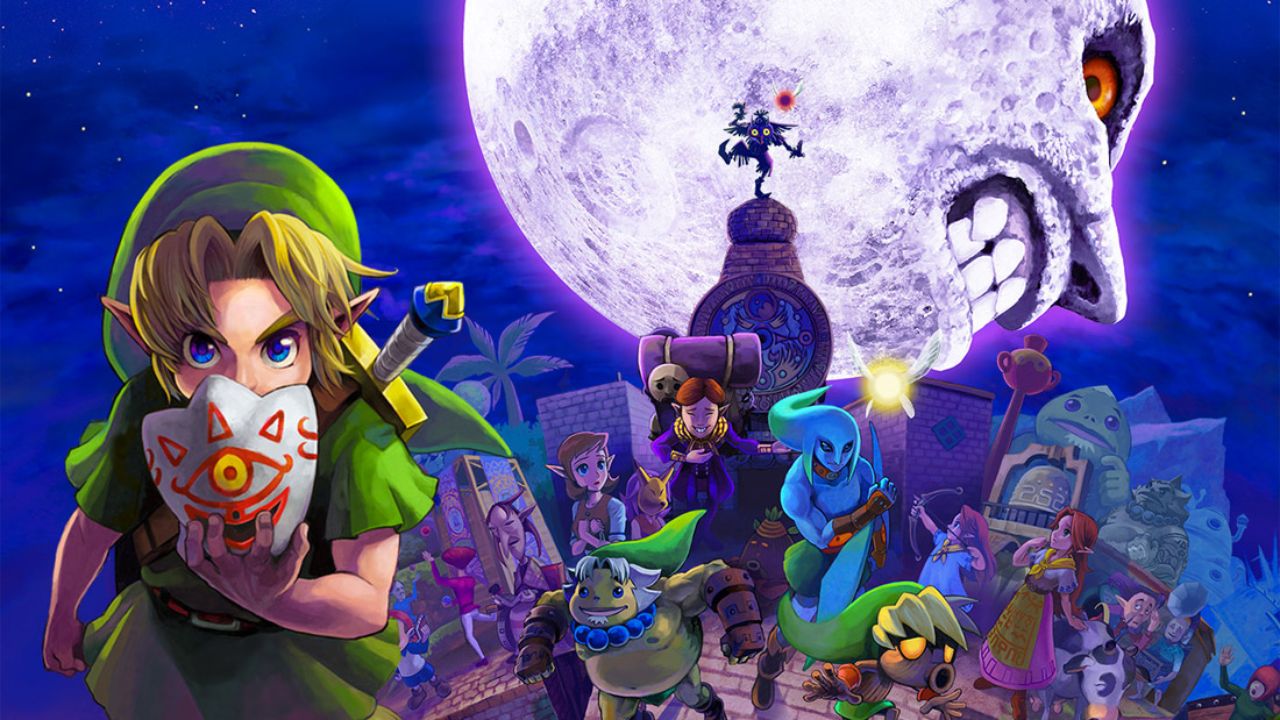 I don’t think that there is a person on this earth who loves video games that will tell you Ocarina of Time is not one of the greatest games ever made. It’s just not logical to think that; even if you’re not a fan of the story and fantasy-esque games, the technical innovation alone that carried the game was groundbreaking and must be commended for that, if nothing else. I could rant and rave for hours on end about Ocarina (as I did here), but that’s not what I’d like to discuss. Instead, we’re here to talk about the successor to the game, the second and final Legend of Zelda game to be created for the Nintendo 64: the mysterious, challenging adventure that is The Legend of Zelda: Majora’s Mask.

While many of you may simply remember how much fun the game is from your childhood, the difficulty factor of this incredibly strange game often fizzles away with nostalgia. During my most recent playthrough, I realized very quickly that Majora’s Mask is one seriously challenging game. I’m not talking about combat difficulty, either; I’m talking about the complexity of the puzzles and secrets that the player has to figure out in order to advance in this fictional world. Many games have secrets that will allow you to reach some sort of hidden wonders that are there for players that want more out of a game. In Majora’s Mask, you don’t have a choice. They are essential; the lifesblood of the game itself. 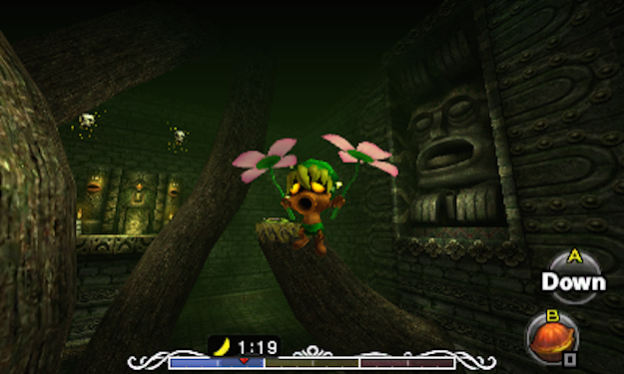 These secrets are generally solved using the vast amount of different items and masks that Link can acquire. Most of these masks have certain special powers in themselves, turning Link from a child to a grown Zora, able to swim underwater and fight with special blades from the fins of his arms, or even to a little Deku Scrubs, a funny little woodland creature that’s capable of blowing bubbles and using the leaves on his head to float about the world, allowing Link to access otherwise impossible areas. Changing Link into these various forms creates a very strange world to be immersed in for sure, but the strangest occurrence actually involves aliens and cows on a farm, and no, I’m not making this up. If you don’t remember this, that’s completely reasonable…nevertheless, it’s a hilarious and strange quirk that I’m infinitely grateful for.

One of the ways in Majora’s Mask greatly differs from the previous installment is the big ol’ moon hanging over you at all times – or, more like falling directly into you. Link has three days to fight and solve his way through four separate dungeons and summon four giants to stop the moon from colliding with this alternate Hyrule, which is called Termina. As if the oncoming apocalypse isn’t scary enough, it’s amplified tenfold by the look on the moon’s face. Seriously…look at that damn thing. It’s terrifying. Exploiting time through the use of songs played on the Ocarina is another theme that’s explored further in this game, much like its predecessor, and an interesting aspect in MM is how you can slow down the three days so there’s much less pressure on you to finish these dungeons quickly. Time, it seems, is very important to the developers in this game series. 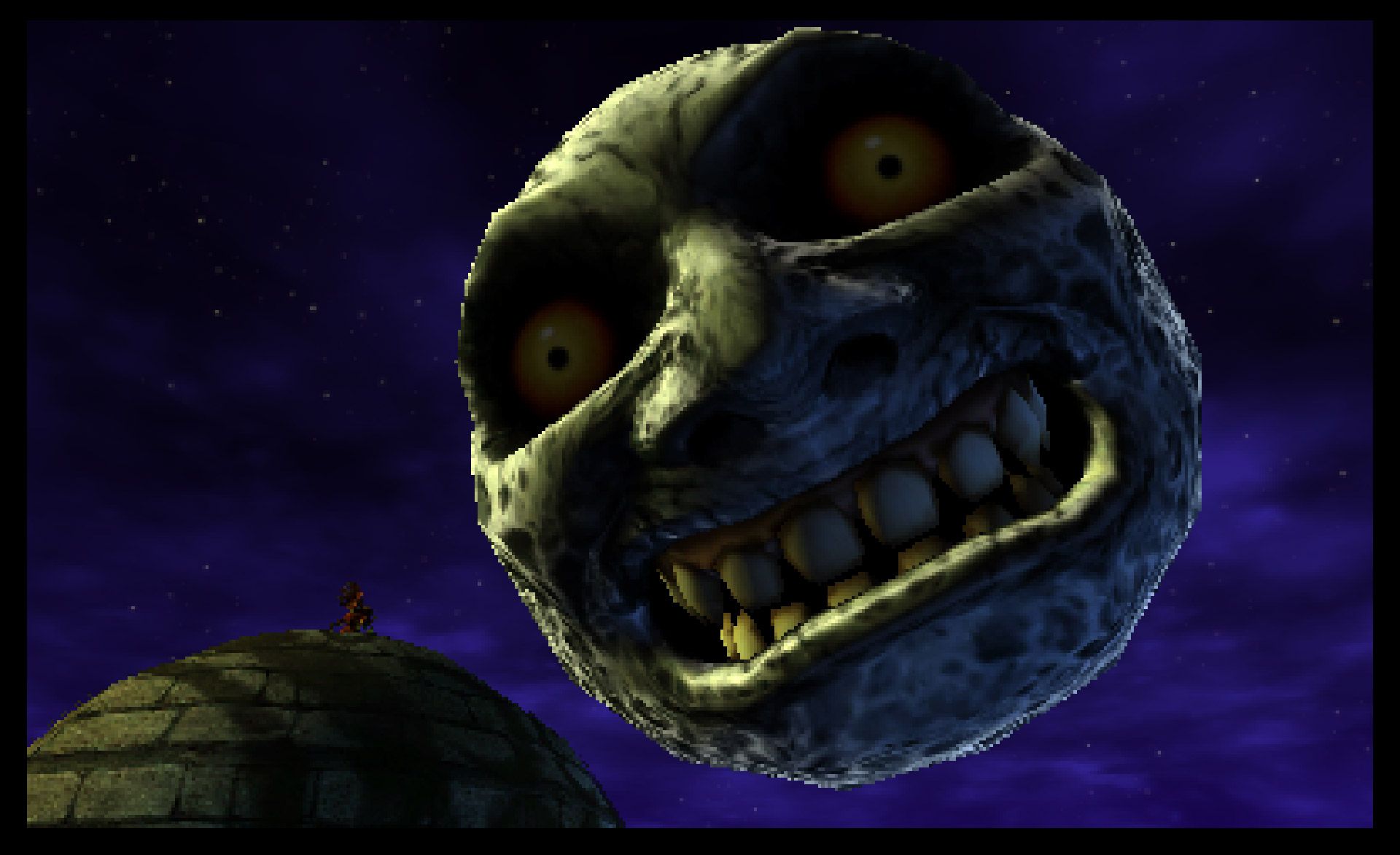 Much like Ocarina, the story is one of the core aspects of this game’s success. It’s beautiful and moving with a serious emotional side, just like you’d expect from a Zelda title. One of the most important decisions by game devs in this instance was to not have the adventure continue in Hyrule. In Ocarina of Time, Link has just defeated Ganon and saved Hyrule from enslavement. There’s something that has always irked in me video games when the story keeps repeating itself in the same timeframe…I.e., a hero defeats a master villain and a new threat comes back some time down the road. In this series, they’ve always made an attempt to do somewhat of the same story but to have it come about in a way that is atypical for an adventure game. Yes, you are always Link, and you are almost always trying to save Hyrule, but it’s always been after numerous generations; Link becomes a legend, The Hero of Time, and it is a boy in his lineage which needs to fend off the coming attack from Ganon. I’d always admired how it was never the same Link, and that one Link’s story was done, it was done. While Majora’s Mask is, in fact, a direct sequel and does include the same Link from the previous game, they transport Link into an alternate world and have the story take place there. Maybe it’s just a small caveat to many players, but for me, the fact that this Link continued his adventure in a place other than the normal Hyrule that we’ve all come to know and love was extremely important to me. So, there. I’m nitpicky, I know, but I’m happy that way. Bite me!

The graphics had also improved considerably, which is always a good thing in a game franchise. It’s funny how at the time, The Legend of Zelda was pioneering the 3D graphics system when it came from such a simple format; the franchise has never really come close to the technical innovation found in the two games for the Nintendo 64 again. This isn’t to say that the games to come after would not be excellent…they simply did not push the boundaries the same way that these two games in the franchise did.

While the game most certainly does differ from Ocarina of Time, choosing which is better really comes down to personal preference. For me, the previous game is perfect and cannot be topped; it’s lightning in a bottle. Still, there are many who will always choose Majora’s Mask as the definitive Legend of Zelda game, and you won’t hear an argument from me about it. The point is valid. They’re both absolutely stunning. If you’ve never played Majora’s Mask, you’re only hurting yourself. 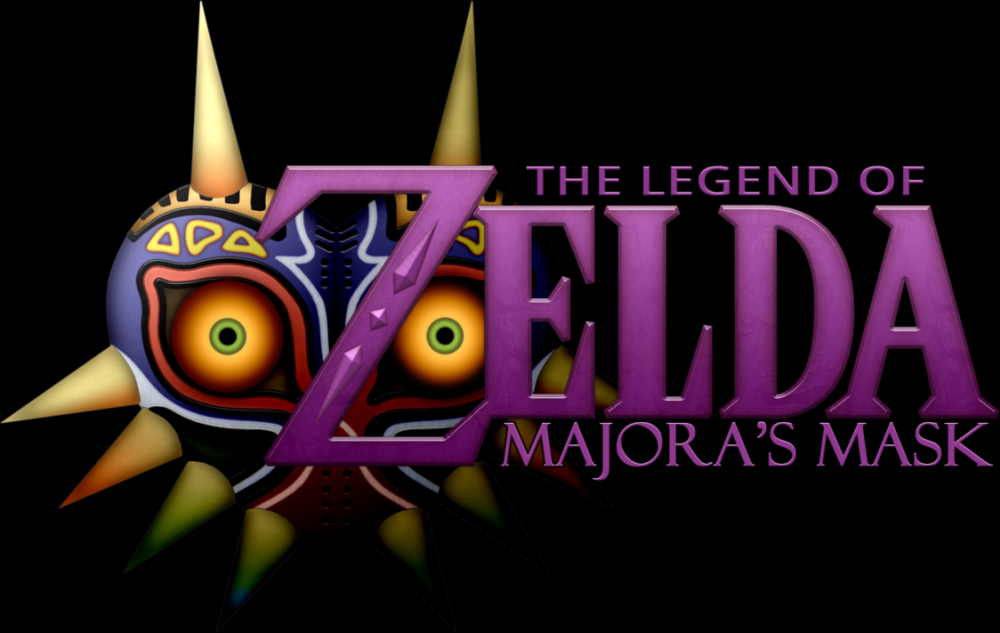