The Guardians of the Galaxy-Ranked

Ranking the Guardians of the Galaxy is tricky business.There have been three distinct eras of the team, and through different media, the divisions have sort of bled together. The...
by Jake Hill May 3, 2017 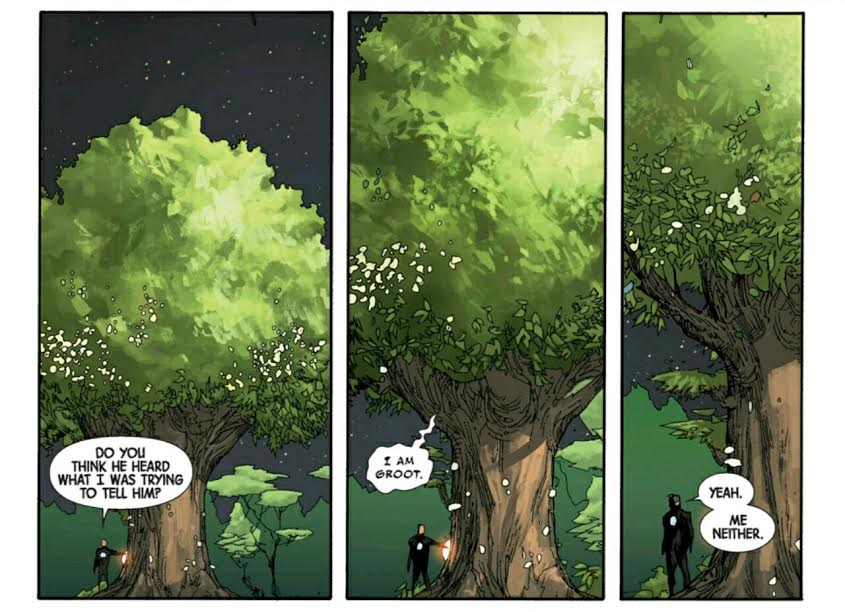 Ranking the Guardians of the Galaxy is tricky business.There have been three distinct eras of the team, and through different media, the divisions have sort of bled together. The original Guardians were a team of superheroes protecting the planet in the 31st century on Earth-691. The more familiar team debuted in the “Annihilation: Conquest: Star-Lord” miniseries by Keith Giffen and Timothy Green in 2007, then continued on in “Guardians of the Galaxy” by Dan Abnett and Andy Lanning and a rotating art team that included Paul Pelletier and Brad Walker. The movie was loosely based on this version of the team and Brian Michael Bendis’s 2013 series added familiar superheroes like Iron Man, Kitty Pryde, and Captain Marvel to the roster.

We’re mostly going to ignore the first and third versions of the team in this ranking, focusing instead on the 2007 team and some of the additions from the movie. Characters are looked at through a similar lens as my Avengers breakdown. Higher points are awarded to powerful characters, and to characters who are easy to get along with and team players. If a character has headlined their own great series or storyline, that’s worth a ton of points.

So without further ado, let’s look at the coolest, weirdest, and most badass heroes and renegades to call themselves Guardians of the Galaxy. 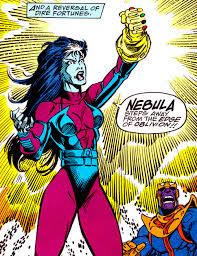 Let’s get some things straight about Nebula. In the comics (and before the first Guardians movie came out), her most significant appearance was in “Infinity Gauntlet” in 1991. Outside of that, she was a very rarely used comic book character, and had little to no association with the Guardians, and was not considered Gamora’s sister. The movie gave her a cooler look, but is mainly remembered for the great performance by Karen Gillan. More recently the comics have taken some cues from the movies, but a real Guardian Nebula ain’t- at least not yet. 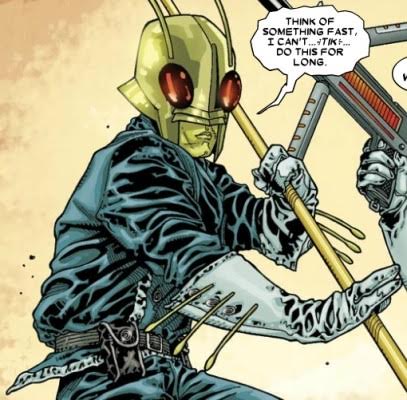 Bug is an oddity in a number of ways. On the original team founded by Star-Lord, the Loverbug first appeared with the Micronauts in 1979. He’s charming and agile, but next to some of the team’s heavier hitters and more memorable personalities, the Kaliklak Warrior/Acrobat doesn’t leave that lasting an impression. 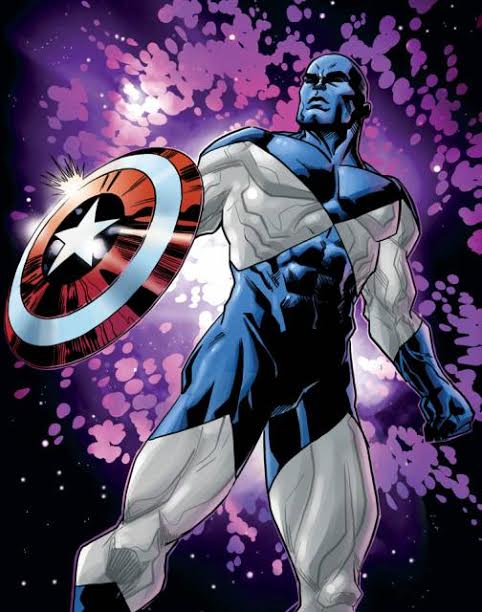 Well, he’s got Captain America’s shield, he’s been a member of two Guardians teams in two different centuries, and through the magic of time travel, Major Victory is also Vance Astro a.k.a. Justice of the Avengers and the New Warriors. You think with all of that going for him, he’d manage to stand out, but Major Victory constantly gets upstaged by the likes of Drax and Rocket.

This is a tough one for me, because when she was Quasar, Phyla was the Guardians, their heart and soul, and one of the most powerful members. Then she sold her soul to revive her lover Moondragon, and transformed into Martyr. Phyla was already a prickly customer, but as Martyr she was downright unlikable. She screamed her way into a number of avoidable conflicts until she was killed again with her own sword. A really sad ending for one of the founding members of the Guardians and one of the bravest veterans of the Annihilation Wars. 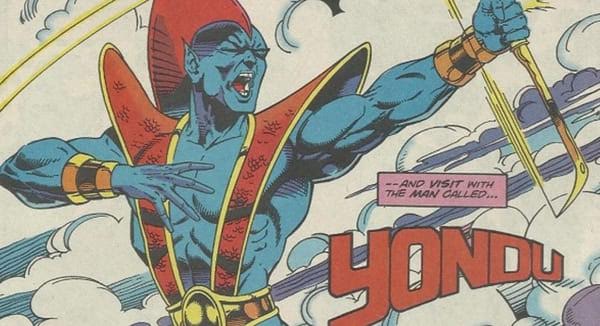 Actually only a member of the 31st century Guardians, Yondu Udonta was made memorable in the Guardians movie by actor Michael Rooker. In the comics, he’s a dude from Alpha Centauri with a bow, not a whistling pirate maniac. Still, with his popularity in the movies, and the repeated appearances of the archers of Alpha Centauri, it’s only a matter of time before Yondu’s similarly named ancestor joins the Guardians proper. 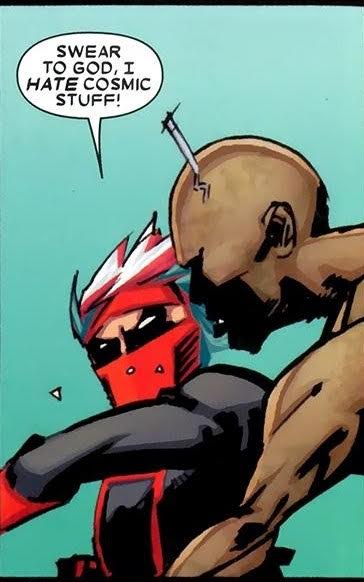 He hates cosmic stuff. He just hates it. Jack Flag was paralyzed by Bullseye right after Civil War and then thrown into Mr. Fantastic’s Negative Zone prison. When Star-Lord, running from a horde of besieging aliens stumbled his way into the prison, he and Jack became quick friends. Using advanced alien technology, Star-Lord and Rocket healed Jack’s spine and gave him a spot on the team. Although slightly less powerful than Captain America and totally out of his depth in space, Jack Flag held his own for years, and brought a hilarious everyman perspective to the sometimes zany Guardians. 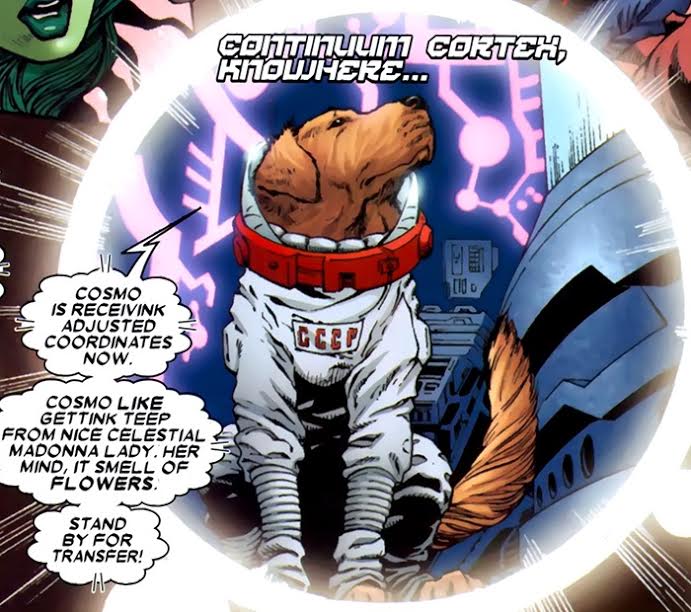 He made a brief cameo post-credits in the first Guardians movie, because Cosmo is one of their fiercest allies. It’s not entirely clear how a lost Soviet space dog became a powerful psychic, or why he telepathically speaks with a thick accent, but Cosmo is lovable, powerful, and competent. At first, Cosmo was the chief of security on Knowhere, the Guardians’s frequent home base. As galactic conflicts escalated, he eventually joined the team proper, supporting them through their darkest moments. He and Rocket never got along though! 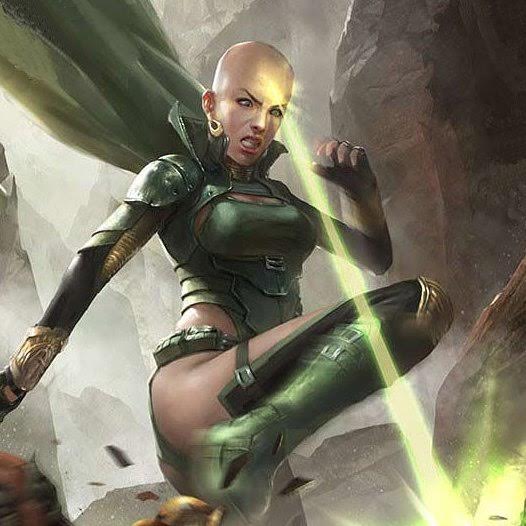 Heather Douglass, also known as Moondragon, is the glue that holds the Guardians together. She’s the daughter of Drax the Destroyer, the lover of Phyla-Vell, and the wartime buddy of Star-Lord and Gamora. She’s also one of the most powerful psychics in the galaxy, and she can turn into a dragon (but only once and she can’t turn back). She’s not an original Guardian because she was dead when they were first founded, but she was revived during the War of Kings, and often acted as a mediator for the sometimes volatile team. 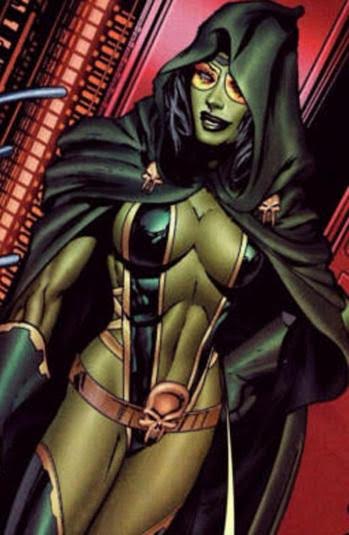 You wouldn’t know it from just watching the movies, but Gamora is actually awesome. Instead of acting as a moralizing conscience and pseudo-mother-figure (while also being a love interest? Movie Gamora is kind of weird) the Gamora in the comics is the deadliest woman in the galaxy and not someone you’d want to cross. I’d compare her to Catwoman, an intergalactic criminal who you hope is on your side, but is always playing her own angle. With her sword, the awesomely named God-Killer, and the skills of an alien cybernetic ninja, Gamora is an unstoppable assassin who keeps her enemies and allies guessing. 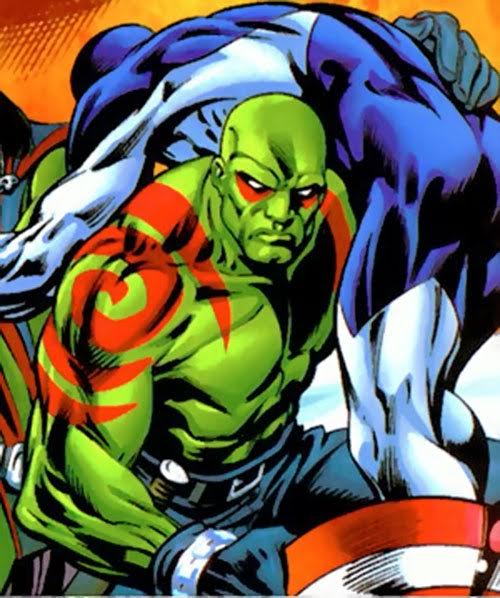 This one is super complicated. In the comics, Drax was a human named Arthur Douglass who was killed by Thanos. Then, Thanos’s dad revived him sculpting a new body of the Earth (like, literally out of dirt) and gave him the power to kill Thanos. Drax is pretty strong, an expert tracker, and one of the galaxy’s best knife fighters, and he will not rest until Thanos has been destroyed. The movie made that all a lot simpler by turning him from a stoic badass to a super-literal alien who doesn’t understand humor. Both versions are cool, and both are essential members of the team. Still, I got a big chip on my shoulder for how all of Drax’s comic characterization vanished to make room for the movie version. 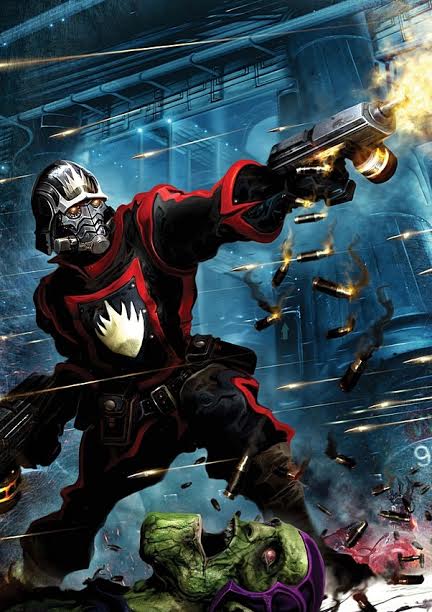 In the comics, Peter Quill was a roguish criminal, but he was a little older and little bit more Han Solo than Tony Stark Jr. Star-Lord has been from one end of the galaxy to the other, and often plays mentor to younger space heroes, becoming a hero of the first Annihilation War, and then a fugitive again in the second. He formed the Guardians with no legitimacy, but his apolitical neutrality means that everyone hates him, but not as much as their actual enemies. He’s another one who was changed to match the movie, putting on his red coat and getting a lot younger. Still, Star-Lord has a lot more personality than a lot of superhero team leaders, and there would be no Guardians without him. I hope he grows up soon. 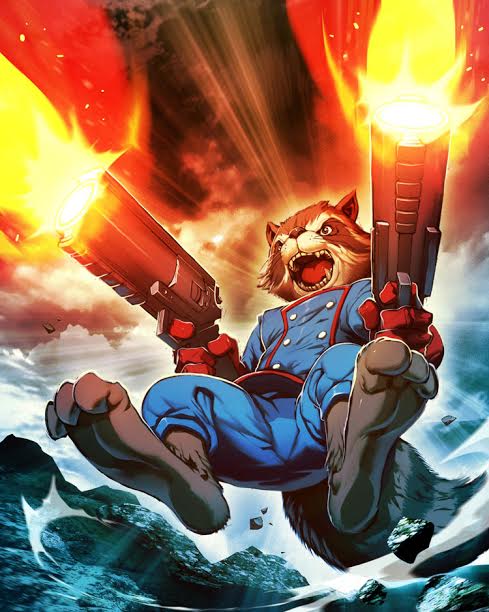 Another victim of becoming the movie version of himself is Rocket Raccoon, who used to be fine with being called a Raccoon until Brian Michael Bendis decided that it would be funny if he yelled about it all the time and had the catchphrase “Blam murdered you!” (ugh). The thing a lot of people forget about Rocket is that he’s more than an angry rodent with a gun- he’s a tactical genius and an explosives expert. Rocket became a mainstay on the team, and eventually the de facto second in command. When writers don’t treat him like a one-note joke, Rocket is one of the greatest superheroes in the Galaxy. 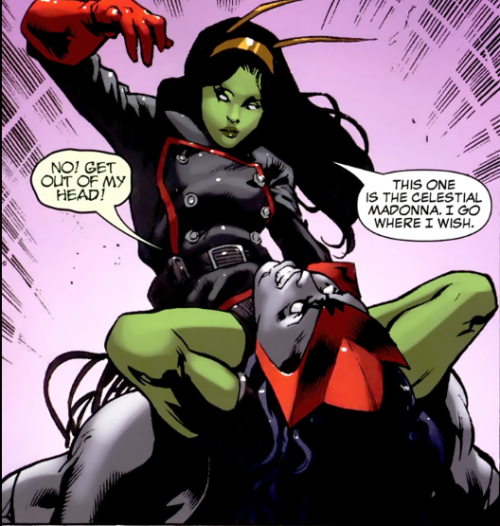 Another complicated one, Mantis was a prisoner in the same jail as Star-Lord during the second Annihilation War, and was his second in command on the proto-team, before they called themselves the Guardians. She then psychically… encouraged the other members to work together and get along, under Star-Lord’s orders. She’s a fun, weird kung fu master, an excellent strategist and an accomplished psychic. Of all the Guardians, she’s the easiest to get along with and one of the most powerful and there would be no team without her. 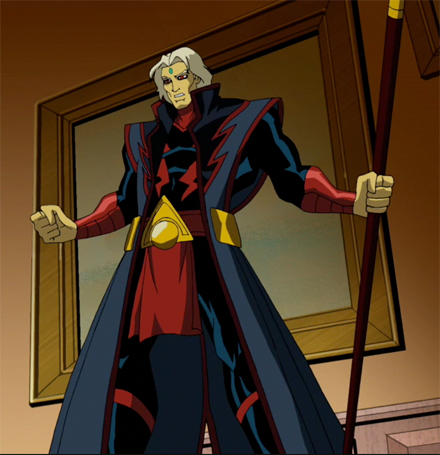 Sometimes just called Him, Adam Warlock is the most powerful Guardian. He’s a master of quantum magic, a wizard and a messiah, and an all around good dude. Gamora has a huge crush on him. With a heart of hold and skin to match, Adam Warlock is probably the thing Thanos fears most. The only thing keeping him from being number one? Well, sometimes his evil half, Adam Magus, takes over and gets up to no good. That’s a pretty significant downside. But as long as he can keep that in check, Adam is the most righteous and powerful Guardian.

Look, you probably already love Groot. But you probably don’t love him enough. First debuting in “Tales to Astonish” #13 in 1960 (that’s right, Groot pre-dates the Avengers), the “Monarch From Planet X” was a one-off monster. Then he ended up in jail with Star-Lord, Mantis, Rocket and the rest during the second Annihilation War. Groot was pompous and could fully speak… until he was shattered, had to regrow and his vocal chords hardened to the point that he could only speak his three-word catch phrase. Ultimately, Groot is kind and immortal and fairly powerful, sometimes matching the likes of Thor and the Hulk in terms of sheer strength. On top of all that? Groot is a scientific genius, able to keep up with the likes of Tony Stark. Groot is lovable, powerful, talented and the greatest Guardian of them all. Oh, and also one day he is destined to replace Yggdrasil as the World Tree. I am Groot indeed!

There you have it, the Guardians of the Galaxy. Was there another hero you wanted to see on the list? Disagree with where someone was ranked? Want to offer me words of encouragement and praise? Let us know in the comments!

Who Is Better: The Guardians of the Galaxy or the Avengers?

The Forty best Star Wars characters you haven’t heard of