We are here to talk about the series Black Jack Ketchum 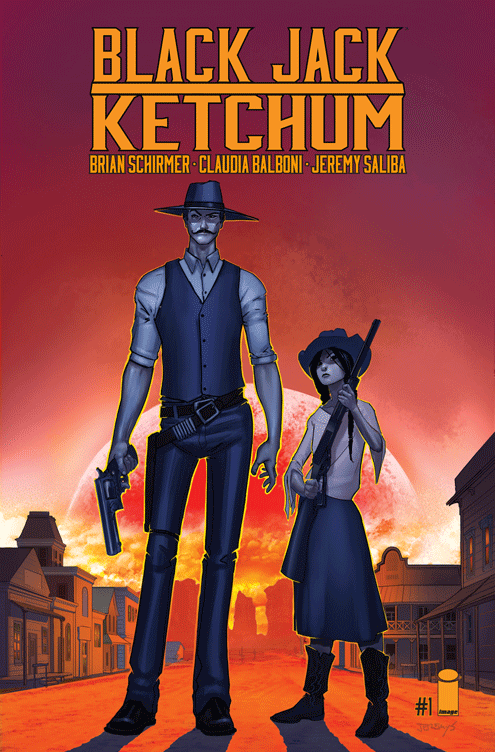 GG:  So let’s talk about Black Jack Ketchum, how would you describe the series?

Brian: We were looking to investigate the idea of identity through the prism of dreams. Or… you know… It’s a surrealist Western that sends a minor historical figure on a journey to clear his name, all the while being pursued by really weird, mashed-up tropes from the genre.

Jeremy:  Brian hit the nail on the head, but I also think it’s a deconstruction of western tropes. We’re all fans of westerns, and we knew there had to be certain elements included that are always in westerns that we all love…but it was Brian who thought about putting those tropes into a blender.

GG:  What was the inspiration behind the story, how did you develop the series? How did this team come together to create Black Jack Ketchum?

Brian:  Inspiration for the story was twofold. I’d grown up knowing about Ketchum – he was a distant relative – so when the opportunity to do a Western presented itself, he seemed a logical protagonist. Also, I’d had a strange dream a few months before there was even a hint I’d be developing this story. It pretty much dropped this world in my lap, a Western landscape that operated on dream logic and that was populated by things like unstoppable, faceless gunslingers and teleportation saloons. So, taking that world and dropping in an obscure outlaw with a reputed history of mental illness felt the perfect fit.
Jeremy:  Jeremy-We came together mainly because Brian and I have been collaborating on comics for 6 or 7 years already, and we had already started the conversation about how this book would play out when he first told me about that crazy dream he had. But as for Claudia, we were lucky enough to “meet” her via email through a mutual acquaintance- although we still haven’t met her face to face! 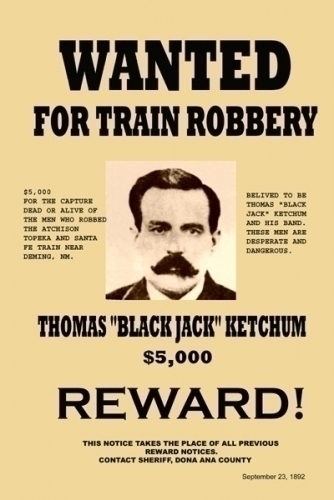 Brian: When I knew I’d be crafting a Western, it was an obvious choice for me to cast Ketchum as a character.  He was a cousin to my great-grandmother, and I’d heard his name bandied about since I was a kid.  I also knew enough about him that intrigued me – possible mental illness, a brief stint in Butch Cassidy’s Hole in the Wall gang, a horrifically botched hanging.  So, I did more research.  The research suggested themes and plot points.  And the story blossomed from there.  However, I made it a point that we would not be slaves to history, that the Black Jack Ketchum in our book takes plenty of liberties.  For one thing, he has conversations with his pistol.  And that’s not a metaphor.

Jeremy: Also we don’t feature the same ending for Ketchum in our story as he found in real life, although it certainly is a motif in the book.

GG: What was the design process like to bring Tom Ketchum, his companion and the western landscapes to life? 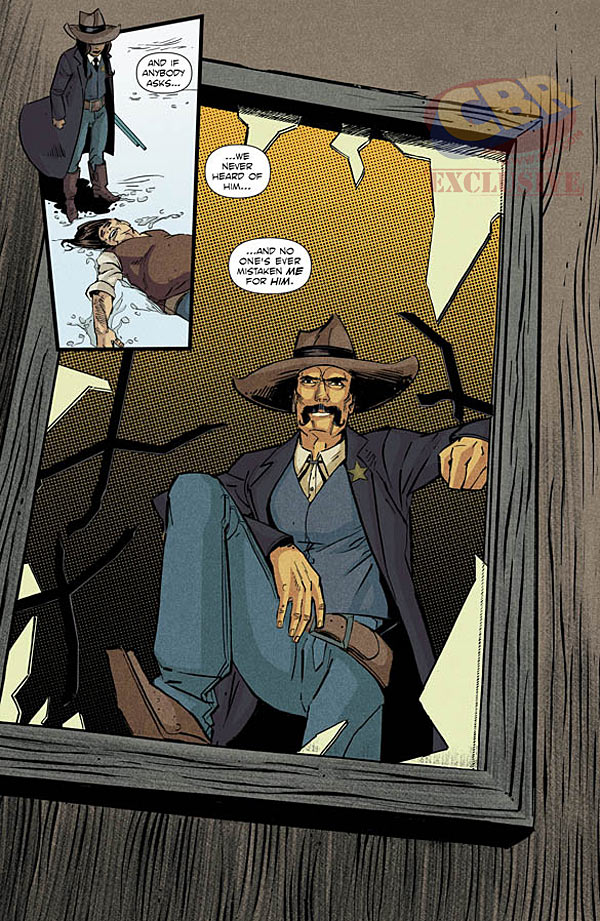 Brian: I’ll defer to Claudia and Jeremy on this. They killed it.

Jeremy:  OH the fun we had! Claudia was the most responsible for the designs of the characters, but we knew going in we’d need a bit more to push the visuals of this book to match the story.  While thumb nailing the covers, I went through several iterations working in line and value, only later I realized color would have a big impact. I had been drawing iconic western thumbnails but they didn’t feel weird enough, and I knew I couldn’t push the designs too much or it wouldn’t feel western enough. So I started using a more fantasy/psychedelic color palette mixed in with classic western drawings, and it really started to click.

GG: What is the Collaborative Process between the team for an Issue of Black Jack Ketchum?

Brian: Free-flowing. I think the script for issue one was complete when we got the go-ahead from Image, but then subsequent scripts were influenced by the art and designs Claudia was cooking up. I could see where she excelled and I’d ask her what she wanted to draw. Where possible, I’d make those wishes happen. Jeremy worked closely with Claudia, and he and I spent a lot of time discussing the covers – which he just knocked outta the park.

Jeremy:  In a word, amazing.  Brian and I had already collaborated quite a bit so we knew each other well, and he’s a very open co-creator.  He wants everyone to have an influence on a book, trusting our talents and tastes and mixing them together to make something that’s unique and our own. And Claudia is probably the most giving and hardworking artist I’ve worked with so far.  She strives to make everything as best as she can, and is always appreciative of any input to try and really perfect any elements of the book. Sometimes working via email can be difficult, but she was amazing, always keeping us in the loop and part of the process.

GG: What one piece of advice would you give comic book writers and artists about pursuing Creator owner books?

Jeremy: Just make comics.  I also teach, and students are often most concerned about how to get a foot in the door. The only way to do that is by sitting down and making comics.  At first no one will be paying you to do it, but if you keep making comics you’ll find that people take notice.  This industry loves people who love making comics.

GG: What does the future hold for Black Jack Ketchum?

Brian: A long shelf-life at your local comic shop or bookstore.

Jeremy:  Hehehe, as Brian said there are no immediate plans for subsequent Black Jack stories, although I loved the character so much I have prodded him on the topic several times. He’s hinted that there could be some stories to tell if there was an interest.

GG: Is there anything else you would like to tell the readers and where readers can find your work and where can people get in touch with you?

Brian: I think we produced one of the stranger, more challenging comics out there in the last year. It might not be for everyone, but it’s definitely found a following, and that’s a great feeling – knowing that your weird and personal and honest little story resonates. Social media-wise, you can find me on Twitter (@BrianSchirmer) and at brianschirmer.com.

Jeremy: I agree that one of our goals here was to make a book that challenged the reader.  At one point Brian and I were talking about that aspect of the book and I said that there are a lot of fans who say they want a book that treats them like an intelligent audience, and I think we did. 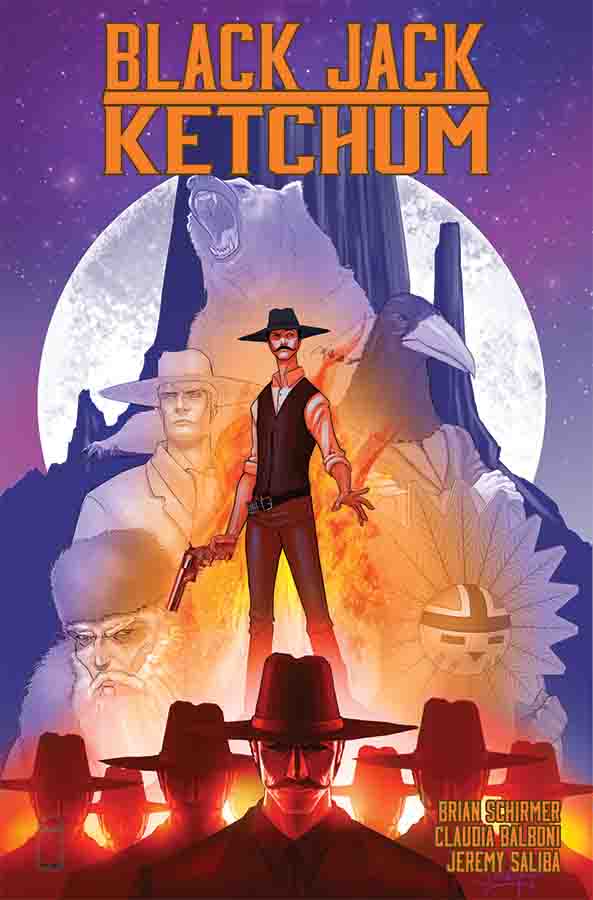