Corporate conspiracies, corruption in healthcare, and bodily autonomy sound like the scrolling headlines on a twenty-four-hour news channel, but they’re also the subjects of Image Comic’s ongoing series, The Beauty, by Jeremy Haun and Jason A. Hurley.

A sexually-transmitted disease aggressively spreads across the world. But this is one disease people actually want to catch: a disease that makes those infected physically beautiful. Two years after the Beauty burst onto the scene, over half of America is infected. Now, it looks like the downside may be far worse than anyone suspected. Detectives Vaughn and Foster find themselves on the front line of the battle against the Beauty, embroiled in a conspiracy they never knew existed.

The official synopsis pitches it as a high-concept plague thriller, and Scott Snyder’s introduction to the paperback volume describes it as “good horror”, comparing it to the better offerings of Stephen King. In reality, The Beauty reads more like action-packed mystery than science fiction horror. Vaughn and Foster are a classic detective duo, wading ever deeper into the deadly weirdness of international intrigue, getting predictably in over their heads, complete with shootouts, secret compounds, and unexpected allies.

What sets The Beauty apart from other conspiracy stories is its premise. A widespread contagion with unknown consequences is a pretty straightforward twist, but the nature of the Beauty virus – the fact that it physically transforms its victims in a supposedly desirable way and that at least some of those victims are willing – ties Haun and Hurley’s story into a larger discourse about the cultural obsession with appearance. While the book doesn’t take on that discussion directly, it paints the implications of sexually transmitted attractiveness with vivid realism, giving The Beauty a texture and context that elevates an interesting premise into a fascinating narrative. 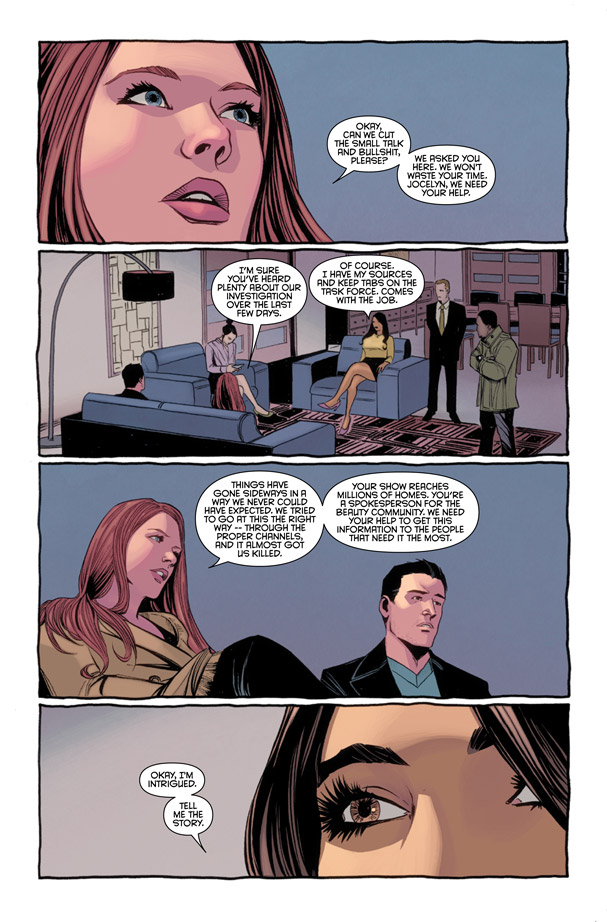 Winner of the 2012 comics Pilot Season, The Beauty began running monthly in August, 2015, and the first six issues are now being collected in a trade paperback volume, due to release on March 16. In connection with the release, co-creators Jeremy Haun and Jason A. Hurley are relaunching their #beautyfree campaign, asking readers to post pictures of themselves with the hashtag #beautyfree to help promote the book. On his website, Haun tells readers, “Do it how you want. Color. Black and white. In the morning when you wake up. Later in the day when you’re feeling human. With makeup or without. It doesn’t really matter. It’s more a statement that we’re all Beauty free and that’s absolutely okay.”

While Haun is an established freelance artist with a long resume of titles, The Beauty is co-creator Hurley’s first major foray into comics publishing, and he delivers a first-class script on all fronts, giving new life to old tropes and pulling the reader along for a hell of a ride. Fans looking for a solid thriller with a thought-provoking premise will be more than satisfied, even if they have to wait until May for the next issue.

The Beauty, vol.1 goes on sale March 16 and is available for preorder on the Image Comics website here. Preorders for issue #7 will start in March.

All images created by Jeremy Haun and owned by Image Comics.