There is no universe that exists in which Jason Takes Manhattan (1989) is considered a good film. Furthermore, anyone who has seen the film and claims it to be a good film obviously needs to rewatch it – nostalgia is a tricky beast, and the only possible way I could imagine someone thinking the film is good for anything but a healthy dose of unintentional humor is by being tricked by distant memories. No, the eighth Friday the 13th film is not good at all, but much like Troll 2, it is immensely entertaining.

While I’m not claiming this film is just as bad as Troll 2, I’m not exactly saying it’s really that far off either. There are so many issues with this film that it is almost as if someone decided to make a parody of the franchise while somehow obtaining the rights to keep the name and tricking everyone into seeing an effective spoof. Keep in mind also that I am a Friday the 13th superfan, and I’m really trying to cut this film some slack. Alas, as it stands, there is nothing that could save this movie’s reputation besides trying to look at it as a comedy. 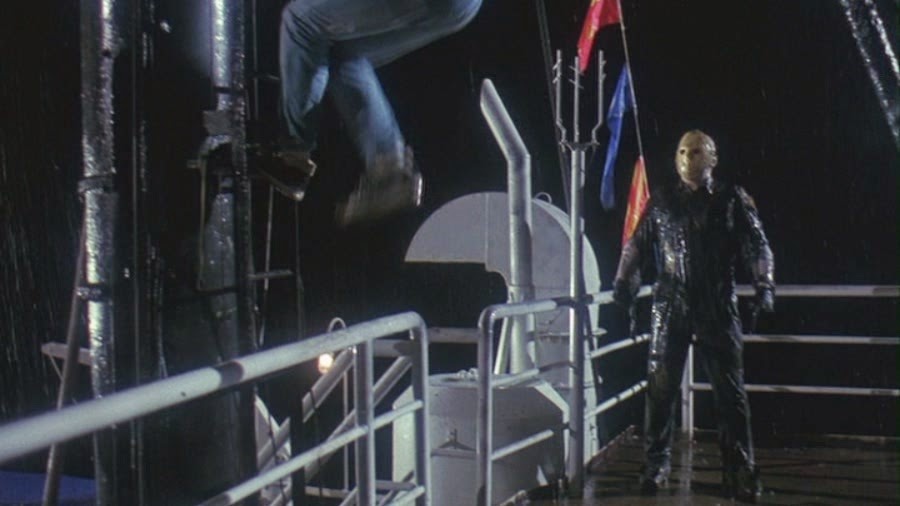 The faultiness of the film is apparent right from the beginning, as the first two kills are completely half-assed and barely inventive. A harpoon? Cool! Let’s see some blood! What? The power of suggestion works just as well? But this is a Jason Voorhees movie! Can’t we see some action? No? Okay, well, at least I tried. This theme will be commonplace throughout the entire 100 minutes of the film. There are some decent kills, but the effects are just not up to par, with most of them looking like no one even attempted to bring any realism or grit to the film. It seems as if Paramount had finally given up on trying to make these beloved films decent even for the hardcore fans.

Another huge gripe with the film from just about everyone that has ever sat through the entire thing is that the film only takes us to Manhattan about an hour into it. The rest is focused on Jason Voorhees stalking teens on a cruise ship. Jason Takes a Boat Trip would have been a much more acceptable and realistic title.

But before going any further, let me stop myself and go over the plot quickly. Jason Voorhees is once again revived by electricity when two teens accidentally drop an anchor on an underwater cable. Jason, as you may remember from The New Blood, has been lying dormant under the waters of Crystal Lake. Shortly after his bubbly awakening, he boards a ship filled with high school graduates who are taking a trip for their graduation all the way to Manhattan; apparently, we now find out eight films in, Crystal Lake is connected to a river that flows to New York City. Jason Kills people, the body count keeps rising, and eventually the remainder of the inhabitants of the ship escape on a little raft, including a teacher (who also happens to be the uncle of the final girl of the film, Suzi) who is, for lack of a better word, one of the biggest dickholes in horror movie history. 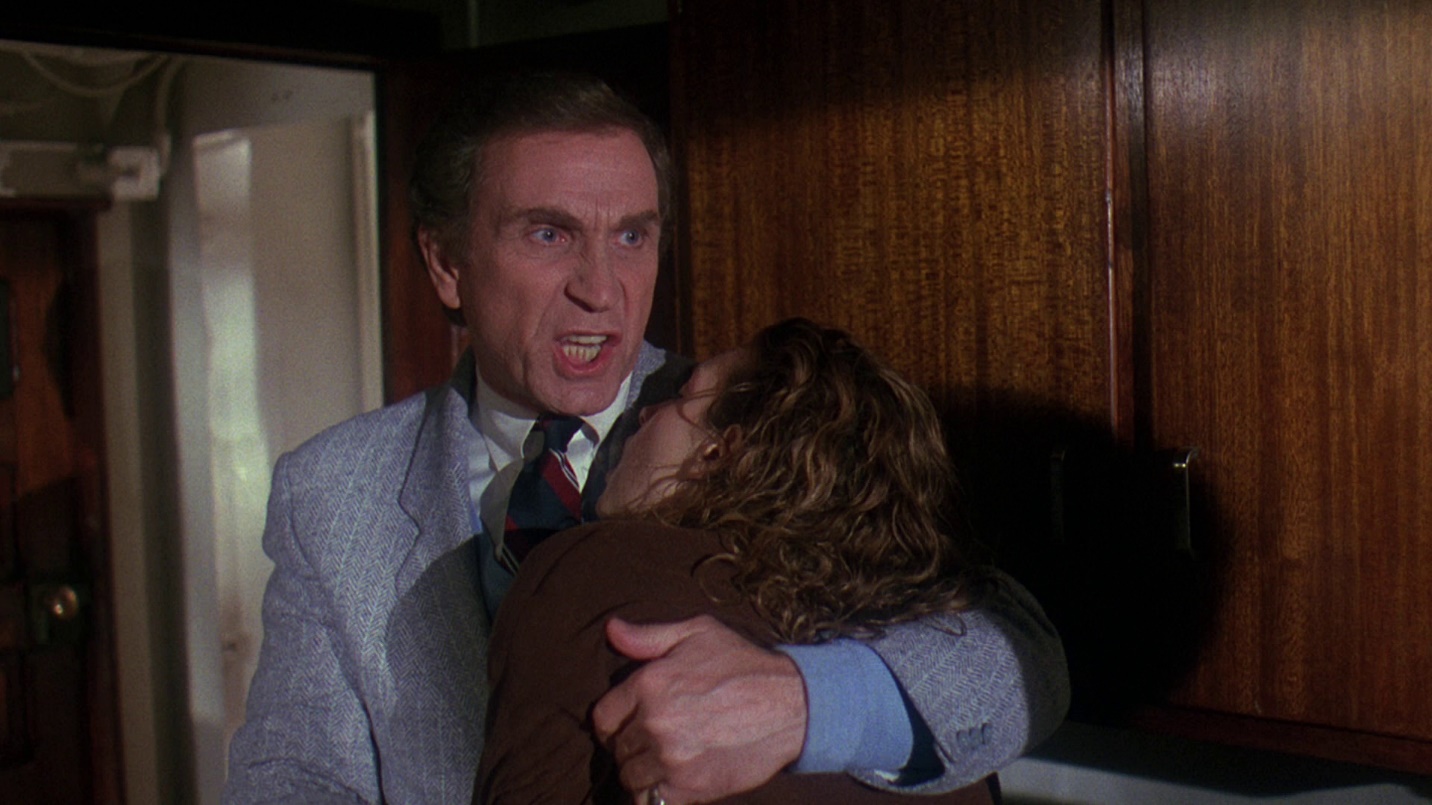 Now, finally, we get to Manhattan. Here’s the issue: why would Jason follow them? And how exactly does he even do it? Do you mean to tell us that he simply swam along and followed the little raft? Why wouldn’t he simply call it a day and go back!?

To be fair, Jason Takes Manhattan does pick up once he arrives in the titular city. The problem now is that instead of a brutal, violent affair, we are left with a ton of goofy sequences (including Jason literally punching someone’s head off, which could have been awesome, but instead it ends up looking as if his head was popped off of a Ken doll) and the killer disobeying the laws of physics, with him being able to pretty much teleport around like Freddy Krueger in his dream world.

There’s only really a couple of scenes where the city is unmistakably New York and those scenes work incredibly well. One in particular, has Jason scaring away a couple of punks who might have been thinking of attacking him; Kane Hodder’s personality really shines through the mask and outfit in situations like this. In another scene, Jason looks up at a billboard advertisement of a hockey mask company in recognition, once again adding a unique personality to the character, reminding the audience that even though Hodder has unfortunately been cast in some of the most ridiculous films of the series, he still is the definitive Jason. 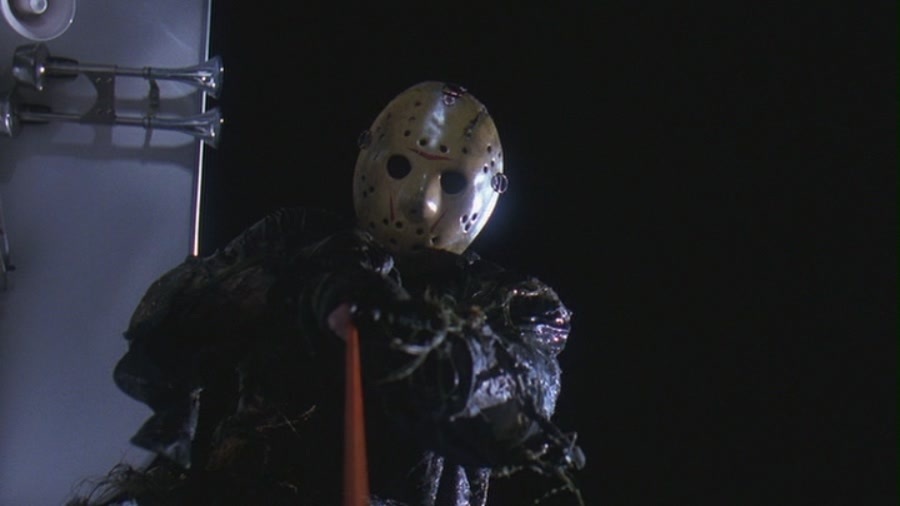 Outside of those scenes, however, most of the New York scenes were filled in alleyways or sewers which could have been any city on the planet – which is partially true. The movie was only partly filmed in New York, with scenes being shot in Canada and California as well. The promise of Jason Voorhees running around a city causing mayhem was more or less empty outside of a select few scenes, making the film wholly disappointing in just about every aspect. The kills are uninspired and come off as funny instead of scary, and the entire plot is so haphazardly put together that it’s not even worth trying to make sense of.

So what went wrong? Why did this film flop so hard when it was set with such a potentially awesome premise?

Writer and director Rob Hedden had originally intended for most of the film to have been set in New York City, staying faithful to its title. We could have seen Jason on the Brooklyn Bridge as well as Madison Square Garden and even the Empire State Building like it was originally written; just thinking about having Jason in these settings gets me more excited that I probably should be. Paramount decided that it would have taken too much of the budget to film all of those extra New York scenes, and so they were cut – a decision that is most definitely the leading cause of failure for the film.

The film, quite obviously, bombed at the box office, and would be the last offering from Paramount in this franchise until the reboot in 2009. From this point on, it will be a dark time in the series for many fans, with this film being followed by two of the most polarizing entries, Jason Goes to Hell and Jason X. It will not be until Freddy vs Jason in 2003 that the series will really be able to find its footing once again for most fans. The franchise was sold to New Line Cinema, which, as you may remember, also owned the rights for A Nightmare on Elm Street. If the film had been a financial success and Paramount kept the rights to the franchise, who knows what would have happened in the coming years.

Because of this, I’d like to think that Jason Takes Manhattan is a blessing in disguise. It paved the way for more interesting things to come in regards to a showdown between two of the baddest villains in horror, and is more than worth a watch if you are looking to laugh your ass off at a ridiculous film that barely has anything to do with its title. Go ahead and watch it; just be sure that you know what you’re getting yourself into.

Kane Hodder will return once again as Jason Voorhees in the next installment, Jason Goes to Hell! Stay tuned to The Geeked Gods to see how the next one compares to this hilarious entry on Monday, June 27th – it’s much better, trust me.

Reason’s to be Excited for DC’s Rebirth