The absence of Jason in Friday the 13th Part V: A New Beginning was a purposeful move in order to start a new set of films in which Tommy Jarvis would take the role of the villain; however, after the poor fan reaction that the fifth entry received, the idea was scrapped. One thing was clear: the world needed more Jason Voorhees.

To call Jason Lives! a return to form for the franchise would be selling the sixth entry short. Instead, it’d be more fitting to say that the movie completely reinvigorated the series and gave it a loophole in which Jason Voorhees could essentially live forever: now, instead of just being a deranged madman in the woods, he’s a supernatural force; a real-life campfire tale. There’d be no stopping him now…and that’s exactly what fans wanted.

It opens up with an older Tommy Jarvis (now played by Thom Matthews) is on his way to the burial site of Jason with his friend, Allen Hawes (Ron Palillo) to dig up the killer’s body and burn it in attempt to end Tommy’s hallucinations and rid the world of Jason for good. Instead, Jason is revived by a struck of lightning after Tommy sends a metal pole through his chest, causing him to rise from his coffin and rip out Allen’s heart. It is at this very moment that the film takes its identity; it’s uncompromisingly fun while retaining a sense of grim, completely over-the-top violence. The rest of the film follows Jason as he returns to Camp Crystal Lake (now called Camp Forest Green) and takes revenge on the world of the living. 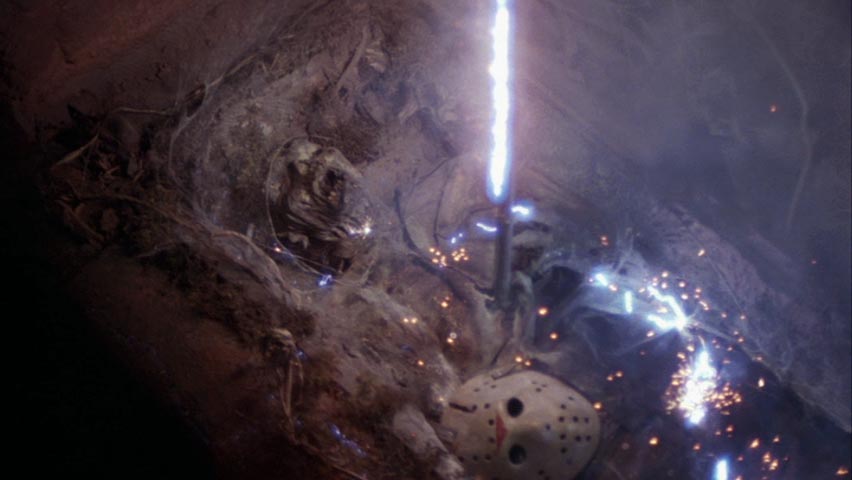 This new and undead form of Jason opens up a whole new realm of possibility for the character; normal physical laws no longer apply to him (as if they ever really did in the first place), and he is, essentially, unstoppable. He’s bigger and badder than ever with a more brutal bloodlust than ever before – made all the scarier because of the fact that he is now a zombie. Stopping this undead maniac is not so much of an option anymore, and instead, the best a character can hope to do is survive him and incapacitate him indefinitely.

Writer/director Tom McLoughlin could have easily created a bleak and hopeless film with this theme and truly amped up the terror, but instead decided to simply have fun with it. By now, it’s apparent that these movies work best as throwbacks to the Universal Horror Monster Films as opposed to more serious horror films such as Tobe Hooper’s The Texas Chain Saw Massacre (1974), and McLoughlin must have been completely aware of this; he must have also been completely aware that trying to take Jason too seriously will simply result in something unintentionally funny. Here, there are numerous funny scenes, but they’re all intentional, and even a bit meta.

The best example of this comes very early on in the film when Jason encounters a young couple driving on the road. On first glance of our beloved villain, Lizabeth, one of the passengers, states that she’s “seen enough horror movies to know any weirdo wearing a mask is never friendly.” She is correct, and just a few moments later, is murdered in a puddle by this weirdo wearing a mask. Another scene follows a group of office workers having a friendly paintball match in the woods; when two of them are shot with a paintball gun, the rules dictate that they must each wear a bandana that has the word “dead” written on it. Predictably, they soon become “dead” themselves, with Jason literally turning them into pieces of scattered, ripped meat.

But don’t be fooled by the humor and the playful tone of the film; it’s equally dark and full of tension. Though it’s fun as all hell, the blood and guts run freely in this film, with tons of clever and disgusting murders. One scene, in particular, stands out, as a police officer discovers a cabin at the camp with the walls dripping with blood that’s been sprayed around the room like a firehose. There aren’t even any body parts left to show in the room; only the reminder that something terrible has happened here. People are being mangled left and right; skulls are crushed, limbs are lopped, and bodies bend in ways that they’re never supposed to go.

McLoughlin’s directing in Part VI is absolutely top-notch. While most of the movies in this franchise find their merits with sheer fun factor alone, the sixth installment stands above the rest in terms of even technical aspects alone. There is a lot of attention to detail and the lines are delivered effectively. Thom Matthews, who had appeared in Return of the Living Dead a year earlier gives a great performance as Tommy Jarvis, rivaling Corey Feldman’s version of the character. C.J. Graham plays an excellent and menacing Jason, with perfect mannerisms and tons of charisma despite the fact that he’s in full makeup and mask. Put simply, it’s probably the most well-done of any film in the franchise thus far. 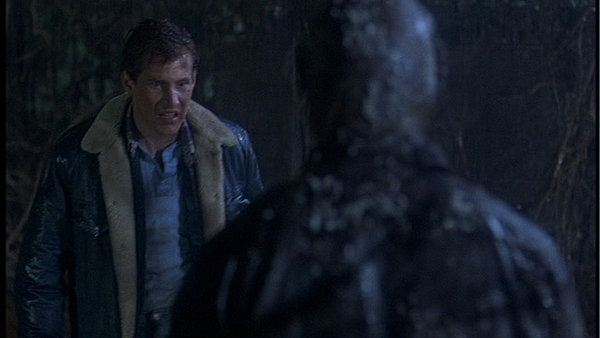 While I’ve long held the belief that the second film is the best in the franchise, I’ve had to seriously reconsider that statement upon viewing all six films so far through a critical lens. In a funny turn of events, this Friday happened to fall on the thirteenth of May, and a double feature of the first two films was shown at a local theater. The next film I watched, before writing this entry to The Franchise Files, was Jason Lives!. Out of all three, the sixth was hands down the most enjoyable one in terms of not only scares but overall aesthetic. It’s a sobering thought, but I may have to reconsider how I rank the entire franchise with this recent revelation.

I’m not alone in this sentiment either, and in 1986, critics actually gave kind words to this film and spoke favorably of it, which had not really happened in the entirety of the franchise’s life. It was a commercial success, and the new supernatural aspect of the series ensured that Jason would definitely return in a new film – and if you weren’t sure of that already just by reputation, the twitching eye of Jason’s submerged body helps to make sure that there are no misconceptions.

Tune in to TheGeekedGods.com on May 30th to find out whether or not the next film can keep up the momentum started by Jason Lives! and finally see the introduction of fan-favorite Kane Hodder which I mistakenly promised you for part 6! OOPS! For real, this time!