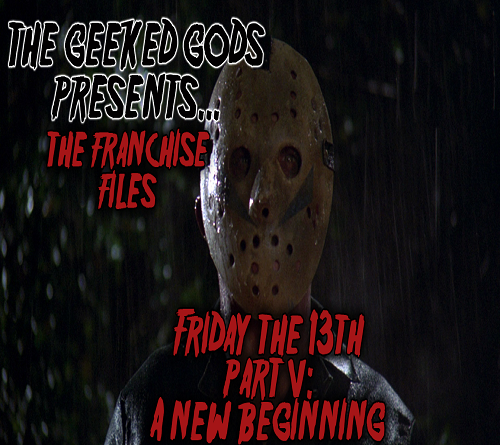 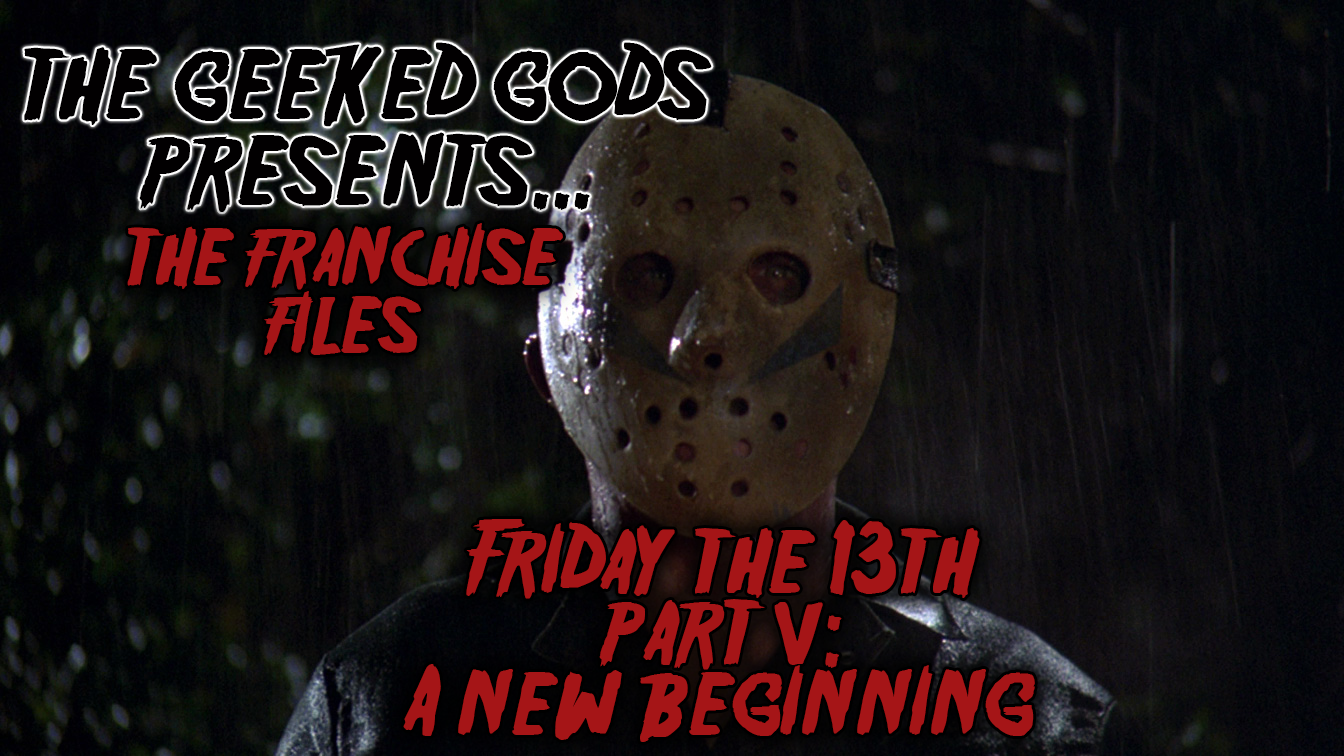 In 1984, Jason Voorhees was dead. Tommy Jarvis (Corey Feldman) made sure of that in The Final Chapter as he hacked away at the deranged psychopath. In 1985, a new Friday the 13th film would be released – and despite the release of a new film, Jason would stay dead. For the time being, anyway.

Directed by Danny Steinmann, Friday the 13th Part V: A New Beginning attempts to continue on the franchise even after the death of Jason, carrying on the story of Tommy Jarvis (played by John Shepherd) as he seeks mental treatment following the traumatic events of the fourth film in a group home. At Pinehurst Halfway House in Pennsylvania, we are greeted by a very interesting mix of characters: nymphomaniacs, punks, goths, and a lovable little kid named Reggie “The Reckless” Winter (Shavar Ross). Vic, a punk with a seriously short temper, puts an ax through innocent Joey after Joey angers the punk by offering to help chop firewood (did I mention Vic has a short temper?). Two paramedics arrive on the scene to take Joey’s body away, named Roy (Dick Wieand), who is visibly upset by the death, and Duke, who considers it just another day on the job. Later that night, the murders start – but who’s behind them?

It can’t be Jason, can it? No, it can’t; he’s dead, as pointed out by Mayor Cobb. So who, then, is committing these murders, if not Jason?

What follows in A New Beginning is part murder mystery and part psychological horror, though it’s not fleshed out that well. Tommy Jarvis, understandably, returns with a number of serious issues, one being paranoia and an irrational fear that Jason is ever present, following him around. Despite the film’s flaws, the storyline is actually a completely reasonable way of continuing the franchise after the death of Jason. Steinmann’s script about a copycat killer is a lot more feasible than Jason somehow escaping death once again after being so badly beaten by Tommy Jarvis, and the fact that little Tommy grew up to be something of a mental patient is much more realistic than him emerging as a valiant hero. Tommy is pretty messed up here, and much of the rest of the cast is too, adding in a pair of deranged, hillbilly neighbors that help to make the film all the more disturbing.

Which is something that the film does well, actually; all things considered, at this point, it’s definitely the most disturbing Friday the 13th film yet. There’s an abundance of sex, foul language, violence, and even drug use – when you top all of that off with a bunch of mental patients being butchered, you’re in for a pretty sadistic ride. The series has always had a penchant for killing off everyone without holding back – even the paraplegic, as seen in Part 2 – so giving a copycat Jason a fresh crop of people with mental disabilities and drug users to kill makes perfect sense for the series. Part V aims to shock you and push the violent envelope further than it’s ever been pushed in the series before, and it succeeds. The kills here are done pretty well, despite the absence of Tom Savini once again, including a porta-potty death in which Reckless’ older brother, “Demon”, is killed. Demon, played by Miguel A. Núñez, Jr., would go on to play an almost-identical character named “Spider” next year in the cult classic Return of the Living Dead. The similarities end there, though, as Spider does not die while taking a dump, which is pretty much the entire purpose for Demon’s character. 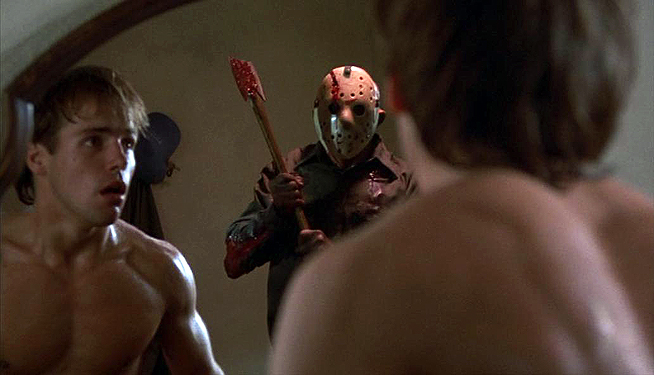 Much like Corey Feldman in the previous installment, Shavar Ross may just be the best actor in A New Beginning, despite his young age. Reggie “The Reckless” is a pretty kickass kid with a great amount of personality that really shines onscreen. The decision to include another child as one of the main protagonists was a great choice, giving an adventurous flavor to the film. That red jumpsuit as well is so unbearably ‘80s that it hurts, in the best of ways. Besides him, however, the rest of the cast gets the job done; there are no Crispin Glovers or Kevin Bacons, but it’s still nothing as horrendous as the cast of Part III.

While I commend the story for attempting to continue on in a mostly reasonable manner, the film’s story is not without fault, as the overall twist in the end is a bit far-fetched… especially when coupled with the fact that this all just happened to occur at the same halfway house that Tommy Jarvis is attending, states away from where the previous Voorhees murders have occurred. But that’s part of the fun – it just wouldn’t be a Friday the 13th film without some unintentional camp (pun intended?). Yeah, it’s pretty silly when the facts of the story are all put into perspective, but it’s extremely interesting to see how the franchise attempted to keep momentum even without Jason actually being in the film.

So just who is dressed up like Jason here, exactly? 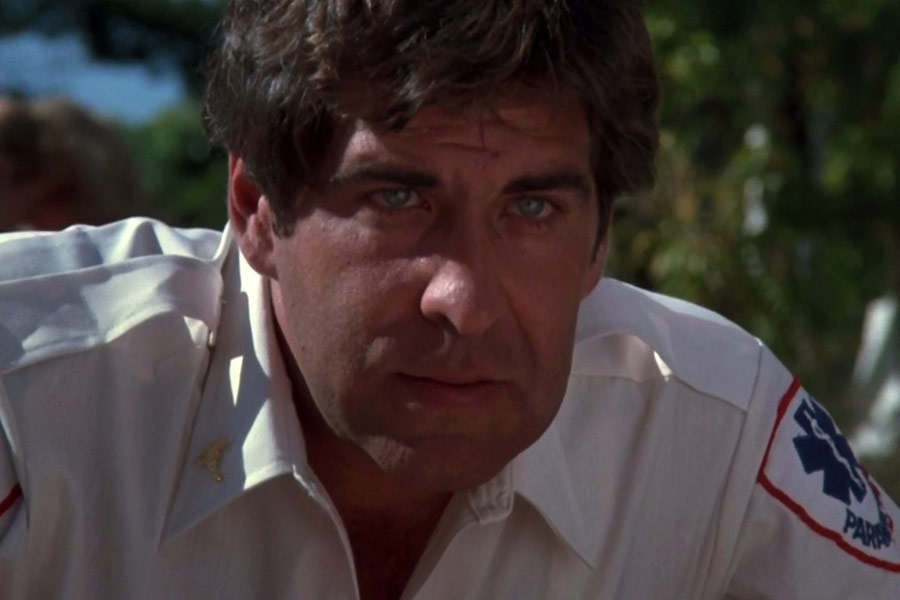 Yes, Roy Burns, the paramedic! And why? Well, duh! Because Joey, the innocent little candy bar-loving guy that was killed by Vic in the beginning of the film was Roy’s son! And even though Roy put him up for adoption and abandoned him, he is still able to watch over him because murders must be happening at the halfway house so often that Roy is just always there to catch a fleeting glimpse of his son without ever speaking to him…until it’s too late! So Roy takes revenge and kills everyone while disguising himself as Jason, starting the night of his son’s death, which means he decided this and started acting upon it with full costume immediately! It’s ridiculous, sure, but hey – A for effort.

A New Beginning, in my opinion, is a good film, though it pales in comparison to the previous effort. And although I’m also a fan of the franchise attempting to continue on without Jason, many others were and still are not, as there are rabid Friday the 13th fans that have almost completely disowned the film, proving that the hockey mask is not something that can just be picked up and worn by anybody. For some, it’s gotta be Jason or no one at all. Box office numbers proved this to be true, as the film would make about $10,000,000 less than The Final Chapter. This would spell doom for a planned trilogy of films in which the franchise could continue without bringing Jason back, and instead, prompted filmmakers to literally pull Jason Voorhees out of the grave.

Tune in on Monday, May 16th to find out how Jason Voorhees makes his gory return to the big screen in Friday the 13th Part VI: Jason Lives! Tommy Jarvis will come back as well, making the ending of this film nearly completely irrelevant! Kane Hodder will play Jason! Fans will be happy again! Hell yeah!