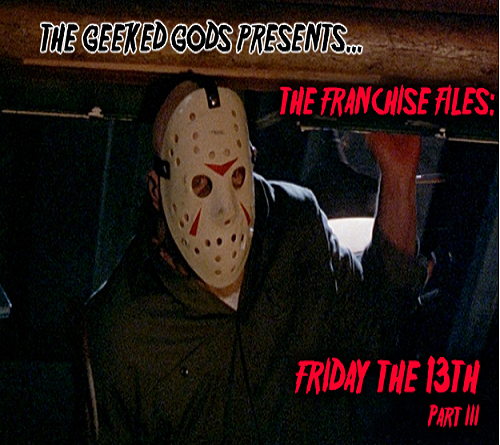 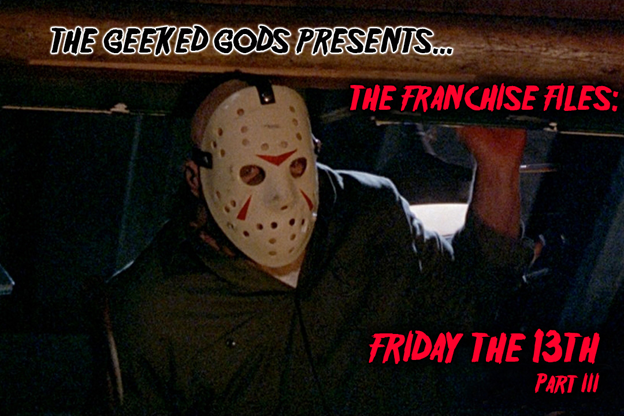 By 1982, fans (and detractors) were already wising up to the formula of the Friday the 13th films. In an attempt to keep things fresh, Paramount studios made the only rational decision available to help the film stand on its own; new story line? Forget that! I’m talking 3-D, baby, 3-D!

Friday the 13th Part III starts off with an immediate recap of the end of the previous movie, changing it slightly so that the viewer can see Jason crawling off in his hut with the machete in his shoulder. A day later (making this film actually take place on Saturday the 14th), Chris Higgins (played by Dana Kimmell) makes her way with her friends to her family’s cabin near Crystal Lake, “Higgin’s Haven.” Along with her is jokester Shelley (Larry Zerner), who is hoping to hit things off with Chris’ friend Vera (Claire Sanchez), pregnant couple Debbie and Andy, and stoner couple Chuck and Chili. They will also be meeting Chris’ boyfriend, Rick, at the cabin. 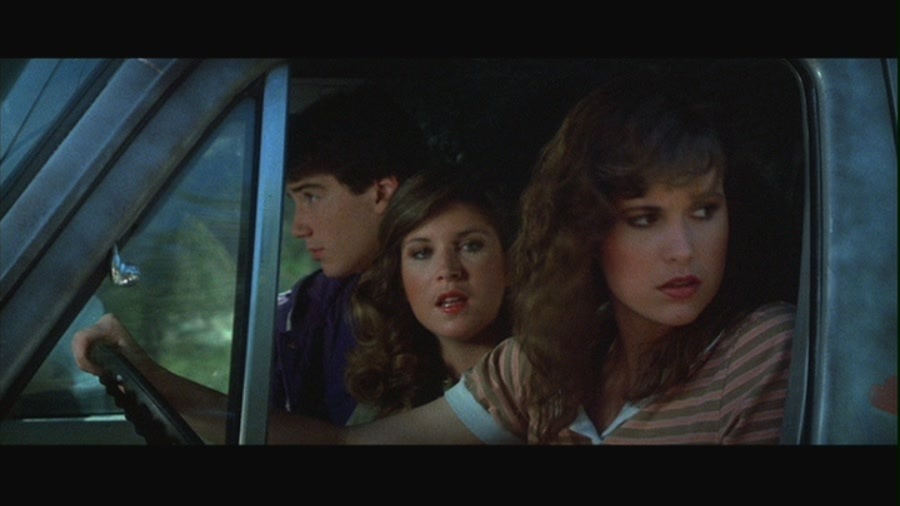 Shelley and Vera drive to a convenience store after they arrive at Higgin’s Haven and run into the three most unbelievable and outrageously funny gang members ever, Fox, Loco, and Ali. They become angered once Shelley refuses to let himself be bullied by them, and in turn, they make their way to Higgin’s Haven to pay Shelley back by burning down the barn on the property. However, they find a hideously deformed man, and they all quickly meet their respective fates by Jason Voorhees, this time played by Richard Brooker. For the rest of the campers, it’s all downhill from here, as Jason has probably the most exciting Saturday he’s ever had…in 3-D!

While Friday the 13th Part III is definitely fun, it’s a lot goofier than the first two, and for the most part it’s not intentional. The music especially adds to the silliness; it’s got a definite Halloween-Disco vibe, and it doesn’t really work in bringing any tension to the film. It’s a bit reminiscent of the Ghostbusters theme and feels severely out of place – something that works well in making a fun movie, but heavily detracts from creating anything truly scary.

The silliness is continued in the three gang members, who are some of the funniest “villains” ever to be put to screen. Their names alone are ludicrous, and their outfits, hilarious tough-guy mannerisms, and overall demeanor just do not work. The scene in which Fox swings from a rope at the top of the barn, screaming “woo-hoo!” in particular completely kills any and all credibility these characters may have had. They’re not likable, they’re not interesting, and they add nothing to the film besides making a very colorful cast. 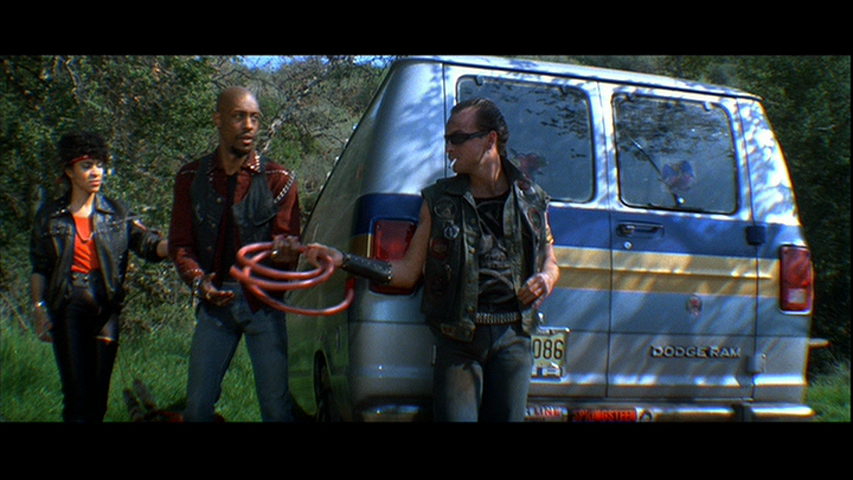 Speaking of the cast, it’s simply not as strong as what we’ve seen so far in the first two. The characters do not seem to have any common ground between each other, and although we know they are friends because they verbally confirm it, there is little else throughout the film that makes the viewer believe these people are anything more than actors reading from a very simplistic script. The Final Girl of the movie in particular, Chris, is excruciating; in a scene in which she delivers a very strange account of how she encountered Jason in the woods some time ago, her exaggerated dialogue and forced trauma make her one of the least believable final girls in the series. She lacks the innocence of Adrienne King’s character from the first and the fire of Amy Steel in the second. Simply put, these characters are just not good...excluding Chuck and Chili.

The two of them share the only believable relationship in the movie, and they share some intentionally funny lines. While they seem completely out of place in this group of friends, they have the most personality out of anyone besides Shelley, the pitiful wise guy. Truth be told, you can’t help but feel bad for the guy, but most of the pranks that he pulls are just so unbelievable and silly that you don’t even care about what happens. Sorry, Shelley. I wanted to like you, I really did, but I ended up more or less indifferent to how your fate plays out. The pregnancy factor in this movie is hilarious due to the fact that, much like the crippled jock in Part 2 is put in the film only to be distasteful…and therein lies the charm of this series. It’s messed up, sure, but it’s so messed up that it borders on hilarity.

While many hold the belief that you don’t necessarily need good actors in a slasher film, that’s only partly true; sure, it’s not necessary, being that most of them are going to be killed off regardless of their acting skills, but they need to have something unique about their personalities that makes you care. Somewhere between the 3-D, the gore effects, and the horrible wardrobe choices, that factor gets seriously lost in the mix. Steve Miner, who sits in the director’s chair once again for Part III, was most likely focusing on other things than putting together a superb cast, and it’s completely understandable.

For one thing, it’s pretty clear that the man was trying to shake things up a bit and have a little fun with the project. There’s a scene in which Debbie holds a copy of Fangoria and opens up to a feature on Tom Savini and his special effects work, only to look up and see the father of her never-to-be-born child hanging above her, mangled and chopped into pieces. It’s a scene that works wonderfully; at first, the viewer smiles at the little homage to Savini, but that smile quickly turns into shock as a split-second image is shown of Andy, broken and bleeding beyond repair, before the scene cuts away. It doesn’t give you enough time to really process what you’re seeing, and instead, you are left with a very disturbed feeling in your stomach that works perfectly. It’s absolutely the best scene in the movie.

The other kills are decent, but that’s probably the best out of the bunch; the movie was clearly put together to see what the crew could do with the 3-D technology. It was the first that Paramount had done since filming Mario Camerini’s Ulysses in 1954. There are numerous shots where the scene was geared towards having something pop out at you, and they’re not all necessary, including a yo-yo, some popcorn, and the end of a garden tool. For those who own the VHS copy of the film (like me), it’s actually really fun to go back and watch it in 2-D format while trying to guess which parts were supposed to be in 3-D.

What’s really important about this film is the mask. The hockey mask! The most important piece to Jason’s longevity and pop culture status is, without a doubt, the hockey mask. There’s just something about it that works; it was the perfect fit for his character, and it’s been featured in every single movie since with a few tweaks here and there. The mask was provided by Martin Jay Sadoff, the 3-D effects supervisor. Miner called for a lighting check for some 3-D tests, and instead of applying the heavy amount of makeup it took to Jason’s natural face in the film, Sadoff, an avid hockey fan, pulled a hockey mask out of his gear bag, which he carried around with him at all times. The rest, as they say, is history.

…That is, unless you ask director of the original Friday the 13th, Sean S. Cunningham. His story on the origin of the mask goes a little bit differently:

“I think Steve had done a whole bunch of hockey documentaries, when he was learning the editing craft, and I think that just out of that, he just said, ‘Let’s just try this,’ and that was the choice for ‘Friday 3’, and it just stuck.”

However, there is one discrepancy: Sean S. Cunningham was not involved with Part III. While I wouldn’t go so far as to say that he’s lying, because he’s not saying anything inflammatory, it simply doesn’t seem that he is as reliable a source as someone such as Larry Zerner (who is quoted in the above link to the ESPN article) who acted in the movie. If it was in fact Sadoff who provided the mask, that would be more than enough justification for having the movie shot in 3-D; if he wasn’t there to work on the effects, would the mask ever have been used? That’s a reality I wouldn’t want to think about.

Despite the silliness of the movie, it’s an incredibly important step forward for the franchise. Richard Brooker’s Jason is bigger and more menacing than ever, and shows a clear evolution of the character which will be furthered in the next film. In Part III, Jason’s unmasked face is that of a deformed, ugly child in a hulk’s body. It’s definitely scary, but nowhere near as iconic as the hockey mask, which would be altered slightly throughout the rest of the series.

Friday the 13th Part III would go on to make $36,200,000 from a budget of $4,000,000, making it once again a commercial success, despite critic’s negative opinions. And while those most certainly are very large numbers, the film was only the second most successful horror flick of 1982, as Steven Spielberg’s Poltergeist would take the number one spot at a whopping $76,600,000. But hey, that’s a fair contest.

While the third installment will mainly be remembered due to the introduction of Jason’s now-legendary look, the next in the franchise will be a big step up for the series. In the fourth film, we’ll be getting a classic ‘80s child star, as well as the return of one of the biggest reasons for the first film’s success…but you’ll have to wait until Monday, April 18th to find out exactly what I’m talking about.

Stay tuned to TheGeekedGods.com as we continue our body count through ALL of the Friday the 13th films in THE FRANCHISE FILES.

The Geeked Gods NCBD Picks of the Week