The Fly: 1986’s Sci-Fi/Horror Gem   A Bug’s Life was an adorable and funny Pixar movie from 1996. It featured likable characters, cute dialogue, and above all, a truly... 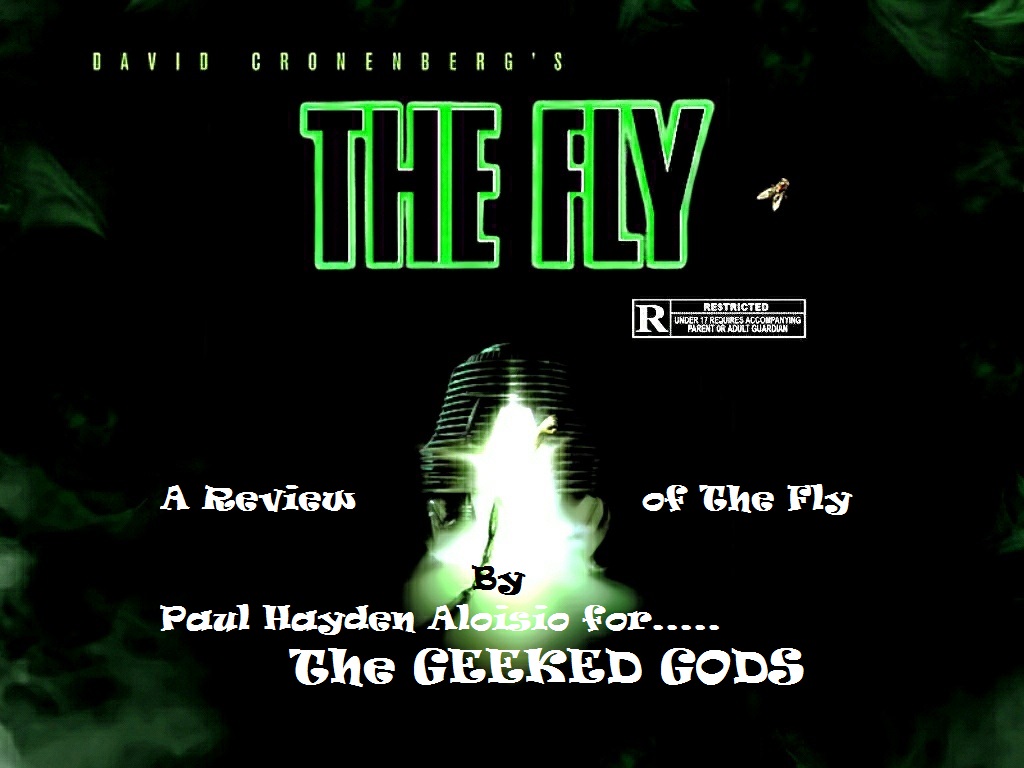 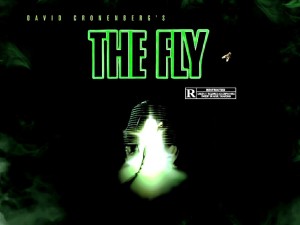 A Bug’s Life was an adorable and funny Pixar movie from 1996. It featured likable characters, cute dialogue, and above all, a truly heartwarming story. This movie is literally nothing like that but I’ve been looking for an excuse to talk about it in an article and just threw it in there. The Fly is about bugs, but a bit different.

Something that I absolutely cannot stand is when people, especially horror or science fiction fans, complain about the lack of originality in movies “these days.” This bothers me so immensely because of reasons such as this film, which I may or may not have referenced when I wrote my article titled In Defense: Remakes and Reboots. I’m not going to rant about my opinion on that any further, but keep in mind that this phenomenal piece of insect-humanoid cinema is, in fact, a classic example of a remake going way above and beyond the original. That statement in itself is a bold one, being that the original 1950’s film starred none other than the master, Vincent Price. 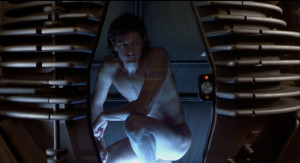 The Fly (1986) stars Jeff Goldblum as Seth Brundle, a scientist who is working in the field of teleportation. His love interest, Veronica Quaife (Geena Davis) accompanies Brundle to his home laboratory one night while he demonstrates his progress and successfully teleports inanimate objects. After a bit of trial-and-error, the scientist tests his machine on every scientist’s forbidden subject in a Sci-Fi movie: himself. This, obviously, is a recipe for a disaster, and when a simple house fly gets mixed into the ingredients, the result is a man who shares the DNA with an insect. Unfortunately, Brundle is no Peter Parker, and instead of fighting crime, the man’s life begins to molt and change…very, very fast. His teeth are now useless, as he begins to vomits an acidic substance onto his food to melt it before consuming and they begin to fall out. His appearance changes drastically, as does his general temperment and just about every other bodily function. Slowly, the man becomes the fly. It’s a horrifying yet ingenious display to behold.

The film was directed by David Cronenberg, infamous for films which more often than not include the theme of “body horror,” which is exactly what it sounds like. Horrible things happening to your body. Naturally, the classic Sci-Fi movie was a great springboard for Cronenberg to take something a bit kitschy and fun and turn it into a bonafide creature feature, running at full force. Cronenberg takes every attempt to keep the science relevant and push forward with the story of Brundle’s transformation, whereas a lesser filmmaker could possibly have turned this into a monster-chase-man cinematic experience. The psychological effect of becoming a human fly is more or less lost on Brundle, who treats himself as a scientific breakthrough; a specimen of the rarest kind. In contrast, Veronica is completely distraught, and rightly so…I mean, I don’t think I’d be excited at the prospect of watching my own significant other vomit on their food to consume it and stick to the walls.

This contrast is incredibly powerful and makes for a tense story, far from being a one-dimensional creature feature, which is something that so many movies like this get wrong. There have been too many films that have fallen short due to an omission of any sort of emotional investment, or including one and having it fall flat from being forced and unbelievable. That cannot be said for Goldblum and Davis’ performance in the film. Adding to it is the “smal” twist that Davis’ character is actually involved with another man at the time of meeting Brundle.

Goldblum is at his finest here with his unique and eccentric line delivery, as well as his surprising capability to don so many prosthetic effects and still act in a convincing manner. Many of us know him as the often strange but lovable scientist, but there are those who forget that he can also be the just plain strange or even monstrous scientist. 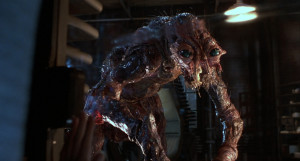 Part of the greatness of The Fly comes from the incredibly lifelike makeup effects by Chris Walas, inc. As opposed to the original film, the scientist does not don a fake fly mask and pincers; instead, his body deteriorates, goes through an extensive accelerated aging process, and ends up looking like a grotesque and sickly fly. Nearing the film’s ending, the horror will turn into pity, and the film becomes a science fiction tragedy of epic proportions.

Immediately upon its release the film was lauded with accolades and praise. There are some underappreciated films that go through decades before being rediscovered and then reconsidered. The Fly had the uncommon experience of garnering extremely positive reviews immediately, growing and growing with each passing year. It’d be a lie to call the film underrated; a better word may be overlooked. The Fly’s biggest enemy is being tossed into a genre that is so often cluttered with less-than-average films, thus being lumped into the same category until it is stumbled upon by accident or shown to you by a kind friend…in this case, me. Watch this movie. I’m telling you this because we’re friends.

I mean…we are friends, right? And while we’re on the subject of 1986, keep this year in mind for future pieces by me. The year was loaded with tons of gems in the sci-fi and horror genre. Stick with me here; I have so much to talk to you about.

The film is one of tragedy, heartache, repulsion, and terror. The characters are three-dimensional and incredibly well-developed, thanks to Cronenberg’s masterful directing skills. If you’ve ever had any apprehension to the film due to the remake factor, please do yourself a favor and put that aside for this film.

Check out our newest section for the Geeked Gods-Retro Recall