The Flash #25 Review By John Saavedra The Reverse-Flash’s story has always been one of obsession. Eobard Thawne of the 25th Century had always looked up to The Flash,...
by Guest June 28, 2017 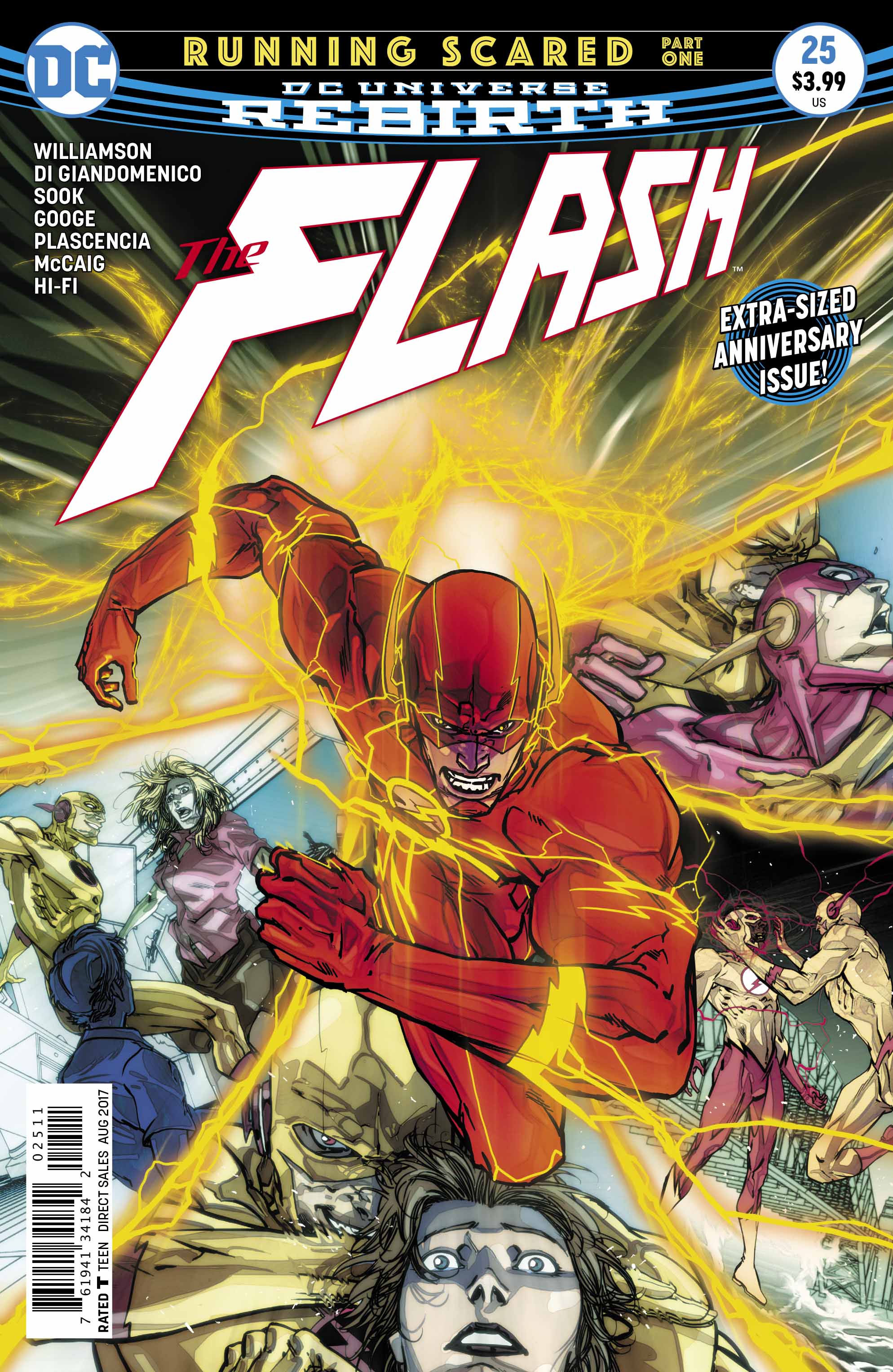 The Reverse-Flash’s story has always been one of obsession. Eobard Thawne of the 25th Century had always looked up to The Flash, an adventurer from the distant past whose exploits were legendary, so when Thawne found a time capsule with Barry Allen’s old Flash suit he knew he was destined to follow in the hero’s footsteps. Unfortunately, Eobard is driven mad by his obsession with Barry, who must stop him from hurting the people of 25th Century Central City. For their rest of their lives, these opposite forces will be locked in a fight through time. The biggest irony? Each is responsible for the other’s existence. At least that’s how it goes in this special extra-sized anniversary issue of The Flash. 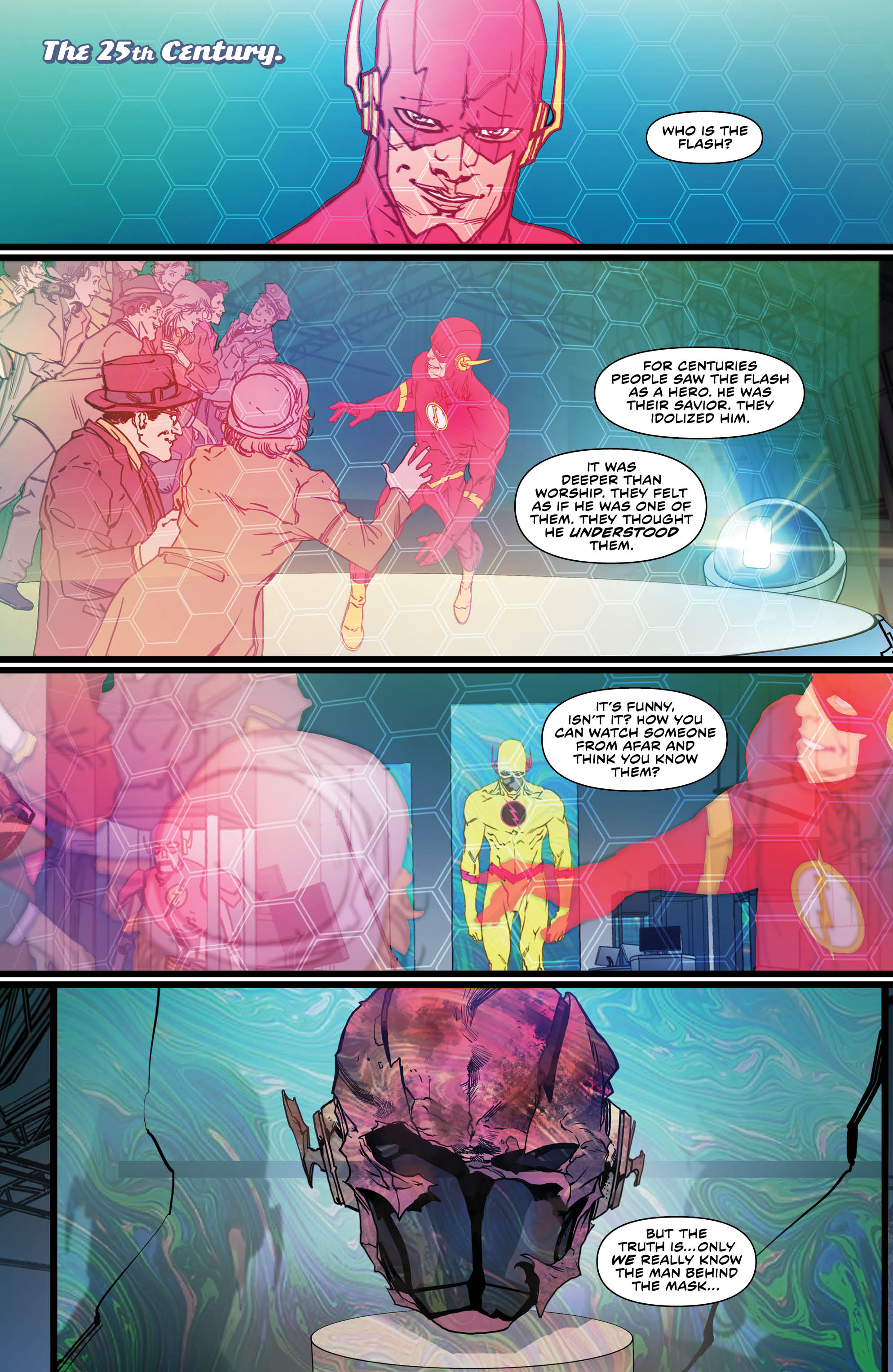 The Flash #25 reimagines the complex origin story of the Reverse-Flash, presenting it as a time-traveling tragedy that almost makes you feel bad for Thawne. That’s to Williamson’s credit. He writes a heartfelt opening scene where you can really feel Thawne’s admiration for the hero and that he’s doing the best he can to “protect” Central City without any guidance. When Barry actually shows up in his time, that’s all thrown for a loop and it’s revealed that Thawne’s actually been putting people in danger in order to save them. (This actually reminded me a bit of Mr. Glass in M. Night Shyamalan’s Unbreakable. In that movie, Glass causes several accidents in order to lure out someone who could potentially be a superhero.)

This remixes the events of Reverse-Flash’s very first appearance in the comics, The Flash Vol. 1 #139 by John Broome and Carmine Infantino, which presents Thawne’s origin story in a much more black-and-white way (it was the ‘60s). Thawne does indeed find the Flash suit in the time capsule, but he decides to use it to commit crimes from the start. In fact, Williamson’s origin story is an amalgam of the many origins of Thawne throughout DC history, from his post-Crisis and Zero Hour origins to the New 52 backstory. It’s a fun look back at the villain that actually provides a really great entry point for those who haven’t been following DC Rebirth. These pages are particularly welcoming to those who’ve watched CW’s The Flash. I felt that Williamson was playing to that crowd in particular. 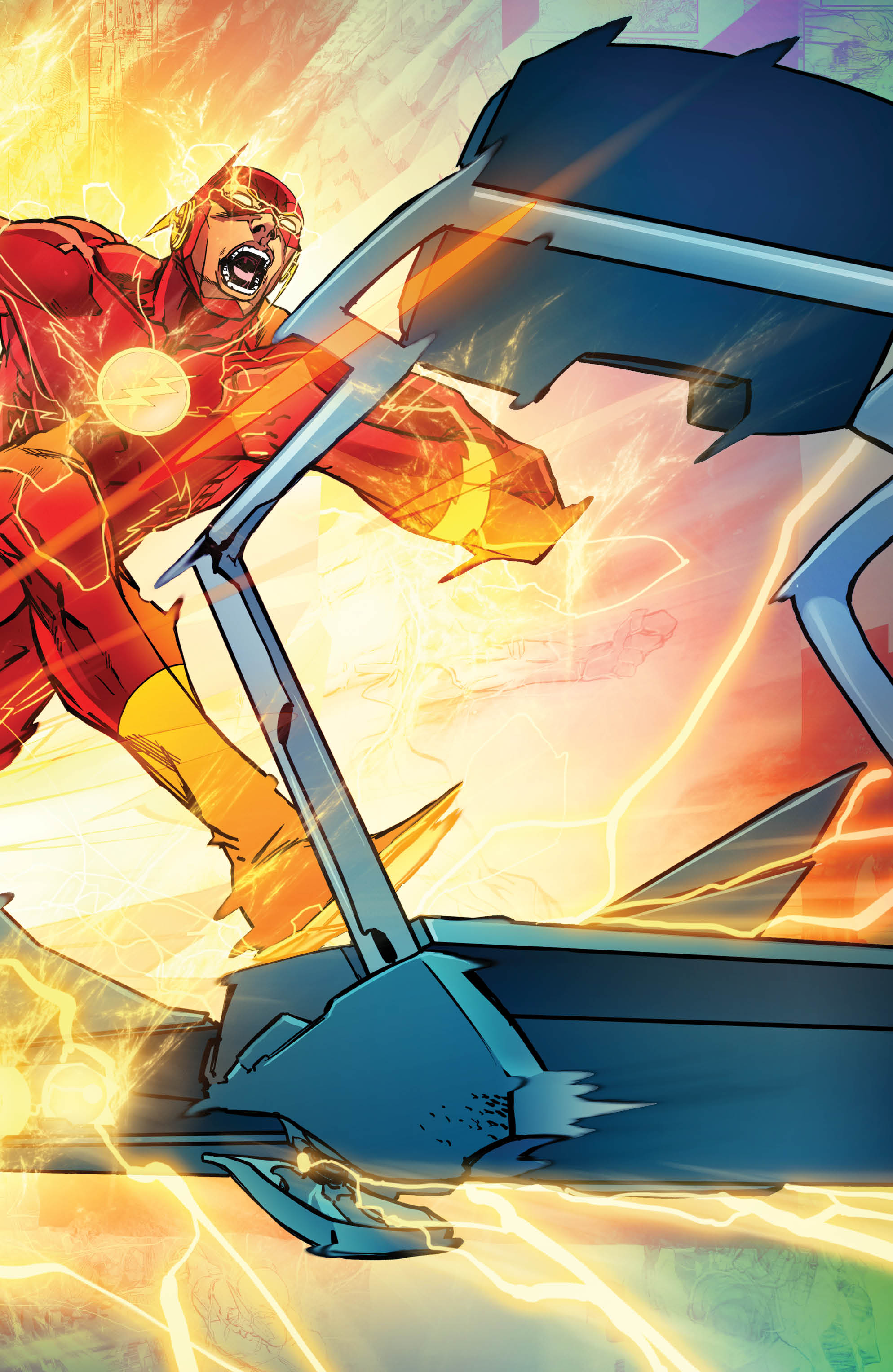 Regular artist Carmine DiGiandomenico handles all of the present action in this issue, while Neil Googe and Ryan Sooke draw the flashbacks. I especially enjoyed the more photo-realistic approach of Sooke and Googe’s art, who add a nostalgic sensibility that perfectly complements this story. DiGiandomenico does fine work too, although I felt that his much blockier style didn’t quite fit the tone of the book. At times, I felt like his pages looked a bit rushed. 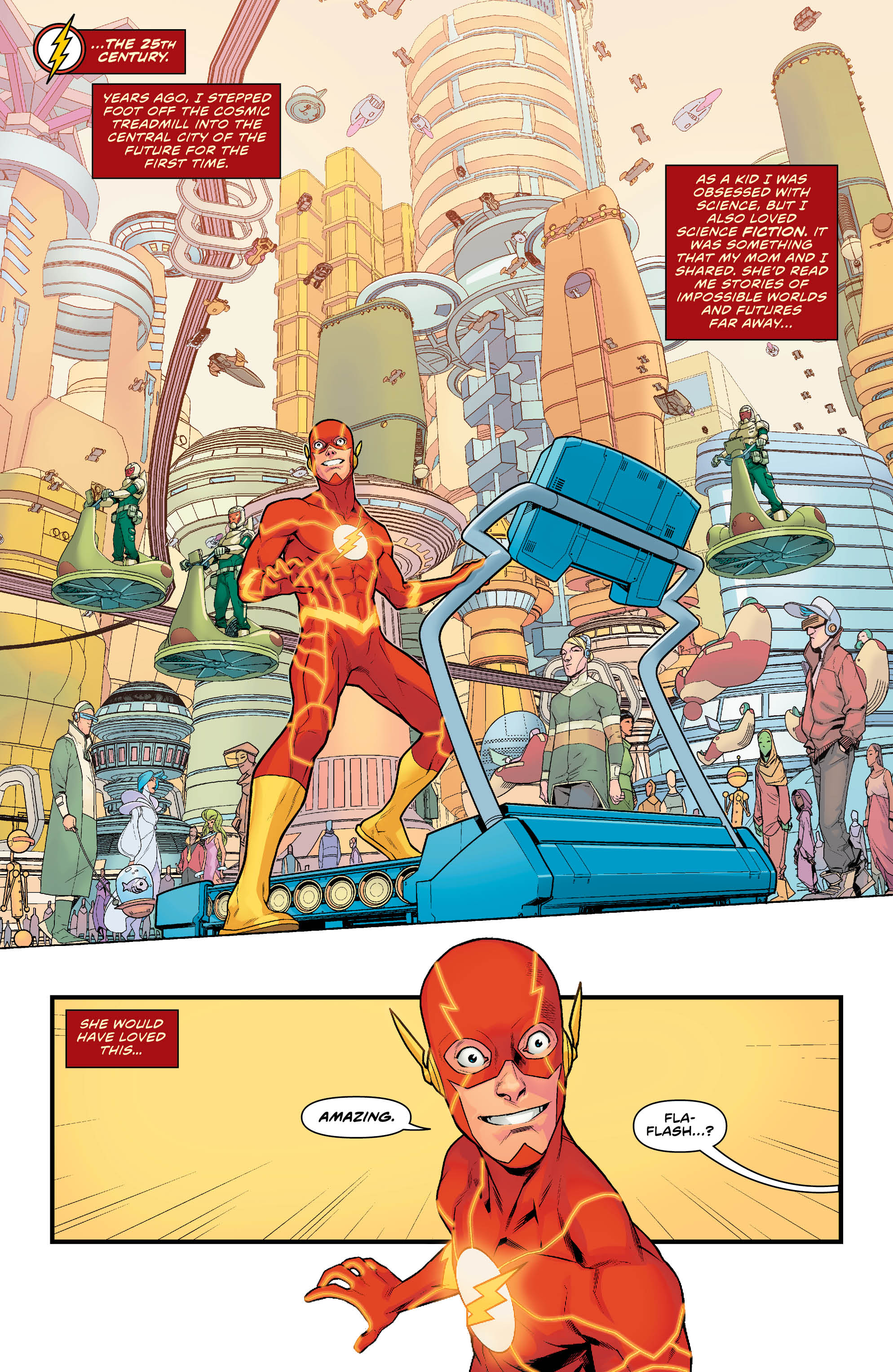 Ivan Plascencia, Hi-Fi, and Dave McCaig’s colors are excellent. The palette is a bit more muted than what you usually see in Flash comics, but I think it goes well with the subject matter. We’re entering the dark caverns of Thawne’s mind and the visual representation of that is just fantastic. 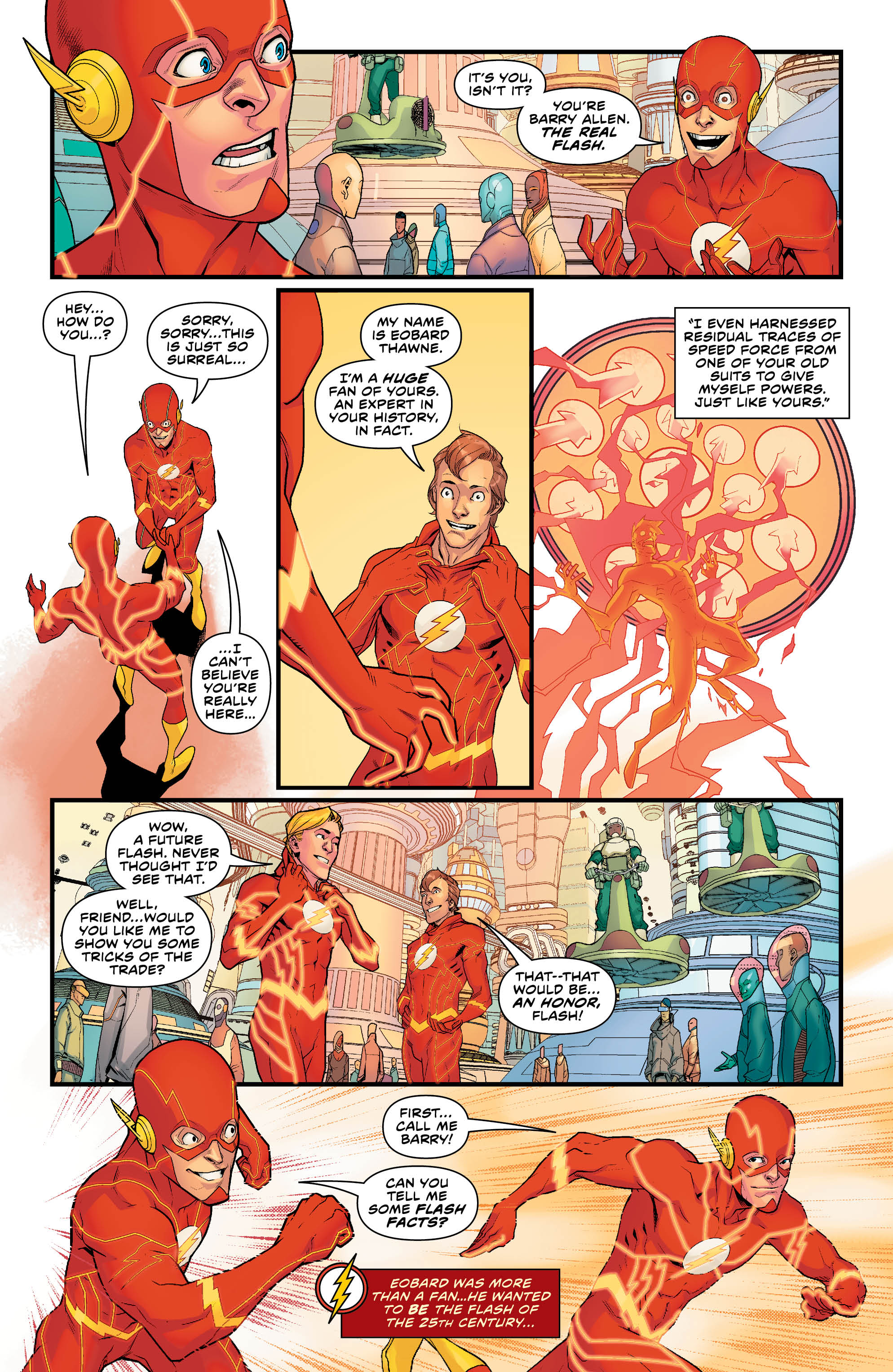 “Running Scared” is a story about why Thawne is Barry’s ultimate arch-nemesis, and Williamson and the trio of artists do not disappoint. I can’t wait to see what else unfolds in this tale of madness.