The Darkness (2016) – Review If there’s one word that could be used to describe The Darkness, it would be “uneventful”. It’s a movie with tons of great ideas... 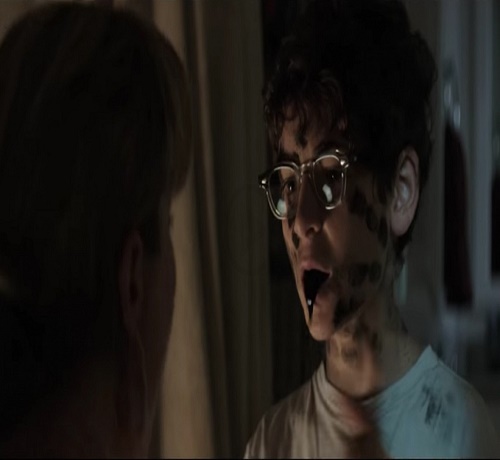 If there’s one word that could be used to describe The Darkness, it would be “uneventful”. It’s a movie with tons of great ideas that is brimming with potential, but somehow falls a bit short by not really having much to offer despite its interesting premise. It’s not horrible by any means, it’s sort of just mediocre – which is even less memorable than a movie that’s truly horrible.

The Darkness begins with the Taylor family on a camping trip with another family in Arizona. The introductory sequence serves as little more than a platform to which the basic character traits can be established. Michael’s autism is revealed by his older sister Stephanie (Lucy Fry) when she tells a family friend that “he doesn’t see the world like most people.” The mother, Bronny (Radha Mitchell), is revealed to be an alcoholic when seen refusing alcohol and opting for a Coca-Cola instead. Later, she sees Peter (Kevin Bacon) out of the corner of her eye getting maybe a little too cozy with the mother of the other family with an almost defeated look, indicating that he’s probably had a history of infidelity. While Michael is left alone in the stony mountain trail of the Grand Canyon, he falls through the floor and finds an altar of sorts with a set of black, shiny stones upon them. He takes them with him, and once they return home, weird things start happening, and it soon becomes apparent that something is wrong in the Taylor household.

While it’s not established in the opening sequence like the rest of the other issues with the family, we soon find out that Stephanie is bulimic. All of these traits – the infidelity, the autism, the alcoholism, the eating disorder – do not come into play whatsoever, which makes one scratch their head as to why they were put there in the first place. It’s disappointing, too, as this family has a lot going on…but unfortunately, any deeper meanings or interesting backstories are left out in favor of cliché poltergeist happenings in their home.

To me, cliché does not have to be a bad word for a popcorn horror feature such as this. I can see the merit in watching a 90-minute movie that relies on nothing but jump scares and themes that are commonplace in the genre. While films like this are hardly ever revolutionary, it’s hard to debate that they’re not fun. You’d expect The Darkness to pack at least a little more excitement; after all, it’s got almost every cliché in the book. A child acting strange, horrible smells for no reason, and unexplained events like the kitchen sink turning on by itself – but it seems as if The Darkness doesn’t really know how to handle these events with any real spook-factor. The movie is marred by long stretches of nothing, followed by an event that, on paper, should be at least a little bit creepy; but the flat atmosphere mangles these strange events into nothing more than a break from the monotony of having essentially nothing going on.

It’s a shame, too, because the relationship between Peter and Bronny piqued my interest. The two actors interacting always felt natural, and given a better script, probably could have made for a dynamic couple. The two are absolutely the best in the film, while on the other hand, Lucy Fry did her absolute best to overact and create a highly unlikable and aggravating character, which is a shame as she was excellent in 11.22.63 earlier this year.

The Darkness is a film with very good ideas but poor execution. The initial setting and the Native American lore could have really been grounds for a new spin on an old Poltergeist-esque tale, but sadly, the film meanders and sputters around until its anticlimactic and abrupt ending. It’s a classic example of a great idea with no real sense of direction. It doesn’t even have the distinction of being horrible – it simply exists and will sadly be forgotten in about a week.

It is all the more confusing due to it being written and directed by Australian filmmaker Greg Mclean, who burst onto the scene a little while ago with his phenomenal and violent Wolf Creek in 2005. Something’s seriously not adding up here, as the ingredients to an excellent film are all presented to us. I can’t help but wonder whether or not there were problems with the production in regards to budget cuts or post-production – there is something undeniably off here, and I refuse to believe that with all of the talent and excellent ideas at play here that something has gone awry. But maybe that’s the optimist in me.