The Boy (2016) Review Creepy dolls are nothing new. They’ve been the subject of many movies, books, comics, and legends. Admittedly, when I first saw the trailer I had... 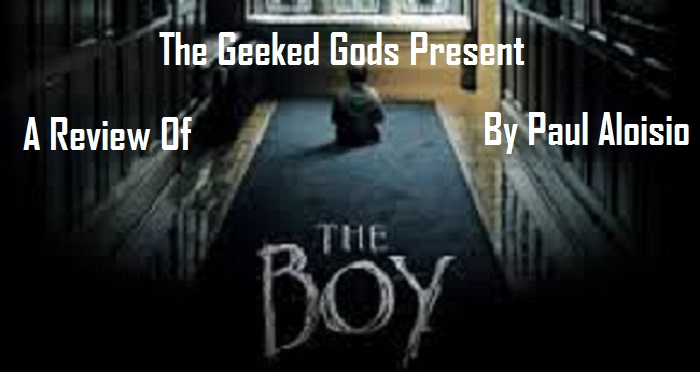 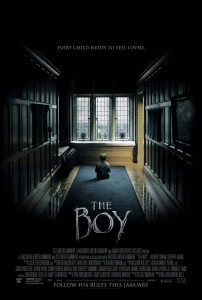 Creepy dolls are nothing new. They’ve been the subject of many movies, books, comics, and legends. Admittedly, when I first saw the trailer I had to roll my eyes at it, which is not something I like to do. You see, I try not to be jaded when it comes to new movies or books. I try and look at them in a positive light…no matter how dim it may appear at first. However, with The Boy, I just couldn’t shake it. The negativity was strong, and I carried it with me even as I purchased my ticket at the theater down the block, thanking whatever gods would listen that I was only spending eight dollars as opposed to the thirteen or fourteen I would have spent at a bigger, nicer theater. The trailers started and I remarked that, though I had willingly purchased this ticket out of curiosity, the trailers would probably be more interesting than the movie itself. I can say with confidence that, despite my horrible outlook going into this movie, I was proven completely wrong. The Boy is creepy, extremely well-made, and also very original.

The Boy was directed by William Brent Bell, and stars The Walking Dead’s Lauren Cohan as Greta, a nanny, who has been hired to take care of an elderly couple’s young boy as they leave on vacation. To Greta’s surprise and dismay, the boy in question is actually a porcelain doll named Brahms. Greta is instructed that, although it may not seem to be true, the boy is very much alive, and their list of written rules must be strictly followed. This includes feeding him, playing music for him, tucking him into bed, and even giving him a good night kiss. Greta quickly finds out from Malcolm, a local grocery-delivery boy played by Rupert Evans, that Brahms, in fact, was alive once…twenty years ago. The child, on his eighth birthday party, died tragically. Because of this, Greta concludes that the doll is a coping mechanism for the grieving parents, but after a series of strange events, she starts to believe that maybe there is more to the doll than meets the eye.

Regretfully, that’s all I can say without including any major spoilers. The film, as it goes on, gets incredibly inventive just when it feels like it’s about to become a carbon-copy creepy doll film, and the third act was one of the biggest surprises that I’ve seen in a movie in a long, long time.

The greatness of this film is due to mainly that fact; if writer Stacey Menear had decided to do it any other way than the final product, I am sure that this film would have fallen flat on its face. Instead, it stands out to me as one of the bigger surprises in a major Hollywood horror film in recent years. The surprise also comes from most people’s generally terrible attitude towards the film from the get-go; ashamed as I am, I must admit once again that I was one of these people. I’ve let my judgement get clouded due to my preconceived notions about a film that I knew basically nothing about, save the general synopsis, and let it carry through until the film was over thirty minutes underway. I will say this, though; I will always admit when I am wrong. I love to be proven wrong, actually, and when a movie that looks terrible turns out to be good, well…there’s just no greater relief. But enough about my terrible attitude for now.

The dialogue, though a little flat, is well-delivered and given an earnest effort by stars Lauren Cohan and Rupert Evans. While their lines are pretty standard, both of these actors give them life and color, making them pretty convincing. Greta is a girl who is hiding from a broken past, and Malcolm is just your standard all-around good guy, trying his damnedest to just get a date with the beautiful new girl in town. Their chemistry is convincing; nothing about the two of them conversing ever seems forced. This comes as no surprise, as both actors are very skilled and have proven that in previous roles, but you’d be surprised what havoc a poor script or directorial effort can do to an actor. I mean, have you seen Dreamcatcher? It made even Morgan Freeman look bad!

The rainy, gloomy, English atmosphere in which the film’s events take place in, mixed with the low-key orchestration played alongside the film, make for a very creepy mood. It’s nice to see a film that’s all gloom, for the most part; one of my biggest gripes with cookie-cutter horror films are the happy, teeny bopper introductions with sunny skies, laughably contrasted by later sinister events. Here, it’s just sad. It is just very sad, and very misty, and very wet.

Another happy surprise for me was the lack of jump scares. Truthfully, I’ve no problem with them; seen in a big theater, a movie filled with a bunch of cheap jump scares can be a fun time. However, The Boy decided to rely on atmosphere and intrigue rather than loud noises and faces popping out at you from out of nowhere, making for a delightfully moody film. While the film does take a while to get going, when it finally does, it’s very good.

The bottom line is this: you should go see The Boy. There are many jaded reviewers out there who are going to call this movie on more flaws than it actually has and try to persuade you that they were right in their prediction that this movie is going to be worthless. Don’t let things like that get in the way of you seeing this film for yourself. If anything, I am apologetic to The Boy; I left the theater with a smile on my face due to a happy surprise, and for that, I feel bad for my initial reaction to the whole idea of this movie. It’s a slow burn, yes, but it’s got a lot of atmosphere and a twist that you won’t soon forget.

I’m sorry, Lauren Cohan…I was wrong. Your movie was great.