“The 5 Stages of Board Gaming” By Tahlia Merrill Kirk   In case you haven’t heard, there’s a board gaming renaissance going on right now (https://www.bostonglobe.com/ideas/2012/03/11/inside-board-game-renaissance/XXRfS0Ble3X9BGgrZlA7wO/story.html ). It hit...

In case you haven’t heard, there’s a board gaming renaissance going on right now (https://www.bostonglobe.com/ideas/2012/03/11/inside-board-game-renaissance/XXRfS0Ble3X9BGgrZlA7wO/story.html ). It hit America about five years ago and every year it keeps growing bigger.

You may ask: How has this happened?  What has taken so many people from Uno to Insert-Obscure-Board-Game-Name-Here? Hardcore gamers don’t blossom overnight and while we all have traveled our paths, here’s the way it generally works:

You’ve outgrown fluffy childhood favorites like like Mousetrap and Candyland and played Scattergories until you’ve unintentionally memorized the lists. Maybe you hate the monotony of Monopoly and the randomness of Yahtzee. Or maybe you love the old standards but have played them to death. Either way, you’re sniffing around for something new.

The day comes when you’re introduced to a new game. Your eyes meet across a crowded room, and you feel the sizzle of instant connection. Your world has been turned upside down.

Likely Gateway Games include Settlers of Catan, Cards Against Humanity, Apples to Apples, Magic the Gathering, and Risk.

You have one game that you play over and over and over again. This is the gamer’s version of binge watching a tv show. Your collection probably begins and ends with this one single game, but it looks much bigger because you’ve bought ALL the expansions! 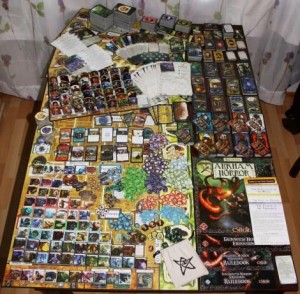 You’re plugged into a gaming group. They introduce you to a wide variety of games. That first crush game? You’ve probably discovered new ones that put your first crush to shame. You’ve learned that not all expansions are created equal because often, they just add unnecessary clutter to the experience. *sniffs* Our little board gamer is growing up, someone give me a hanky!

Your gaming collection is vast and diverse. You watch reviews of the latest games on Youtube and have lengthy discussions with your friends about the pros/cons of particular game mechanics.

Terms like “eurogame”, “worker placement”, and “deck building” are part of your vocabulary. You’ve contributed to Kickstarter campaigns from your favorite designers (yeah, you remember designer names now).

Maybe you’re planning on attending a board game conference this year. Maybe you’re *cough* writing blog posts about board gaming. Perhaps you’re even designing your own game. Welcome to the inner circle, friend