The 11.22.63 Miniseries is Flawless There may be no greater feeling of relief than when a television show that you’ve spent hours watching holds up all the way through...

There may be no greater feeling of relief than when a television show that you’ve spent hours watching holds up all the way through the end. You spend hours with these characters (in this case, around eight) watching about them and learning about them. By a couple of episodes in, if done well, it may feel like you actually know them. To have a show leave off on a lackluster final episode is simply a stab in the heart; it’s a pretty bad feeling. Not only does 11.22.63 have the perfect ending, it can also boast that every episode in this 8-part miniseries has been phenomenal.

When we first left off, I was gushing about how incredible the series had been up to its halfway point, which you can read here. I have not been let down by any episode after that point; throughout the entire miniseries, there was not a single episode that felt like it was filler. And if you only have a certain amount of episodes, you really cannot afford to have episodes that are simply mediocre (ahem, Chris Carter).

The show has every aspect of an excellent feature film, with the benefit extended into an eight-hour experience. Everything from set design to cinematography to its dialogue is done just as well as something your local theater could charge you upwards of $13 for. The JJ Abram’s Bad Robot production company clearly has spared no expense here in creating an environment in which you can truly care about each and every one of these characters…even Daniel Webber, who fantastically portrays Lee Harvey Oswald to be a man of complexity and deep-seated hurt. There’s a sense of pity that he emotes onto the viewer, despite his less-than-honorable intentions. Webber does an incredible job of making his character’s actions seem heroic to him while it would be probably much simpler to portray him as an evil villain. Oswald is no villain here; he’s a conflicted man who wants to make his mark on this world, even if it means assassination. 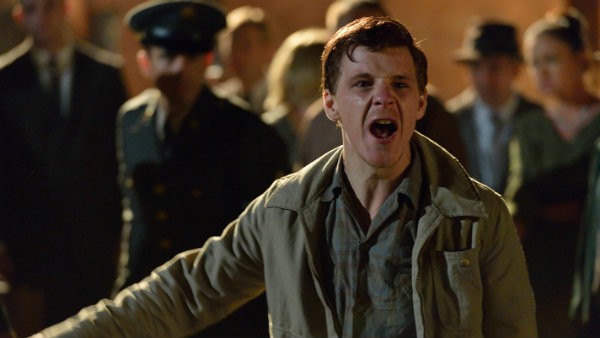 While it is completely understandable that many viewers may feel as if the show has strayed too far from the Kennedy storyline and put its focus on the relationship between Jake and Sadie, I have to heavily disagree. Yes, their relationship does become the main focus, but that’s not such a bad thing after all. In fact, it turns into the show’s greatest assets.

One must remember that this show was based on a novel by Stephen King, a man whose strength has always relied in his ability to make whatever characters he writes about more important than the events at hand. Each novel by him leaves the reader yearning to extend their relationship with these fictional characters. 11.22.63’s television adaptation does not stray from that in the slightest; if you let the show run its natural course, you will see just how important Sadie is to Jake. It gives the impression that to Jake Epping, Sadie Dunhill is more important than the president’s assassination, than his friend’s cancer, than the whole world. Which is more than okay.

The series says much more about love than it does about time travel. What we’ve learned time and time again is that altering the past will almost always have a negative outcome on the future – how many science fiction stories have you read by now that make that point? From the very beginning I was under the impression that if Jake did succeed in saving Kennedy that the future would be drastically altered…and probably not for the better. In fact, saving Kennedy was the worst thing that Jake could have done in his seemingly endless line of mistakes in the name of a greater good.

Though one could criticize James Franco’s character for constantly getting himself into trouble due to his actions, they’re almost always due to him acting with his heart instead of his head…which makes perfect sense why Sadie would become so important to him. Like many others, I shook my head when the two first got together on screen, because I knew that from this point on, there was no way their relationship could end well, no matter how badly I wanted it to. Sarah Gadon, from the beginning right to the very end, plays a beautiful, smart, and caring individual, deserving way more than what fate has handed her.

Which could be said about most of the characters on the show, could it not? Chris Cooper as Al Templeton wants to stop his cancer. Georg MacKay as Bill Turcotte wishes that his sister was alive. Leon Rippy, as Harry Dunning, the sweetest man alive, would do anything to make it so that his father never killed his mother…however, Jake realizes that there is nothing he can do for this people. Though he saved Dunning’s mother, in the future she is still taken from him; he is left as a broken man in a war-torn country- all because of Jake. Which is to say nothing about Kevin J. O’Connor’s character, the only man in the past who is aware of the time travel, who must endure the most agonizing pain imaginable by watching his son die every time the someone uses the power of time travel. The past, the present, the future…it’s all much bigger than one person and will affect everyone.

With that in mind, there is no way the show could have ended any other way. Jake could have gone back and romanced Sadie; instead, in one of the most touching moments ever put to screen, he simply asks her at an older age if she’s had a good life. When she responds that, yes, despite many hardships, she has, Jake is content; his love is not selfish. He’s proved time and time again that he just wants to do what’s right. It is this closing scene that wraps up the show in the most tender and heartfelt way possible…11.22.63 will warm your heart. It’s a show that I will most likely be thinking about for years to come.