That Old Familiar Feeling: Fallout 4 Review When I finally reached a point in Fallout 4 that felt like some sort of ending, I stopped to look at my...

When I finally reached a point in Fallout 4 that felt like some sort of ending, I stopped to look at my playtime only to discover that I had somehow managed to sink around 70 hours into my adventures though The Commonwealth. While it may not be the most drastically different game Bethesda has ever made, it nevertheless captures the unique essence that has made has made almost every one of their RPGs an endlessly engrossing and nearly impossible to put down. 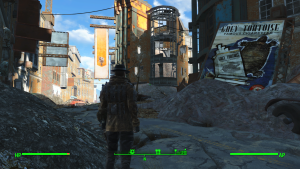 Fallout 4 is Bethesda’s second official entry into Fallout series. In it you play as the sole survivor of vault 111 , a character of your own creation who was cryogenically frozen just before nuclear bombs devastated the American landscape. You’ll wander around the bombed out ruins of Massachusetts meeting a variety of interesting and sometimes likeable characters who will give you quests as you try to find a way to make your own mark on the world you’ve suddenly been thrust into. Eventually you’ll meet the Commonwealth’s various factions who are all fighting for what they believe is the greater good. With no clear villain you’ll be forced to pick side and it won’t be an easy choice. 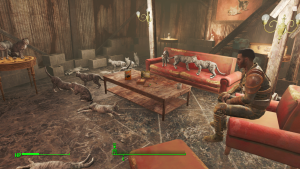 From the moment the game starts, it feels familiar like many Bethesda games do. But Fallout 4’s biggest success is in incremental improvements. Character creation has received a massive overhaul leading to some of the best looking player characters I’ve seen in a Bethesda game yet. Gunplay without VATS, feels like much more of a viable option than it ever did in Fallout 3. All of your favorite enemies from Fallout 3 make an appearance from raiders to feral ghouls and super mutants you’ll even run into the occasional deathclaw, they all feature revamped designs and animations. And did I mention that the character you make is fully voiced? Your character has a full voiceover whether you choose to make a male or female avatar and it isn’t only for certain scripted story moments either, you character speaks during nearly every possible random interaction in the game. 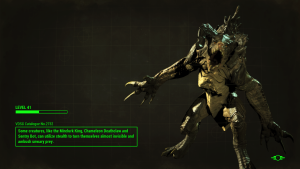 The best new development for Fallout 4 comes from the fact that nearly every gameplay system and item feels useful and has a purpose. Remember all the useless junk you found lying around in previous Fallout games? Now every piece of junk can be broken down and utilized in the games all new crafting system which allows you do modify every aspect of your weapons and armor (although there are some strange limitations) and eventually build your own custom settlement. Elements like radiation now pose a tangible threat. Companions are also much improved, now giving you the ability to command them directly. The games speech system has also been replaced with a more “Mass Effecty” choose one of four vague options system. I didn’t have an issue with this but it did lead to some weird dialogue choices that weren’t what I expected.

The story itself is good but not great. There are some standout moments but don’t expect anything on the level of Liberty Prime from Fallout 3.  If you’re familiar with films like Blade Runner, you should have a decent idea of what to expect. The game has so many other interesting and unique missions that may just make the main story feel small by comparison. Some of my favorites were a series of mission where  I had to do some detective work and investigate missing persons cases in Diamond city, one of the game central hubs. The games world seems like it might be geographically smaller than Bethesda’s previous games, but it makes up for this by positively packing the world with things to find. There are almost no roadblocks which makes Boston feel more like the ruins of a major city than D.C. ever did. It also leaves room for plenty of iconic Boston historical sites with their treasure to find. Everything in Fallout 4 feels like it links together naturally, meaning that no side quest feels out of place and every locations feels like it belongs. 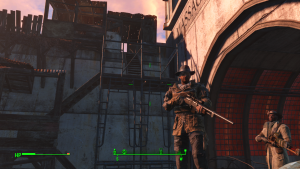 As with every Bethesda game, there are some minor glitches most notably some minor framerate drops during busier moments but none of this effected my enjoyment of the game. I played on Xbox One and did not seen any major problems with the exception of one freeze and moment where character appeared in the story when they shouldn’t have. Overall Fallout 4 is a fantastic entry in the series. I recommend it to anybody who loves Bethesda’s previous games, action RPGs an anybody who wants to explore a vast vibrant and often bleak world.