The Texas Chain Saw Massacre (1974) – A Retrospective A couple approaches a grimy looking house in the sweltering August heat. They are in Texas. The man knocks on... 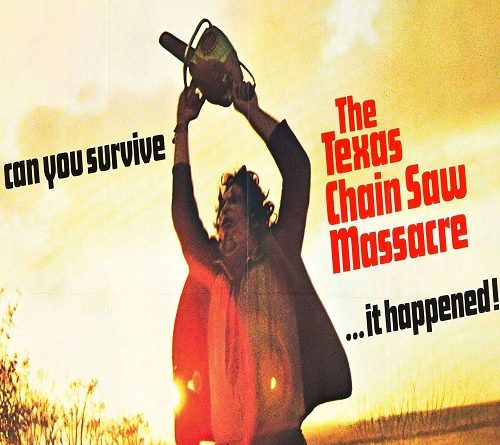 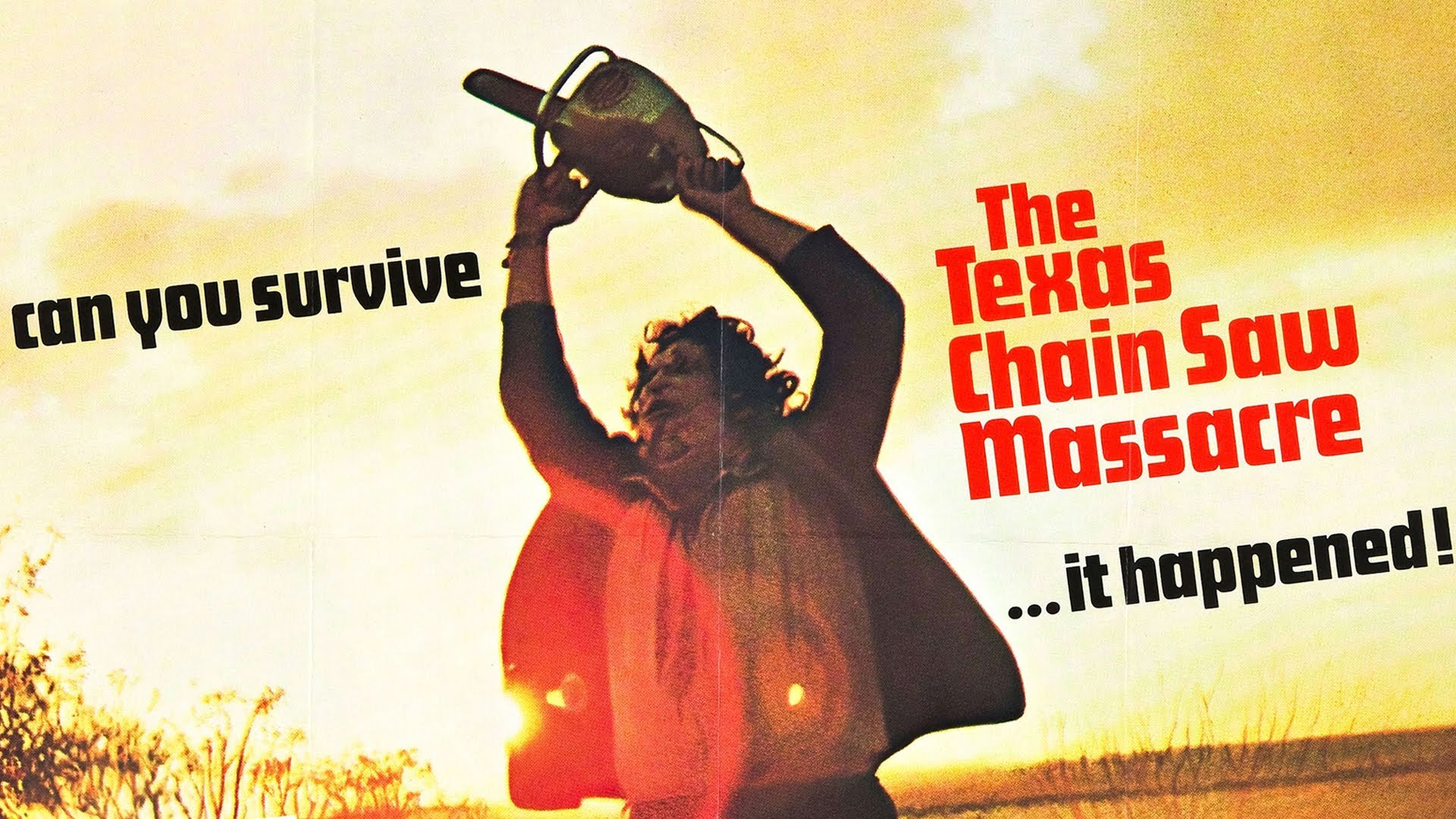 A couple approaches a grimy looking house in the sweltering August heat. They are in Texas. The man knocks on the door to see if anyone is home; when the door swings open, he lets himself enter. His girlfriend waits outside, sweaty and frustrated. As he peruses the interior of the seemingly abandoned house, a metal door slides open suddenly. A man with something – is that human skin? – on his face is perfectly framed, a hulking mask in the doorway. With nothing more than a grunt, the brute swings a mallet and crushes the visitors head. The scene is silent as the man convulses, shaking and bleeding. Another crack to the skull and the man dies. Cue music.

What I have just described is the first instance of true depravity in Tobe Hooper’s classic 1974 film, The Texas Chain Saw Massacre. With this scene comes the unwavering message that human life is both fragile and quickly disposable; to some, also a delicacy. There may be no better example of gritty grindhouse horror than this. It is violent yet artful. A masterfully made slice of sheer terror that has remained unsurpassed in its stylistic qualities and ambiance nearly forty years later. 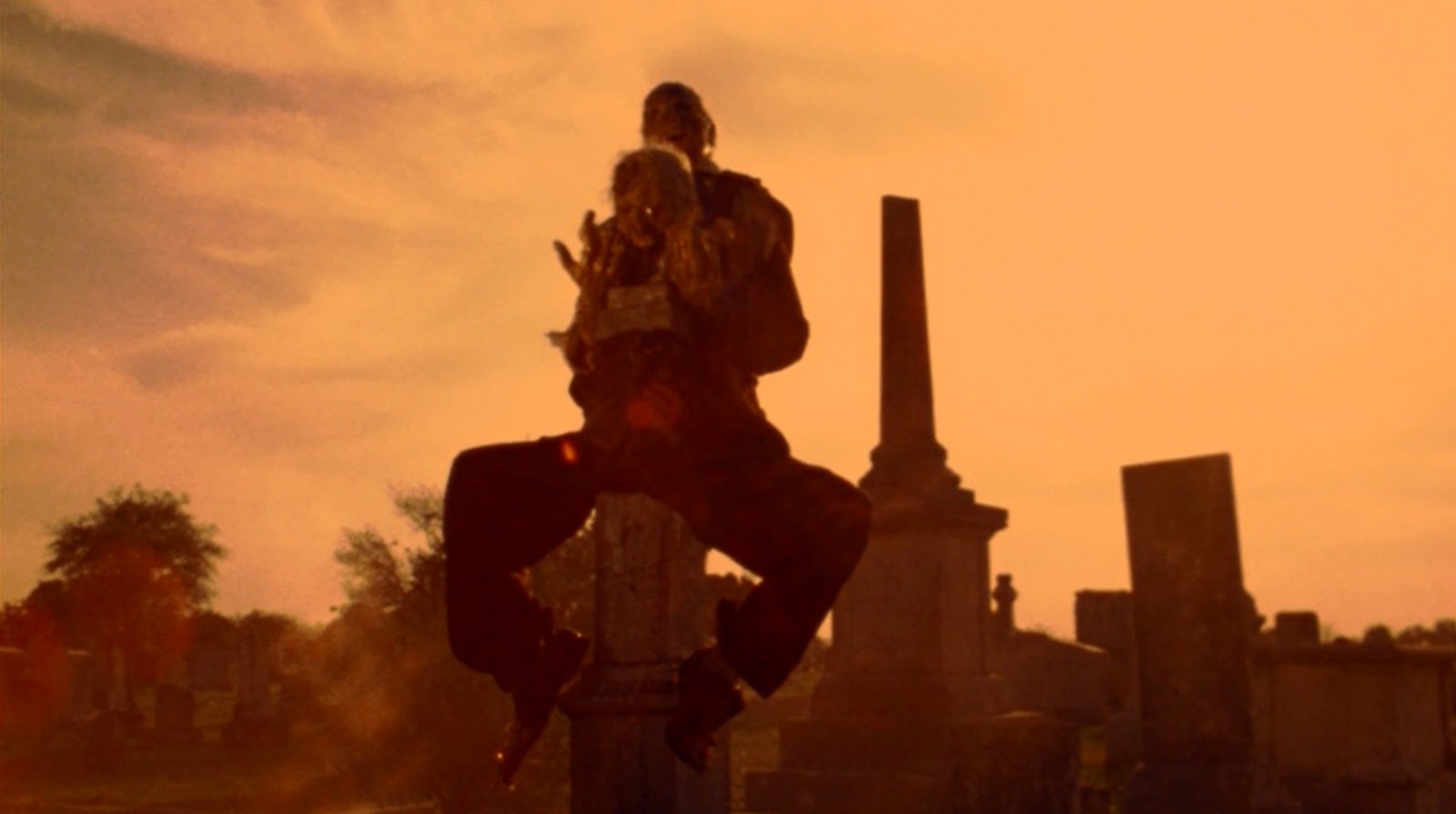 Written by the duo of director Tobe Hooper and screenwriter Kim Henkel, the film follows the story of Sally (Marilyn Burns) and Franklin (Paul A. Partain) Hardesty, two siblings on the way to their grandfather’s gravesite in Texas. Accompanied by three of their friends, the siblings find that the grave has been sadistically desecrated. They soon find themselves in a nightmare so terrible that any and all who could live to tell the tale would have most likely wished that they had died. This nightmare comes in the form of a cross-dressing, chainsaw wielding maniac and his family of psychotic Texas with a taste for human flesh.

The film contains a terror so realistic and terrifying that almost nothing I could think to write would possibly be able to prepare you. Tobe Hooper set out to create something inherently disturbing, to the point of almost coming off as cruel, and through Gunnar Hansen’s portrayal of Leatherface is certainly not the onscreen gore, of which very little can be seen. It’s the way in which the sound works with the unforgiving summer sun; the screeching, the crackling, the sounds of the human voice screeching in horror as the owner of the voice comes face to face with death.

Leatherface is seen here as a mentally retarded shell of a man, confused and hurt. It is questionable throughout the film as to whether or not Tobe Hooper’s violent creation is even aware of the hurt he is inflicting on others. He cries, screams, and whimpers like a wounded child – all while swinging a blade over his head in an unbridled fit of rage. Leatherface is a tragedy of a human being, a victim of life’s cruel circumstances. 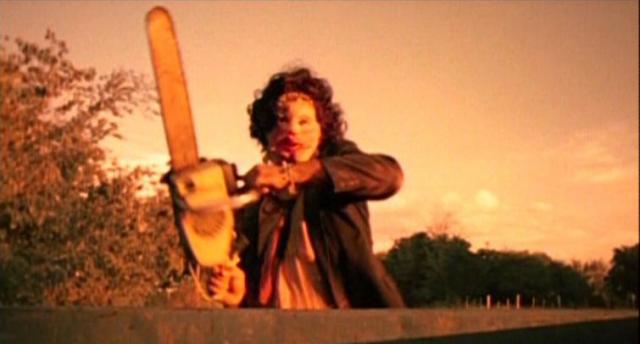 But do not mince words. The character is in no way a “good guy”. He is, in fact, a violent and deadly creature. He is pitiful and disturbed, emotionally crippled to the point of monstrosity. The mental disturbances possessed by both him and his family is the area in which the film truly reaches into your mind and squeezes it, twisting out sensations of shock, despair, and hopelessness. There is nothing happy about this film. Through the golden haze of the setting August day, a deep cruelty exists in this film. You can almost feel the sweat, and with it, the horror that permeates throughout each frame.

As mentioned previously, for a film so notoriously regarded as one of the most disturbing of all time it contains very little gore. There are a handful of scenes that could have pumped the blood up and shown limbs being severed, or even a meat hook through a chest – instead, all you have is the sound of a grunting Leatherface and the chainsaw ripping away. There is blood to be found here, but compared to earlier films by The Godfather of Gore H.G. Lewis, Chain Saw is almost tame. At the same time, the psychological impact and believability of Tobe Hooper’s film goes way beyond anything Lewis could have dreamed of. Contrast is the name of the game here. This can be seen in the fact that most of the killing and violence happens in the daylight underneath a bright sky as opposed to a hand reaching out from the dark. The setting is as ordinary as you could get. This film could happen; who is to say what kind of madness lurks inside of the numerous old, desolate houses in the middle of nowhere? 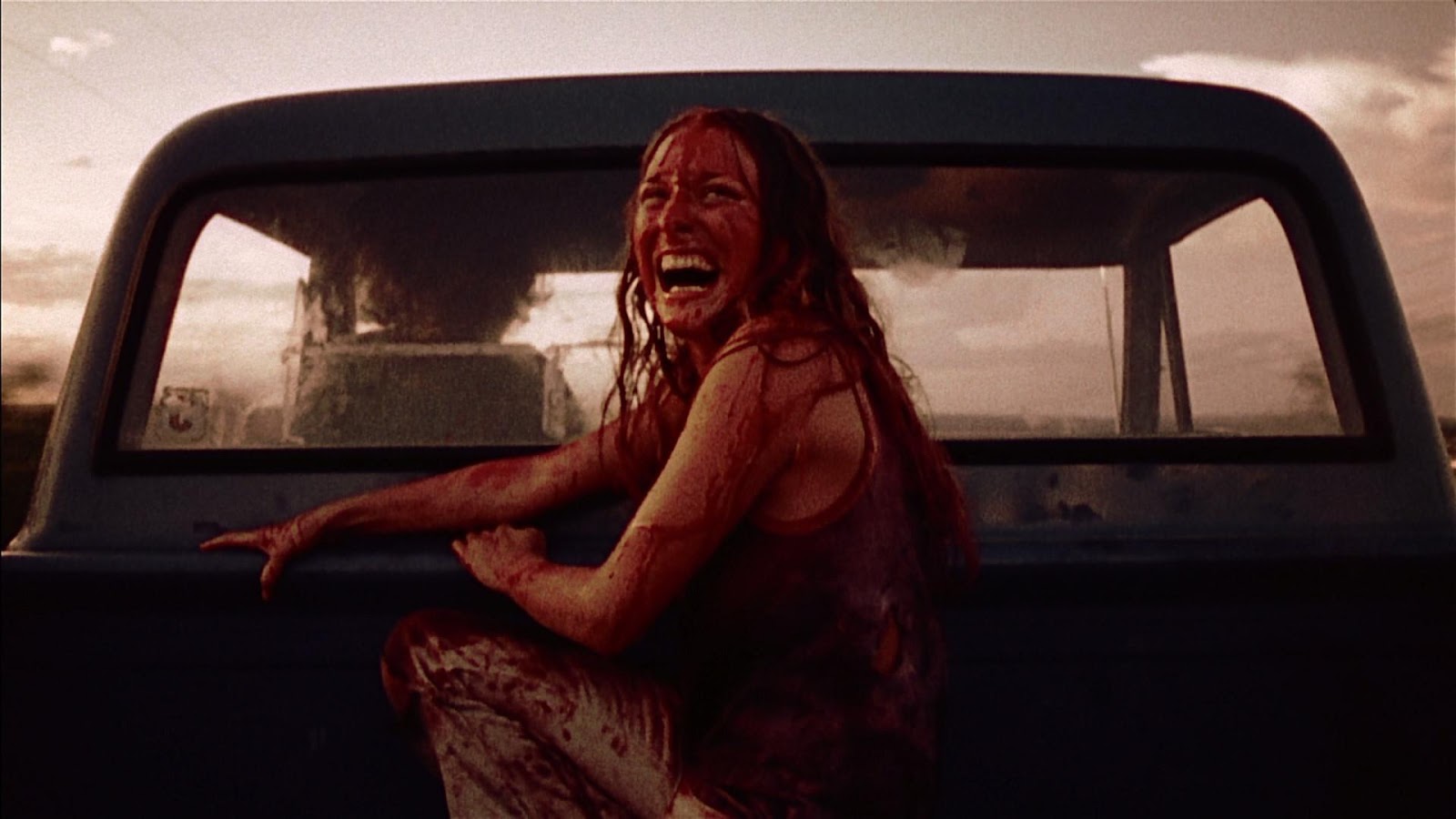 It could happen, and it did, in a way. There have been many parallels drawn between this film and the real crimes committed by Ed Gein, a man who murdered two (confirmed) women during the 1950’s and proceed to fashion furniture and masks out of his victims as well as multiple other exhumed corpses. It’s sickening and yet there is a bizarre fascination that many of us have with people who commit such heinous acts. What could have driven them to do such things? How are their minds so warped that anything like this is even a probable course of action?

It is for these questions, then, that must attract so many people to The Texas Chain Saw Massacre. It is visceral, bloody, and expertly crafted. Though it’s been given the bubblegum treatment and processed through the Hollywood system more than once, the original remains an outstanding experience that any fan of horror needs to witness at least once. 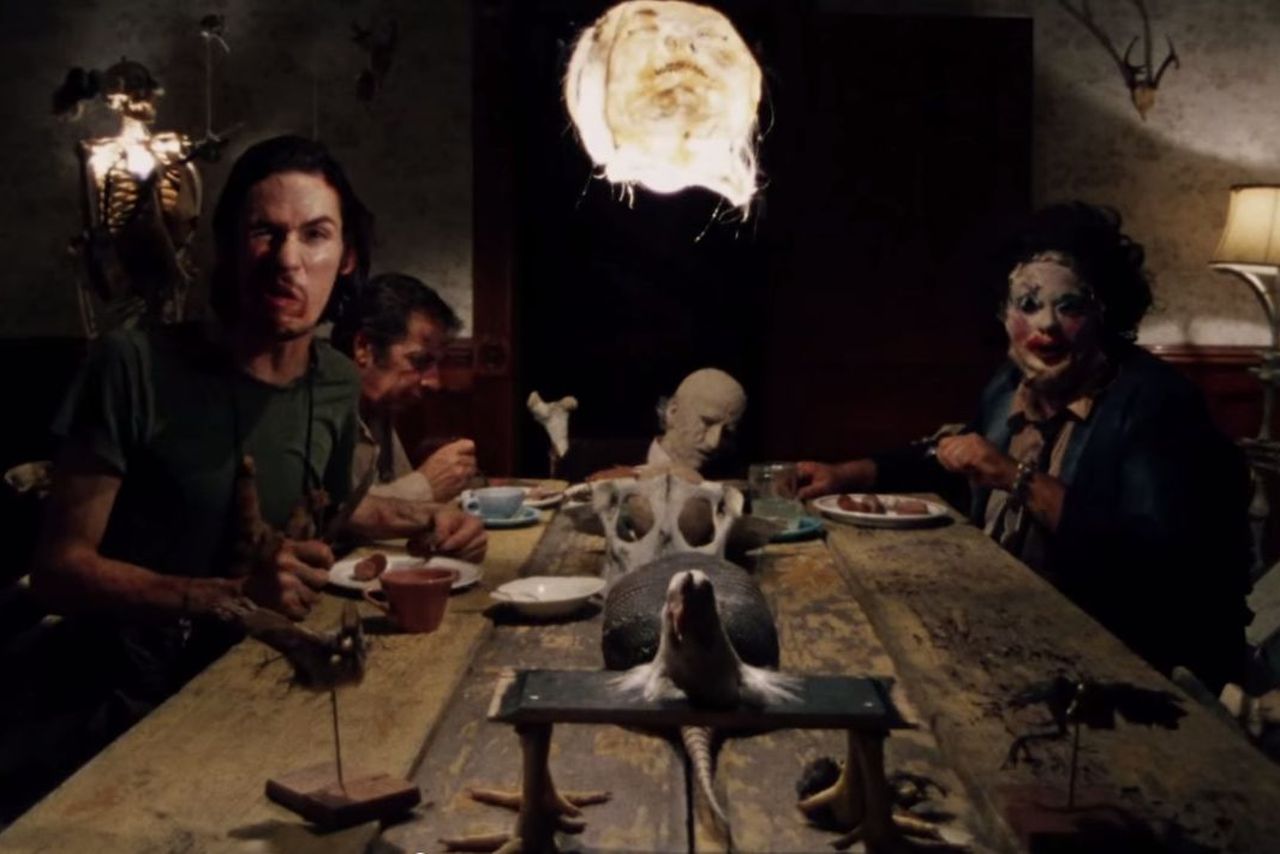