Death by corn, Mark Hamill, and incest. Oh yeah, and the hero is a cat. 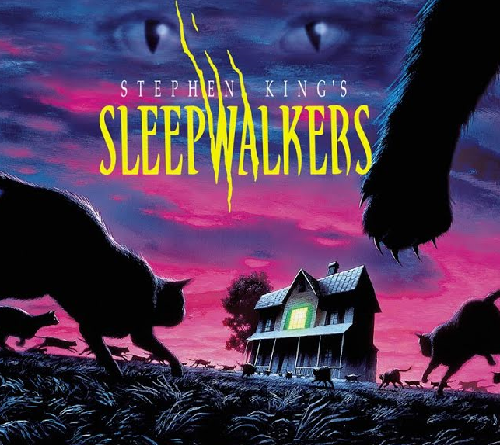 Sleepwalkers, Stephen King’s 1992 screenwriting effort, seems to be largely forgotten. And that’s really a shame. Not because it’s good – it’s not – but because it’s so overwhelmingly ridiculous. In the realm of bad horror movies, Sleepwalkers is a force to be reckoned with. It’s not exactly Troll 2, but that’s certainly not for a lack of trying.

I don’t think that there’s any way in hell that Stephen King really set out to write a serious horror movie with this one.It’s not just that it’s corny; it’s insane. I can’t accept any reality in which the man who wrote It decides to write a scene involving a woman kills who a man by stabbing him in the back with the corn on the cob with the intent of terrifying an audience. Not only that, but we have one-liners such as “Ha ha, Cop Kebab” after impaling an officer’s head with a pencil.

It’s very ridiculous, but it really just feels like King and director Mick Garris are having a blast making something unabashedly stupid and fun. The entire premise alone is something that must have been even a little bit of a joke. I mean, come on – the villains are feline-like shapeshifters whose only weakness is a fear of the docile housecat. And in that line of thinking, the cat (named Clovis) ends up being the hero of the film. The cat, by the way, isn’t anthropomorphized in the slightest. It’s just someone’s fucking pet cat named Clovis. 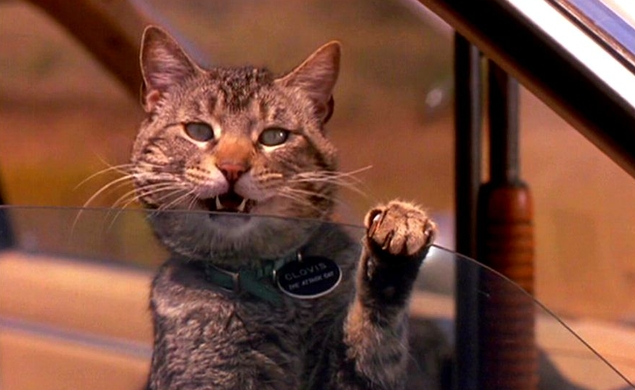 Then there’s the whole issue with the main villains. The titular sleepwalkers are mother and son; they also have sex with each other for no apparent reason. I waited the whole movie to find out why. I hypothesized that perhaps there was a strange connection between the two that only caused the son to refer to his mother as such. Perhaps it was sort of a vampire-type situation. Could she have bitten him, turning him into a sleepwalker, thus becoming somewhat of a mother?

No. There’s no such indication. They just really like to have sex with each other.

So the entire story revolves these two incestual sex freaks, and they travel from town to town killing cats and finding virgins to feast upon. The opening of the film features Mark Hamill with a Moustache (!!!) as a policeman who comes upon the body of a dried up dead girl. A victim of the sleepwalkers, as we will find out. This is in California. They then travel to Illinois or all places to find another virgin to feast upon. The virgin they choose is a young woman named Tanya played by Madchen Amick. Problems arise when those darn cats start taking notice of them – first by Clovis, then the whole feline neighborhood. This begs two important questions: first of all, why were they able to kill so many cats in California, but Clovis becomes such a problem?

This is not a movie written by some mindless schmuck on a quest for a quick payday from a horror movie. This is Stephen King; he wrote the almost painfully intricate Dark Tower series. The man can write a story. Whether or not you like his stories is not a part of this equation. The simple fact of the matter is, an accomplished writer such as this is more than capable of writing a plot that’s coherent, if not a little “out there.”

But Sleepwalkers is just insane. And I think that was more or less the entire point of the film. It feels like King is just having a blast making something totally silly and bloody. It feels like King and his buddy Garris are just having the time of their lives bringing death by corn to the big screen and spouting cheesy lines left and right.

Now, don’t get me wrong. While I do believe that most of the ideas here came about by King asking, “Wouldn’t this be a crazy scene?”, I don’t think he intentionally set out to make a bad movie. But I don’t think he meant it to be particularly nightmare-inducing either. This “shoot first and ask questions later” approach ended up yielding some very strange results. We also have the issue of the effects.They are not good. Here we have Party City Clearance Aisle costumes and Windows ‘82 CGI – and this is certainly not intentional.

Strengthening my hypothesis that Sleepwalkers is just King having a grand ol’ time is the inclusion of just about every important horror director of the 1980’s sans Carpenter and Craven. There’s a scene that features King himself, conversing with Joe Dante, Clive Barker, Tobe Hooper, and John Landis. Later on in the film is also Ron Perlman, and I’ve already pointed out the fact that Mark Hamill is in the opening sequence. And they all seem happy to be there; it seems to me like there’s just a big party going on behind the scenes and King is hosting.

What a party it is. Sleepwalkers may be ridiculous, but that’s why I love it. I was in stitches for most of the movie, and I suspect that many of you who have seen it were as well. It’s stupid as all hell, but dammit, it’s fun.