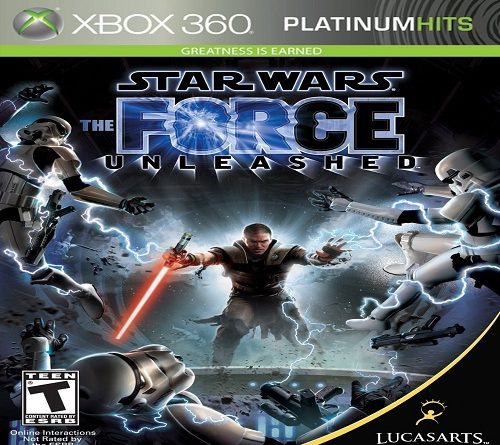 It’s been a number of years since the release of LucasArt’s The Force Unleashed, which gives the game just enough time to inspire nostalgia in some players. Me, on the other hand, have never played the game. But seeing as it was offered for free through Xbox Live’s marketplace in February, now seems like a good a time as ever to try it. Who doesn’t like free? Who doesn’t like Star Wars for free? Only someone that hates life.

Right out of the game the game starts you off as Darth Vader. You are tasked with going apeshit and destroying everything in sight. The character is extremely powerful, and there is an unmatched feeling of excitement as you plow through fields of Wookies (though I did feel bad killing so, so many of them). The force powers seem limitless; you can strange enemies, send them flying, or throw your lightsaber to decimate numerous foes in your path. This is a great way of setting the game up and keeping you interesting; you know you’re not going to be as powerful as Vader for probably a long time throughout the main game, but the taste of it is enough to keep you working to achieve that same level of power. 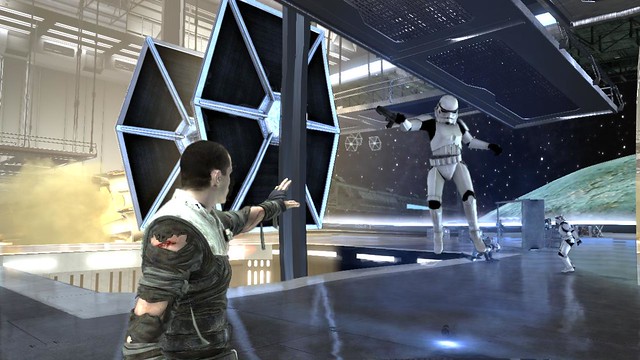 After the introductory level, The Force Unleashed begins your story as Starkiller, Vader’s secret apprentice. In an effort to hide your identity from the Emperor and usurp his throne, you will lay waste without prejudice to both imperial troops and the budding rebel alliance. Basically, the goal is to kill everything. It doesn’t matter. Even little cleaning droids. Why not?

The combat in this game is fantastic. At times it is cumbersome and a little hard to control, especially when you need to lock on to something, but it feels more like a learning curve than a mistake on the developer’s part. With a little practice, Starkillers moves are able to be mastered easily. Choosing which force upgrades you want to master instead of simply becoming all-powerful was a great move, as it gave the player some sort of decision making in a game where most of the decisions are made for you; kill this, kill that, don’t die. This is not an RPG in any sense.

Interacting with the environment, especially to use it to destroy your enemies, is just phenomenal. Here, you are able to literally pull TIE Fighters out of the sky and use them to kill enemies on the ground. If you’re in a space station and see a window, you have the option of smashing it open to let gravity do its thing to your enemies (why it doesn’t affect you in the process, I don’t know). A particularly fun aspect of The Force Unleashed is being able to pick up an enemy and kill him by launching him into another group of enemies, killing everyone and just generally being sadistic and insane. I may have a problem. But if I do, then so do many others; it’s one of the most fun things to do here.

The Force Unleashed has a fairly interesting story, and it bridges the gap between Episodes III and IV. If you know anything about Star Wars, though, you’ll know that this story is now more or less obsolete. It is not canon, and Rogue One tells the newly-accepted story of the origins of the Rebellion. Many fans may look at the game now as pointless in wake of recent events, but instead, I looked at it with earnest interest; a glimpse into a Universe that once meant something to a lot of people, now reduced to an alternate fictional story in an already fictional galaxy. It’s actually quite intriguing; to even suggest Star Wars isn’t real makes me feel like anyone who could say that is missing the point. But I digress; the story is pretty cool. End of convoluted discussion.

What I found to be unintentionally funny was the voice acting for many of the characters besides General Kota. Especially for those that have existed in Star Wars lore for years, the voice acting was exceptionally funny, most notable Princess Leia. However, Darth Vader’s voice was pretty much spot on. Starkiller’s voice? Eh – I don’t know what was going on what that. It is very dramatic and exaggerated, out of place and silly. To remedy this, I would turn the voice effects low in the settings and put the subtitles on. Then, I would blast the soundtrack and the sound effects, which were both outstanding. Especially when loud. Really loud.

The Force Unleashed, nearly ten years after its release, is a very solid game. Boss fights are fairly challenging, and chopping up hordes of stormtroopers is a dream come true for every fan. While it feels very much like a more primitive version of the vastly superior Shadow of Mordor, you’re not going to be able to wield force powers like this anywhere else. If you’ve always wanted to be a Jedi – or a Sith – here is your chance. Give it a try. It won’t change your life, but it’s a great way to live out your childhood fantasies of wielding the force.