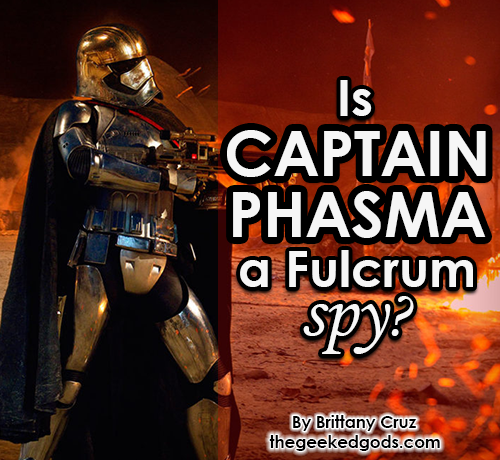 Introduced in “Star Wars: The Force Awakens” as the shining stormtrooper in chrome, Captain Phasma leads the First Order troops in their mission for dominance and control of the galaxy. But how loyal is she to the First Order? For someone in a respectable, high-ranking position for the evil-doers, she sure makes some monumental mistakes.

Under Phasma’s command, not only does Finn (designated FN-2187) break conditioning, but he also frees hot-shot Resistance pilot Poe Dameron, a valuable prisoner and personal thorn in the side of the First Order. Finn jumping ship is, no pun intended, a big deal. His departure puts the First Order at serious risk, not the least of which includes revealing weaknesses the Resistance can exploit like with the destruction of Starkiller Base.

Phasma’s dodgy track record is a little suspicious for someone who is meant to be an intimidating figurehead within the ranks of the First Order. It is unlikely higher-ups such as General Hux would accept anything less than perfect compliance and performance, so why does Phasma slip under the radar?

Perhaps her mistakes are not mistakes at all, but intentional.

It would not be the first time in “Star Wars” someone has spied on a group of galactic baddies by pretending to be loyal to their cause. Lando disguised himself as one of Jabba the Hutt’s pawns to try and rescue Han Solo from his carbonite prison, and Galen Erso built a weakness into the Death Star as an engineer for the Empire. 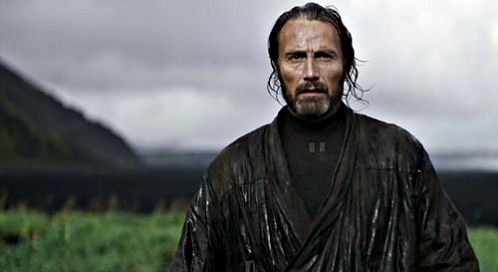 It is also not unprecedented for a once-faithful subordinate of the Dark Side to have a change of heart, as was the case with Imperial Agent Alexsandr Kallus from “Star Wars Rebels.” Originally a self-proclaimed enemy of the Ghost crew, Kallus defected and aligned his morals with the rebel cause after getting stranded on the moon of Bahryn with Zeb, the Rebel Alliance’s resident Lasat and personal muscle.

One way informants have aided rebellions in the past is going undercover and smuggling intel to their operatives. Started by Anakin Skywalker’s former Padawan, Ahsoka Tano, she created the codename Fulcrum as a means of anonymously delivering information to the Rebellion. Many people have assumed the title and responsibility of Fulcrum, including Agent Kallus and “Rogue One” intelligence officer Cassian Andor.

Is it possible Captain Phasma is the latest in a long history of Fulcrum spies?

Phasma spying for the Resistance would explain a lot. For one thing, the ease with which Finn escaped from the Finalizer with Poe could have been Phasma’s doing. Given that she keeps her troops on a tight leash, it is doubtful Finn released Poe from his torture room and sauntered right up to a TIE fighter without raising Phasma’s attention.

However, there is the issue of Han, Chewbacca and Finn holding Phasma at gunpoint. While Finn may be new to the Resistance, surely Han’s long history with Leia Organa — upgraded from princess to general — would have warranted a heads-up about any allies within the First Order. Why did Han not know about Phasma’s secret allegiance? The simple explanation is that no one knows.

Phasma working in secret would lessen the chances of her getting caught, and her rank gives her the perfect cover to access classified information. Being a spy would explain why she willingly took down the shields to the planetary superweapon because she never intended to stop its destruction in the first place.

A skilled fighter like her is hardly defenseless when someone points a blaster in her direction, no less a former cadet she had a hand in training. While it is plausible that she shut down the shields to save her own skin, that undermines her forward thinking as a strategist. Everything Phasma does is with purpose, and every decision she makes is with the bigger picture in mind.

The real question is what does she have to gain by letting the Resistance destroy Starkiller Base?

Delilah Dawson’s “Phasma” novel established that the chromed trooper is first and foremost a survivor. The harsh conditions of her homeworld planet Parnassos molded her into a hardened warrior. As a child, she arranged her parents’ deaths and crippled her brother to join a more powerful clan; this is one of many instances in which she demonstrates the lengths she will go to ensure her continued advancement.

Phasma is not just another brainless loyal goon of the First Order. As someone who puts her self-interest above all else, she could be aiding Resistance efforts with the mindset that the First Order is doomed to fail. If she is spying for the good guys, it is likely out of a selfish instinct of self-preservation rather than any moral obligation. She has no intentions of going down with a sinking ship.

Her “survival of the fittest” mentality is at the forefront of the four-issue Marvel miniseries “Journey to Star Wars: The Last Jedi — Captain Phasma.” Picking up at the destruction of Starkiller Base, it is apparent the trash compactor is the least of her problems. While removing evidence from the data computers that she was the one who lowered the planet’s shields, she discovers Lieutenant Sol Rivas already accessed the files. The situation quickly turns into a manhunt and ends with Phasma shooting Rivas down execution style. Cold, ruthless and efficient.

Phasma’s violent history means she is no stranger to death and destruction. That much is obvious when she orders, at Kylo Ren’s command, a squad of troops to open fire on innocent civilians at the beginning of “The Force Awakens.” Although Phasma gives the orders, it is worth noting that she and Finn were the only two troopers not to shoot anyone. This parallel may have more meaning behind it at second glance, seeing as Finn defects immediately after the Jakku mission.

Her odd behavior is also seen in events prior to the raid on Jakku in Marvel’s “Star Wars: Poe Dameron” comic series. Taking place before “The Force Awakens,” the story follows Poe’s mission to find the explorer Lor San Tekka, who is believed to have a map leading to Luke Skywalker. Much of the series revolves around Poe’s confrontations with his arch-nemesis, Terex, a First Order agent who always manages to be one step ahead of him.

At one point, Terex nearly tricks the rebel pilot into revealing the secret base of the Resistance. This is Phasma’s cue to step in via holomessage in an attempt to stop Terex from attacking the Resistance base. That’s right, an opportune moment to catch their enemies off-guard and she deters Terex’s armada. Seems a little suspicious for someone who supposedly sides with the First Order.

Her reasoning for ordering Terex to pull back — orders which he promptly ignores only to discover that Poe has figured out his scheme — is that Supreme Leader Snoke has forbidden any public aggressions against groups allied with the New Republic. She urges Terex that he “must not do this” and “the time is not yet right.” Frankly, that sounds like the words of someone desperately trying to buy some extra time for the Resistance to evacuate.

She warns Terex before he cuts off the transmission that there will be consequences if he disobeys direct orders. His response is the final nail in the coffin: “You threaten, and whine, and wail, but you never do anything.” 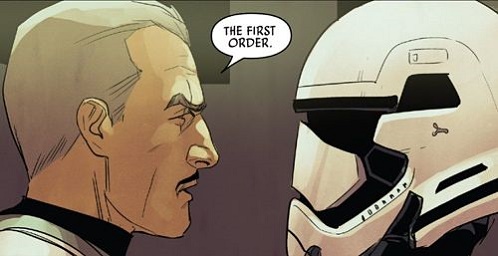 Originally a stormtrooper for the Empire, Terex discovers the existence of the First Order while leading a crime syndicate in “Star Wars: Poe Dameron” Issue 10.

That is not the only time Phasma intervenes with Terex’s plans. In “Star Wars: Poe Dameron” Issue 14, Terex acquires a data card containing highly sensitive information about the Resistance. What promises to be a breakthrough for the First Order is quite literally crushed to pieces when Phasma smashes the data card. She claims it underwent too much damage, rendering it useless. However, she was the only person who had access to the card before anyone else could inspect it. Red flag, anyone?

Phasma’s actions to this point have, in one way or another, benefitted the Resistance. Her part in the destruction of Starkiller Base to her attempts at thwarting Terex’s advances against Poe and Black Squadron all point to signs that the First Order may have a spy among its ranks. She is an expert at working any situation to her advantage and has no issue with throwing former allies under the bus, so perhaps the Resistance is receiving some unexpected help from the warrior-turned-trooper.

The possibility of Phasma being a spy and stepping into the role of Fulcrum has the potential to change the narrative of the sequel trilogy. If she secretly is Fulcrum, that does not necessarily mean she supports the Resistance; she is likely just using them as a means to an end for her own purposes. For now, Phasma’s current allegiances should be taken with a grain of salt. 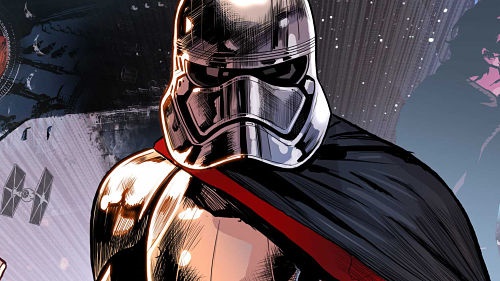 Do you think Captain Phasma could be a Resistance spy? Share your theories down below in the comments!