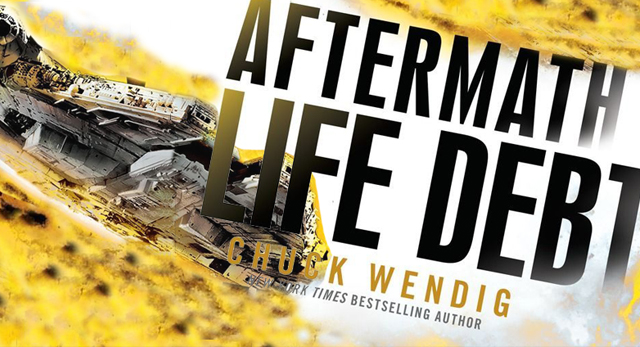 War is brutal. People are slaughtered for no reason, homes are destroyed, and lives are thrown irreparably into chaos. Traditionally Star Wars has adamantly avoided the very real, very human impact of war, instead focusing on the acts of loveable super-powered heroes who always seem to find a way to beat the bad guys and save the galaxy. Life Debt, book two in the Aftermath Trilogy explores the impact that a galactic civil war would have on the people of a galaxy far, far away and it’s not pretty.

Anybody who read the original Aftermath novel should instantly recognize author Chuck Wendig’s distinctive writing style. It is fast pace and energetic in a way that stands out when compared to other Star Wars novels. The style had the potential backfire. Fortunately, this story is packed with interesting, well-written characters. Every character is instantly engaging whether its Sloan trying to unravel a massive conspiracy while making herself appear in control or Nora trying to make up for not being a better mother to Temmin; every exchange see’s the characters grow in new and interesting ways. Regarding overall narrative, there are a few major moments, but this is really a tale about disparate characters trying to work together as a team and learning to deal with each other’s idiosyncrasies. Sloan’s side story is interesting, but ultimately it won’t amount to anything until we finally get the final book, early next year. Like the original book, the best parts of Life Debt are the interlude chapters. Each interlude is a short unconnected story that shows what life in the galaxy is like now that the Empire has fallen, they offer unique perspectives on how the Rebellion has affected beings everywhere, and it’s not always for the best.

The books biggest strength is how it manages to tie itself to other existing cannon properties. Fans of the expanded universe are in for a treat especially anybody who has read the various comic miniseries that Marvel has released over the last few year (most of which come highly recommended.) Minor characters from the books and films also get opportunities to shine, if you ever wondered what Mon Mothma or Mas Amedda have been up to, you’ll get to spend some time with both of them in Life Debt along with a host of others including Rae Sloan who we’ve now had a chance to see at pretty much every stage of her career in the Empire (and the years have not been kind to her.) Just don’t go in expecting any big reveals for Episode VIII, some tiny crumbs a left for readers to ponder but you won’t be finding out Rey’s last name anytime soon.

Star Wars Aftermath: Life Debt is an interesting piece of Star Wars lore; it inches the Galaxy forward ever so slightly while essentially telling its own self-contained story. This is definitely a Star Wars book aimed at adults featuring torture, sex, and mutilation which feels strange in Star Wars but oddly fitting in the story that is being told. Overall, it’s a fun read but not necessarily for everyone. Fans who want to see a darker perspective on the galaxy should jump right in but those looking for a more lighthearted affair with Han, Luke, and Leia may wish to look elsewhere. I for one can’t wait to find out how this story concludes in Empires End.