Welcome we are here to talk about the series Saints Issues 1-3 have been released issue 4 will be coming out January 6th. Saints was created by Ben Mackey... 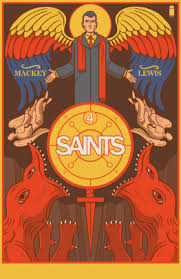 how would you both describe Saints to someone who has never read it?

It’s a fun and wild look at a group of people thrown together by fate. If you weren’t a religious person, say you were a roadie for a death metal band, and suddenly you were recruited into a Holy War how would you react? The book is funny but can also shift to serious subject matter on a dime. I like that books that are alive and crazy but are grounded by consequence. You can’t get away with anything. What you do does cause other things to happen, it can cost you loss. It’s also very funny. 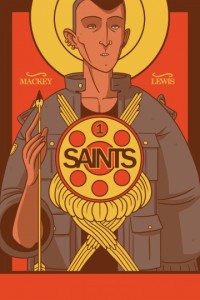 Ben and i were painting a set for a theater production and I asked him one day- “hey have you ever thought of drawing a comic?” And he said “I have this weird idea- like, what if the Saints came back and the way they’d been killed became their superpower.” I was in. I went to Catholic School, I have a grandma who is beyond old school (as well as her son an atheist) so I felt connected before I even wrote a page.

Ben and I would then meet for coffee. He had done a few character designs and I added Blaise to the mix. We then hashed out the way the series would play out.

I then went off and wrote short stories for each issue. Once we had those Ben drew the work. It’s been a good collaboration. 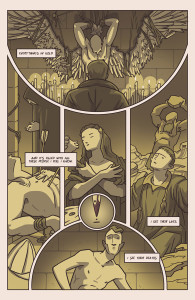 The saints mix of modern beliefs with Christian tenets, what religious research was done to develop the characters?

Really, it’s all first hand. Ben and I are both pretty well versed. he has an inordinate obsession and knowledge of the stories of the Saints. I went to Catholic school and grew up with it in the house. I also was particularly obsessed with Revelations as a kid. So the book leans on that book especially. I also drew from Leviticus and Genesis. Some of Matthew as well.

It brings up conflict. Most of my writing comes from personal conflict. Things I am unsure of my position on. Religion even at this stage is that. I was raised with a definitive concept of God, one I have accepted and rejected throughout different periods of my life.  I have been basically atheist and devout at different junctures. Even now when I fly, I pray, which must be so condescending for God (like “oh now you show up?”).

The design of the world always makes me think that there must be something more but then I doubt that just as often. But belief is like that- I mean you can believe in science but science is based in it disproving itself. A theory exists until a better theory comes along and hopefully with each one we get closer tot he truth.

I’m still searching for that truth, myself.

It seems the saints will be following Gabriel and going against Michael and the prophets of Michael, what can you tell us about Gabriel and Michael and how God is in the middle of their conflict?

God, for reasons not know just yet, has basically disappeared. Walked away form this mess, if you will. Michael- is a soldier- he was trained solely to kill and specifically to kill for the favor of God. What does that mean when God leaves? It means he gives himself a mission. One that will get God’s attention, one way or another. Gabriel is the messenger of God. And so he passes on his last few assignments, “you’re a Saint, you must go here, you must do this,” he is helping to fulfill the Lord’s final wishes, setting up an army to off set Michael. A battle that will stand in as the day of reckoning.

In other interviews you’ve both talked about collaborating on plays how has this process differed from the other projects you have worked on? How has your relationship with each other evolved with this project? 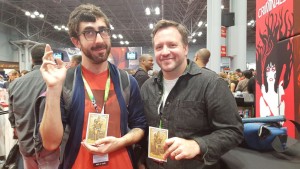 Well, we’ve become more of friends and confidantes. In the theater I am often the director, so the over all vision for a show is coming form me. When I have Ben do work for me it’s on a per hire basis, so he really isn’t informing story as much as fulfilling visual needs for the story.

On the book it’s a true partnership, we give each other notes, we push each other, we throw out ideas in each others’ discipline in the hopes to make the book as good as it can be.

How is scripting a comic story different from scripting a screenplay? What is your method for scripting, how did you develop the process?

There is less physical space. I have 32 pages to craft a full experience. So it demands an efficiency like that of a poem. Every word becomes important. I go through multiple drafts. Typically, i will do a beat by beat outline: something that goes “SAINT HITS THE GUY, GUY FALLS, SAINT RUNS, etc”. Really broad and basic. It’s the over all idea of ACTION for the story. Then I go back and fill that out, I start to write dialogue and create the secondary stories.

By the third pass it starts to look like something between a play and a short story. This is usually what BEN is given.

What advice if any would you give comic book writers and artists about pursing comics?

Do it. Make your own stuff. Find an artist. We sent a full finished issue to Image. I wanted to show that we could create an entire book and I wanted to really give the full experience of what the book could be. It’s a lot of work but the thing is, keeping a monthly schedule is a lot of work, hitting deadlines… this is a business, you need to show that you’re a good investment.

Issue #4 of Saints comes out Via Image on January 6th. What can the readers look forward to?

A lot of humor in the way of a surprise demon and back story on the Prophets. In this issue Michael’s plans for what he is building begins to be unleashed.

Is anything else that you all would like to tell the readers about? Where can they follow you?

Again Saints #4 comes out via Image Comics on January 6th, pick up the series well written, filled with religious doctrines mixed with humor and the art work is unique and spectacular.

Go Pick up this book and issues 1-3