Photo of Warren Ellis by Ellen J Rogers, Check out her Website here  Welcome we are here to talk about the series Injection Issues 1-5 have been released via... 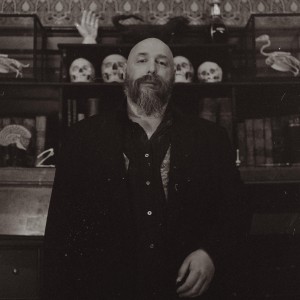 Photo of Warren Ellis by Ellen J Rogers, Check out her Website here

Welcome we are here to talk about the series Injection Issues 1-5 have been released via Image Comics and Issue 6 will be coming out January 13th. Injection comes from the team of Writer-Warren Ellis, Artist Declan Shalvey with Color from Jordie Bellaire. The Geeked Gods got the chance to interview Warren Ellis about Injection. The next chapter in the series, Issue #6 comes out on January 13th from Image… 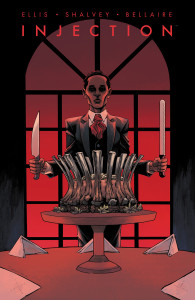 Thank you for speaking to the Geeked Gods, how would you both describe Injection for our readers?

Once upon a time there were five crazy people and they poisoned the 21st Century.  Five actual geniuses, faced with the idea that innovation would slow down and the future would be boring, created an alien artificial intelligence in order to make the 21st Century better and stranger.  It got out, got loose into the fabric of the 21st Century, whatever it was, and now shit is getting weird and ugly, faster and faster.  And they’re trying to deal with it.  It’s not working out for them too well so far.

It was a combination of wanting to come up with something interesting enough that Dec and Jordie would want to make the art for it, and my wanting to kind of draw a circle around all the things I’ve been talking about at digital, futurist, philosophical and literary events over the last few years — folklore and technology, the approaching future and deep time.  And framing that in what are, to me, story elements and structures that are peculiar to the British Isles.

You’ve said in other interviews that Science fiction these days is being written by science, do you think that Injection could happen in the real world and that we could be head towards an Injection type Event?

Not for a very, very long time.  General strong artificial intelligence is a fictional bogeyman.  I did a talk about this with Sir Roger Penrose and Nigel Shadbolt earlier in 2015, and was surprised to discover that we all agreed that, really, it’s not on the cards.  Also I cheated by having a wizard put something into the code.,

Issue #6 of Injection comes out Via Image Comics on January 13th. What can the readers look forward to?

It’s the first part of Volume 2, which means we shift our focus to Vivek Headland, Anglo-Indian consulting detective, living in New York and taking on a case involving money, ghosts, sex and the correct kitchen preparation of human meat.  INJECTION is conceived of as five five-chapter volumes, so this is a fresh start, and, honestly, I think any reader could come in at issue 6 and come away with an “issue one”-like reading experience.  And it was a lot of fun to write.  Probably more gags in issue 6 than in the last five issues combined.

So Pick up Injection #6 out January 13th the continuation of this excellent series and if you haven’t, pick up the TPB Vol 1.