We are here to talk about the Series Code Name Baboushka from Writer Antony Johnston with Art from Shari Chankhamma. On March 9, 2016, Code Name Baboushka, The Conclave of Death Issue #5 comes out via Image Comics. The Geeked Gods got the chance to talk to Antony Johnston and Shari Chankhamma about this issue:  The next issue #5 arrives on March 9th, 2016 and is said to be concluding the first chapter of the series. 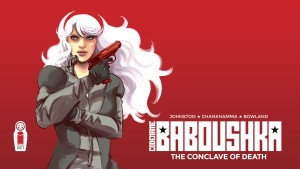 So let’s talk about Code Name Baboushka, how would you describe the series?

AJ: CODENAME BABOUSHKA is an action-packed modern pulp spy thriller, full of high stakes thrills in exotic locations, with a kick-ass female hero in the style of James Bond and Modesty Blaise.

It stars the mysterious “Baboushka” herself, an enigmatic and wealthy noble socialite, who’s the last heiress to a noble Russian line — but secretly also a deadly assassin! Baboushka and her compatriot Gyrorgy are blackmailed out of hiding by the US government, and forced to carry out dirty jobs even the CIA can’t sanction. 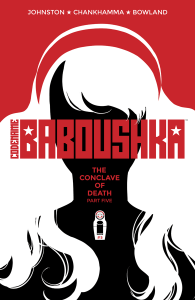 What was the inspiration for the story, how did you develop the series?

AJ: I was watching FROM RUSSIA WITH LOVE, one of my favourite Bond movies, and suddenly thought; I’d love to see a version of this from Tatiana Romanova’s point of view. How much does she know, anyway? Can we really trust anything she says?

That got me thinking about female spies, female action leads, and the historical characters like Modesty Blaise and Mrs Peel that I already mentioned.They were groundbreaking characters in their time, and it’s pretty shameful that 50 years — half a century! — later, female action characters like them are *still* regarded as unusual and innovative.

There’s also a serious dearth of leading female action characters in comics, outside the superhero universes. It’s only really in the last several years that a few creators, many of whom I’m proud to count amongst my friends, have begun to redress that balance. We’re still nowhere near any kind of equilibrium.

I wanted to create a character who could be that leading female action hero, a fighter and survivor who was in charge of her own destiny. A character that could endure, and find herself in any number of stories and adventures. Someone with an iconic look, an interesting and shady history… and a very bad attitude.Baboushka was born.

Shari approached me after we’d been working on THE FUSE together for a while. People already know she’s an amazing colourist, but not many people know she’s also an awesome artist. So when I saw her work I realized she’d be a great fit for the glamorous, sexy world of Codename Baboushka. 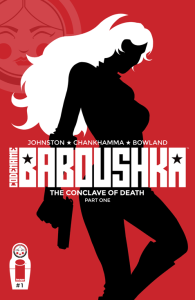 The Artwork brings to life espionage/spy novel with every issue, what is the inspiration for this world? How is that collaboration done between you both to bring this world to life?

As for collaboration, I’m fairly old fashioned — I write a script, and let Shari take care of the visuals. I trust her to make the book bright, fun, and glamorous. Of course I look over the pages and give feedback on them, but I’m not an artist.

SC: Antony has certain ideas of how he wants a scene or character to look, but he also allows a lot of liberties. I love that. His scripts are detailed where it needs to be yet left vague enough for me to run with it. For example, in some issues characters may only appear for a couple of panels, so not much is said about them, but I had fun designing them and in all their different spiffy suits, sometimes making up little back stories for them in my head.

How did you come up with the design for Contessa, is she based on someone? 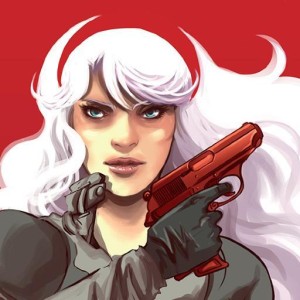 AJ: No. I wanted a hero who would be visually striking, with a look that we could boil down to an icon — hence the “target” icon we use throughout the book — but also easy to cosplay. Anyone wearing a red headband over a white wig would be instantly recognizable as Baboushka, so I think we achieved that.

The Contessa’s dresses are all down to Shari, who loves designing clothing, and the combat outfit is just a practical suit, again designed by Shari. I chose Baboushka’s weapons, though.

SC: After I read the script, my mind suddenly went back to one manga in my childhood called POINT-D. That’s kind of how I begin to see Contessa, kind of a classic pulp spy novel woman who can be physically strong but isn’t afraid to be sexy, beautiful, and also cold.

You both have collaborated on projects before Code Name Baboushka (The Fuse) how has this process differed from the other projects you have done, have you learned anything new about each other because of this project? How has your relationship evolved with this project?

AJ: Although we worked together on THE FUSE, on that book Shari is colouring over Justin Greenwood’s inks, so the work and relationship are quite different. This is the first time Shari has drawn a book I’ve written, so naturally we’ve gotten to know one another a lot better while working on it, but I think the only real evolution is that we’re closer friends now than before. It’s all good.

SC: Collaborating with a writer you’ve never worked with before can be difficult. There’s a lot you don’t know about the other person’s process and expectations. Working with Antony on THE FUSE helped a lot, because I felt more comfortable with the whole process. I feel very lucky that we get along very well. Plus, we have met in person! That’s rare for me.

SC: I’ve worked on quite a few work for hire projects in my career, and I always maintain the same level of care in all my works. But work for hire tends to slip out of my head once done and wrapped up. I’d say I’m more emotionally invested in creator owned projects though, and I think about them longer. How are they doing? What do people think?

What one piece of advice would you give comic book writers and artists about pursuing Creator owner books?

AJ: Don’t tell stories you’re not interested in, just because you think it’s what people want to read. All the great successes in creator-owned comics have been because creators are telling stories that fascinate them, regardless of how ‘commercial’ those stories might be.

SC: You just have to go for it. But it’s a balance between realistic expectations and pursuing your dreams. Your first work probably won’t be a big hit. Or your second. Or third. Most creators have many, many works under their belts before you start hearing about them. Don’t get discouraged, and learn from each experience.

What can the readers look forward to with Issue #5? Future of the series? 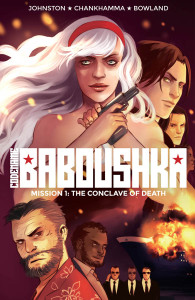 AJ: Issue #5 is the final part of CODENAME BABOUSHKA: THE CONCLAVE OF DEATH, which is Baboushka’s first mission. It’s the climax of the action, and everything explodes — or at least, it will if the Contessa can’t stop it!

As for the future — Baboushka will be forever changed after the end of this mission, and we can look forward to many more missions, guns, high kicks, and deep-rooted secrets to come.

SC: More actions, more intrigues, and more explosions. At least that’s what I hope for.

Is there anything else you would like to tell the readers and where readers can find your work and where can people get in touch with both of you?

AJ: My website is antonyjohnston.com, and contains full details on all of my work, as well as articles and resources for aspiring writers, and links to my social media accounts. I’m @antonyjohnston on twitter.

Dont forget to pick up Issue #5 out March 9th at your local LCS or wherever you pick up new comics.

Check out our newest poster