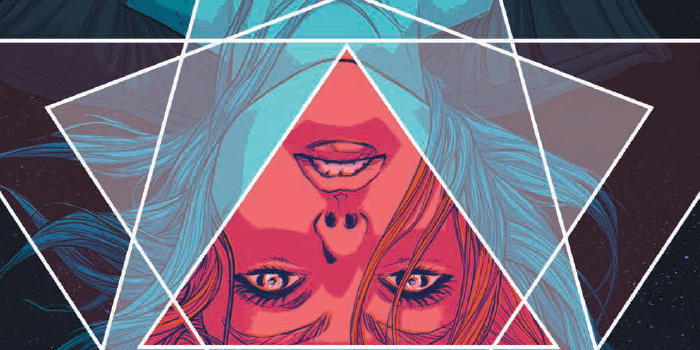 Becky Cloonan’s first arc of Southern Cross is definitely an interesting ride – in more ways than one.

Step inside the world of Alex Braith, a spaceship on course for the refinery moon of Titan. Braith is onboard to collect the remains of her late sister who perished on Titan and also find out what really happened to her. What was the real cause of her death? Murder? And if so, who are the ones responsible? The first volume chronicles Braith’s time spent on The Southern Cross, which is high in mystery and yet very low on answers.

In this age of post-Star Wars and Alien science fiction, it’s really hard to write something that isn’t following in their footsteps. Combine elements of those two, and couple it with the galactic horror of Event Horizon and the visual psychedelics of 2001: A Space Oddysey, throw in a classic murder mystery plot, and the result will be Southern Cross. While it’d be easy to call it a ripoff, that’d be an uninformed and slanderous statement – the series definitely is an homage to the great science fiction films of the past. Everything from the intricate design of the ship itself to the outfits the crew wears seem to be screaming artist Andy Belanger love for these films from every panel.

And speaking of the panels, the layout of some of these pages is nothing short of jaw-dropping. There are multiple full or two page spreads throughout our time spent in The Southern Cross that, mixed with Lee Loughridge’s fantastic coloring, are awe-inspiring. Southern Cross gives the reader the full space voyage experience in a comic book format with all the grandiosity of seeing a space freighter fly overhead – only this time, it’s in a tiny little comic book instead of a silver screen.

From a story point of view, it’s not exactly the page-turner one would expect from a mystery horror tale. It burns a little slow, but if that’s your type of thing, you’ll absolutely love it. The character development outside of Alex is somewhat nonexistent, which is something I would have loved to see – but then again, this story is about Alex. The characters besides her are secondary, and Southern Cross makes that point abundantly clear.

Don’t mince my words, though; the story is not boring, and the characters are not poorly written. It’s unique. The mystery contained in these pages is compelling, but the art almost completely overshadows the story. The panels are drawn in a way that really conveys the complexities in the ship, showing the logical paths in which the characters walk down hallways and down ladders in ways which is not often seen in comic book artistry. The characters aren’t the most realistic, but it works; you’re completely aware that you’re reading a comic, but it’s nothing to cry over. Instead, it’s absolutely a celebration of the comic book format. It’s fun, yet scary. It’s spooky, but it never gets overbearing.

At the end of the arc, there are still many, many answer to be had. Without spoiling anything, it felt a bit lacking in resolution…but I’m sure these questions will be sorted out in further volumes. Regardless, if the art keeps up in this fashion, I’m sure the second volume will be just as dazzling and fantastic as the first.

All Images from Becky Cloonan and Andy Belanger