Some Strings Attached: Puppets on TV By Sheila O’Neill The Muppets are returning to television this fall and I, for one, am very excited about it. Puppets don’t always...

The Muppets are returning to television this fall and I, for one, am very excited about it. Puppets don’t always get enough screen time but when they do, they make TV awesome for kids & adults alike. 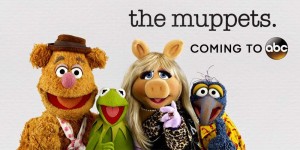 Since the 1950’s, when TV audiences fell in love with Howdy Doody, puppets have been a big presence on the small screen. This is due, in large part, to the innovation and imagination of the late, great Jim Henson.  With shows like The Muppet Show, Sesame Street, Fraggle Rock, and Dinosaurs, among others, he’s made childhood great for generations of kids. These puppets were well-designed and brought to life by masterful puppeteers so that they each had a distinct look and personality. To this day, children respond well to the bright colors and friendly faces of Jim Henson’s creations.

But, as Being John Malkovich taught us all too well, not all puppets are for kids. The first ten episodes of Saturday Night Live featured a recurring sketch involving Jim Henson Muppets called “Dregs and Vestiges”. The upcoming Muppets show is also aimed at an adult audience. And several shows directed at older viewers that don’t have any puppets in their main cast have had special episodes featuring puppets. 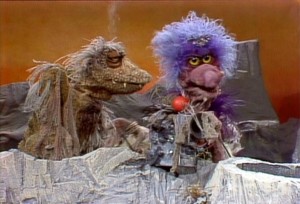 In Ben Edlund’s excellent Angel episode “Smile Time,” a group of evil puppets use their TV show to suck the life force from children. In the course of investigating the situation, Angel himself is transformed into a puppet, a situation which Edlund uses to hilarious effect throughout the episode. 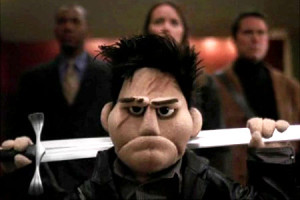 Although it’s only a small part of the episode, the use of puppets in 30 Rock’s “Apollo, Apollo” is brilliant. The puppets are used to show what the world looks like through Kenneth’s eyes. Apparently, that world is full of puppets. The episode shows us puppet versions of Jack, Liz, and Tracy and even breaks into song for a moment.

Finally, we come to “Intro to Felt Surrogacy,” the puppet episode of Community, which uses a session of group puppet therapy coupled with flashbacks to tell a story using two levels of puppets. The puppets in the “real world” of the episode have been created by the Dean and are simple and a little raggedy while the puppets in the flashback are professional, Muppet-style creations. One of the best jokes in the episode goes puppet-meta when the flashback puppet version Chang is seen using his puppet-therapy puppet.

From Kulka, Fran, & Ollie to ALF, puppets have been on TV for a while now and it looks like they’re going to continue to pop up on the telly for the foreseeable future. The fuzzy creatures may evoke memories of childhood, but that doesn’t mean we have to outgrow them. We can only hope that they will continue to be used in clever, innovative ways, and keep bringing special, heart-felt performances into our lives. 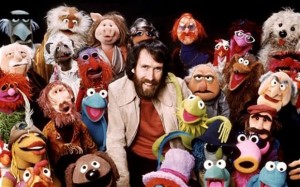 The Geeked God Podcast-Guess the Creep