Skyrim Might Have Ruined My Life Forever…and That’s Okay I will never forget the first time that I booted up Skyrim on my Xbox 360. It was Christmas... 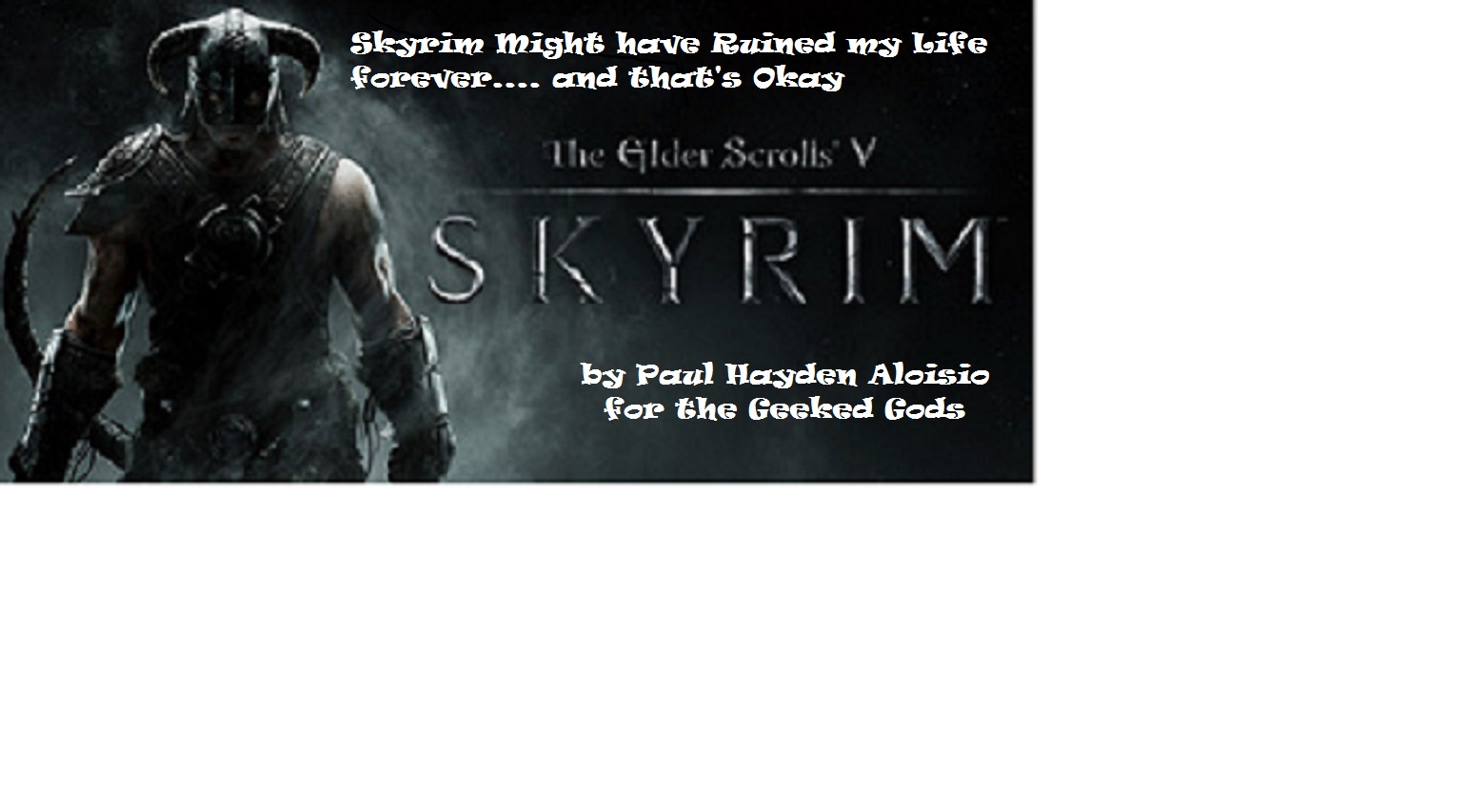 Skyrim Might Have Ruined My Life Forever…and That’s Okay

I will never forget the first time that I booted up Skyrim on my Xbox 360. It was Christmas day, and I had just received a brand new black console from my mother along with one game: Skyrim. Truthfully, it was the only game that I really wanted for the system and was the sole reason for wanting the system itself. Not for the media experience that the new Xbox was promising, and definitely not for the Kinect. It was for one noble cause…to fight for the future of Skyrim alongside my fellow nord.

So, I came home from my mother’s house Christmas morning and stopped by my own home to get ready to go to my Grandmothers for Christmas dinner. That’s always been the tradition, and it hopefully always will be. I went home to get a change of clothes…but I couldn’t do only that. The dragon emblem on the game’s box was glaring at me. It was screaming at me, almost. “Play me! Play me!” It was begging for me to experience it, and who was I to deny a lonely little Xbox game its one Christmas wish? I decided that dinner would have to wait.

I was three hours late for dinner that year. Oops. 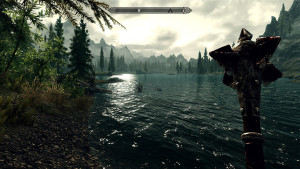 I will never forget the first opening tones of the soundtrack. The second the Dragonborn emblem showed up on the screen, I was in awe. I could not have imagined it looking any cooler. And then, the game actually started. On my way to my “execution,” looking around at the world I was so eager to explore was truly breathtaking. The way it let the story sort of set itself up before forcing you to create a character was something truly interesting to me, and it definitely helped me decide what my character would look like due to the information I was gathering from the other men being carted off to die. My nord, bearded as all hell and built like a tank, was ready to take on the world of Skyrim. Then, the dragon attack. It looked beautiful; the attention to detail was gorgeous, despite it not being the crispest game in the world. There is a definite feel to the game, one that is incredibly unique; dirty, yet refined…if that makes any sense at all.

After the dragon attack was over and I was off to explore the world, I stopped playing because it was really getting late and really needed to haul ass to my Grandma’s. Throughout dinner, however, there was only one thing on my mind. The game. I couldn’t wait to get home and get to know the game’s inner mechanics. How powerful could I make my character? Was he going to be a battlemage, or maybe just wield heavy weapons? Would I play as a hero or Skyrim’s worst villain? The idea that I was about to craft a story for a character that I helped create, given the tools that were available to me, was incredibly intriguing. I’m no spring chicken when it comes to RPGs either, so don’t mistake my excitement for me being naïve; I had just never been so enthralled with a game like this before. Baldur’s Gate was great, as was Neverwinter Nights, and I’ve already expressed my love for Fallout in a previous article, but there was truly something different about this game…something that no game has been able to do for me since. 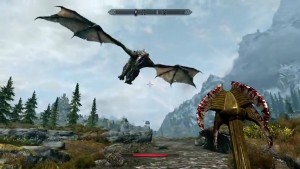 This, my friends, is why I say Skyrim has truly ruined my life. All games outside of Skyrim have been good, with BUTS. “This game is good, BUT….” “I really liked this part of this game, BUT…” Every game after this will always be judged by Skyrim standards.

In Skyrim, there were never any thoughts like that. It was perfect. With all of its quirky flaws, it was undeniably perfect for me. The glorious soundtrack literally made me feel like I was born to kill Draugr and slay dragons. The environment was gorgeous, with its snowy mountains, flowing rivers, and even Solstheim’s ash monster-lined shores. The voiceovers, though many of them repeat themselves (many of them), just sound so fitting. No one ever sounded out of place to me, regardless of the fact that 600 guards all managed to have the same exact voice. I especially loved the grim-faced humor and the hundreds upon hundreds of Easter eggs in the game.

I loved how interactive everything in the game was. The fact that you could just pick up bread and plates, forks and knives, and everything in between was a great testament to just how far Bethesda went into putting detail in the game. Of course, even though most of these things were pointless, being able to pick up books and read anything you can get your hands on was an impressive touch. It helped me, one who had never played Oblivion before in his entire life, get completely immersed in the lore of Tamriel and everything that goes along with it. I went from wondering what the hell and Argonian was to knowing not only where they hail from, but their drugs of choice. Obviously, if you’ve played the game before you know that as well, but you get what I’m saying. The amounts of knowledge about this fictional world that I’ve fallen so hard in love with is endless. 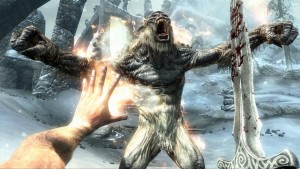 Even the sometimes clunky game mechanics were awesome to me. It’s still beyond hilarious to be swat into nearly outer space because of a giant’s club, or flailing from an insane height while falling off of a mountain and then landing with your legs where your ass should be and your legs in front of your chest. The fact that you end up like that whether you fall off of a mountain or get hit with an arrow is even better. Still, as funny as they are, those little things never took away from the immersive experience for me. They enhanced the game and I quickly learned to love every time I found a new and hysterical new way for it to glitch out and go insane. There were many times when I’d try and make the game do ridiculous things on purpose, just to see how far I could take it.

After playing the game for a while, you really could feel like you had lived in Skyrim. You could feel like you were a member of the Stormcloaks or Imperials. You learned to deal with trolls the right way, and you knew all of the best routes to the caverns with the best loot. The storyline never felt forced; it felt like it was told the way it was meant to be. At the end of the game I felt an insatiable desire for more. After hours upon hours, I couldn’t believe that I still wanted more…but I did. So I committed myself to doing every possible thing that I could in the game. And I did. Twice. Three times. Maybe four. 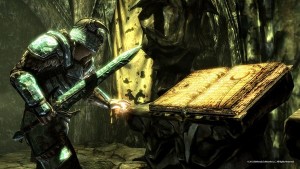 Skyrim and all of its DLCs captivated me in a way that no other game has been able to. Since my initial playthrough of the game, I have since played all of the next-gen Fallout games (next-gen at the time of them being released and next-gen right now with the 4) and even Oblivion. I loved them all and I’ve played them all numerous times, especially New Vegas. Bethesda has become my favorite developer, and anything they put out I’ve got to get my hands on. Still, nothing has been able to top this one. Even with my love of Ocarina of Time, I never truly felt like I was part of the game. I was simply watching a story unfold before my eyes. In Skyrim, I was the writer of the story…and I wrote a damn good one, at that. More times than I should admit to anyone.