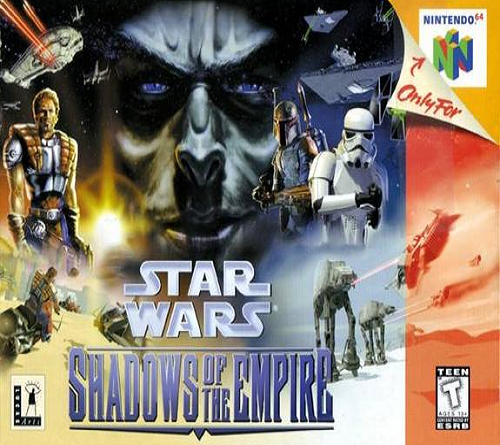 The Nintendo 64 had so many memorable games, and whether that’s because they were actually good games or because they now hold a powerful nostalgia over us is irrelevant. We could choose to look back and review the technical or gameplay aspects of them, but really, I find that a bit pointless sometimes. There are some games that are special just because they were fun and were able to consume you for at least a short period. And shortly after the N64’s release, Shadows of the Empire was able to do just that for me.

In 1996, a media onslaught of all things Star Wars was unleashed. Shadows of the Empire was a multimedia experience, spanning from games, to novels, to comics, to cards, to – of course – action figures. Put together, these pieces served to tell an immersive story focusing on mercenary Dash Rendar, a Han Solo-like badass. But for my budding mind, just the video game was enough. Well, I needed the toys, too. Come on. Let’s be realistic here.

The game, which opens up with possibly the best attack on Hoth sequence in a game ever made, takes place between The Empire Strikes Back and Return of the Jedi. The play takes on the role of Rendar as you attempt to first track down Han Solo’s frozen body and ultimately defeat an enemy named Xizor, whose goal is to murder Luke. Throughout this quest, you are accompanied by no one besides your droid Leebo, while flying through space in their ship called the Outrider.

Curiously enough, the story is told through SNES-reminiscent text and picture frames, and for a young mind such as myself at the time, does not do much to hold one’s attention. There’s simply too much going on to be flashing back to nothing but text! I would think that’s a reasonable statement, given the fact that the game spends so much time dazzling the player with space battles, iconic enemies (Hello, Boba Fett! Hey, IG-88!), speeder races, and terrifying Wampas chasing you through snowy, desolate hallways on Hoth.

Still, the character of Rendar has something highly compelling about him. Maybe it’s the mystery of his existence – it would seem that there is so much more to the character, yet we only see him during the events of Shadows of the Empire. He makes his appearance and then quickly vanishes, adding to the intrigue like so many other legendary players in the Star Wars Universe. After all, just how much screentime was really ever given to Boba Fett?

Regarding gameplay, this is no walk in the park. The controls were constantly aggravating. Aiming was damn near impossible, and the analog stick made it super hard for one even to remain walking in a straight line. I remember finding myself dead constantly due to the lack of any fluid control of the main character. At the same time, this made for a real challenge, which I welcomed. I’m positive it was not intended to be that way, and many will see this as a design flaw. But as a child who just wanted to be good at everything, this provided me with the difficulty that I needed to hold my attention.

The amount of gadgets that you can harness made for very varied gameplay. Snowspeeders? Check. Flamethrower? Got it. Jetpack? You bet. For the time, this equated to an excellent amount of variety to keep the game interesting for its ten levels of galactic heroism.

But possibly my favorite part of Shadows of the Empire is the dark atmosphere. Compared to other games available on the console at the time, there was a seedy, ominous atmosphere about the whole experience. Mario wouldn’t dare step foot in the dank, putrid sewer systems that Dash Rendar has to swim through. Quite frankly, there were a lot of very scary sequences. It’s not a horror game in any sense, but enemies would jump out from seemingly nowhere, and hearing a Cliff Wampa start screaming and chasing after you in the Gall Spaceport level is enough to make you wet yourself. Not like I did that or anything. Maybe a little. Look, I was young.

Beating the game on a lower difficulty leaves one with a bittersweet feeling. To add to the darkness of the game, it isn’t revealed that Dash ever makes it out alive unless it’s beaten on a higher difficulty. And even then, the hero is doomed to wander space with the whole rebellion thinking he made a martyr of himself. There’s just a sad feeling about this character. Because of this, the game was able to pull at your emotions – even if most of the story was told through text cutscenes.

It’s more than just a little bit amusing to go back and read a review from when Shadows of the Empire was first released. In a review published by IGN on December 6th, 1996, it was summed up as being “Mediocrity wrapped in a Star Wars package.” The game earned a total score of only 6.5, stating that the controls were too haphazardly to truly enjoy the game. A separate review from Gamespot earned a similar score but noted that the game had “outstanding graphics,” which shows just how far we have come in the gaming world in the twenty years since its release.

If I were an adult in 1996, I most likely would have given the game a similar review. I can see their points clearly, and I do understand how the controls could hinder your experience while playing the game. But this is where nostalgia comes in handy. Instead of viewing Dash’s Big Adventure as nothing more than mediocre, to me, it is a powerful piece of Star Wars history that I choose to cherish and celebrate. The enjoyment that I felt playing this game as a kid is burned into my brain. It holds memories of pure excitement and awe.

And isn’t that really what we all love so much about Star Wars, anyway?

Women of ‘Star Wars’: The impact of Leia, Padme and Rey