Rocket League made its debut two years ago in July 2015 and has remained popular ever since, even increasing in popularity. There are a lot of factors that go...
by Madison Worm April 27, 2017

Rocket League made its debut two years ago in July 2015 and has remained popular ever since, even increasing in popularity. There are a lot of factors that go into why this game is so popular, and I’m going to dive into them today.

One reason for Rocket League’s lasting success is that it is simple. The concept of the game is truly simple; you are a car with a rocket attempting to hit a large ball into your opponent’s goal. One player by the name of Kralizeccz states, “It’s the most footbally game on the market. You actually feel like you’re playing football (with rocket powered cars) instead of just pushing buttons to shoot or pass. It’s precise and skill based and most of all, it’s just fun as hell,” which brings us to reason ‘one and a half’ for its popularity. One user, Xibalbor, said, “it is easy to learn and hard to master.” Even if you join the party late, and all your friends are legends in-game, and you’re a rookie, you will still have fun while you rank up and learn the game.

The team size seems to be one reason for enjoyment of the game, though there are some who would like the team sizes to be bigger. Rocket League isn’t the first, nor will it be the last to have a max team size of four players. The team size works well for the map sizes, not to mention how chaotic the game can become with four players, there is no need to increase that number. The number of people per team can also be customized. You can do three players as well as two players and one on one gameplay. There are also options for solo play in

which you can play a season, or create a solo match against AI teams with AI teammates, and you can add friends to your team if you so desire. Local split screen is the only multiplayer that can be used for ‘Seasons’ if you wish to play with friends.

Remember earlier when I said things can get chaotic enough with four players? This is a huge reason I said that. Game mode is a big reason why the game is so fun, and this free DLC is a major part of that. While regular game modes include Online Multiplayer, Exhibition, and Season, Rumble adds a whole new layer. With Rumble comes powerups, and with powerups comes great responsibility… or blissful disorder. Every ten seconds the game gives you a new powerup. These powerups will help you by kicking, punching grabbing and sticking. 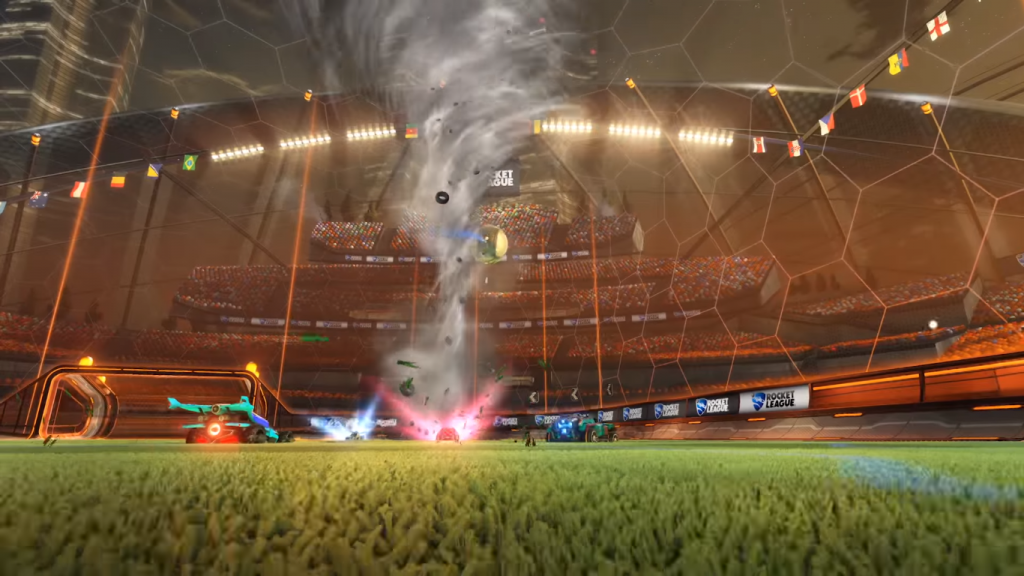 Grappling Hook: Pulls you towards the ball

Magnetizer: Attracts the ball to your car

Powerhitter: Your hits increase in power

Spike: Causes ball to stick to your car on impact

Swapper: Swap places on the field with one of your opponents

Tornado: Sweeps ball up into the vortex

Rocket League is just generally great and fun game. Despite having very little skill in the game, I enjoy playing immensely. It’s not only a fun game to play but to watch. The maps are colorful and fun, the amount of people online that are annoying are about 1 in a million, the original game is fun, and the DLC is a great add on.