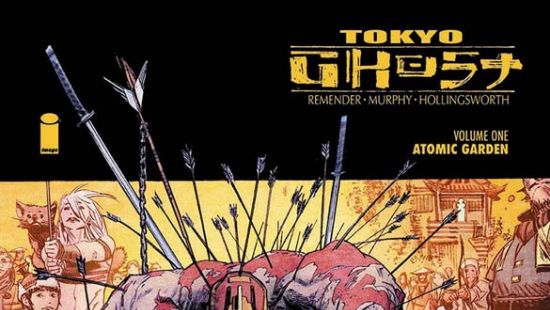 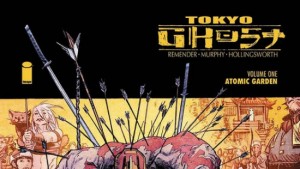 Tokyo Ghost, Volume 1:  Atomic Garden is not your average comic book. In fact, Tokyo Ghost is not your average…anything. Writer Rick Remender manages to tell a story that is much more than a gory exercise in technological superviolence set in a dystopian future; instead, the book makes a clear and concise statement about addiction, the media, and most of all, the power of the human heart. Collected here are the first five issues of the beginning of what is sure to be a new classic, leading us through a world that is shown through Sean Murphy’s visually stunning Borderlands-esque art and filled in with Matt Hollingsworth’s brilliant use of color.

In a 2089 Los Angeles, the overconsumption of technology runs rampant on the streets, completely consuming the lives of every single person in the city…except for Constable Debbie Decay, that is. With her is a hulking, motorcycle-driving, tech-addicted brute of a boyfriend Led Dent, who together literally wipe the scum of the city off the face of the earth with deadly, explosive force. The people of earth exist for one thing: getting as much of a buzz as possible, whether it’s from television shows broadcasted directly into their eyes or body modifications capable of taking your average Joe and turning him literally into a Superman. The pair have one job left in the city, which is to crush one last contract into tiny pieces of cyber-flesh before they can escape to the last tech-free sanctuary on the planet…Tokyo.

From the beginning of the collection, the intense violence radiates throughout the pages like a radioactive bomb of blood and guts, spewing bullets, buzzsaws, and human body parts throughout the panels with finesse; although it’s intense, it’s wonderfully easy to read. Any lesser artist would have killed the impact of the story, which, over time, becomes incredibly deep and emotional. At first glance Tokyo Ghost may seem like nothing more than a violent spectacle, but as the story progresses one finds that it goes much, much deeper than that.

The world in which the book takes place in is a clear metaphor for our addiction to the media and excess in recent times. Here, there is nothing that you cannot get from a buzz through virtual reality. One of the funnier yet poignant examples of this is when antagonist Debbie Decay (which, seriously, has the coolest name) gets her way into the back of a private club in the first issue by offering the bouncer which drug it’ll take to get him in, to which he replies, “self-confidence.” With that, she hands him a vial and is let in. Though it’s funny, it’s much more than a situation where it’s humorous to make fun of the big guy with self-esteem issues. It’s a statement on society as a whole, one that claims that we may all be addicts in this world of increased technological consumption.

While the story’s very heavy, Rus Wooten’s lettering cuts through like a finely-sharpened knife without getting in the way of the meticulously detailed depictions of LA, and later in the gorgeous natural beauty of Tokyo. As the story’s setting changes, so do the colors of the landscape, with Hollingsworth’s tasteful color choices amplifying whichever mood is set by the pace of the story. Though the story is incredibly rich, it is a comic book after all, and the visuals are just ridiculous in the absolute best of ways. After his fantastic art in Punk Rock Jesus, it’s amazing to see that Murphy could actually improve on what I consider to be a very unique and engaging style. The action in Tokyo Ghost is intense, but it’s always clear and interesting. Whether it’s a flying arrow to the back or a brutal crush of the skull, the reader is always able to tell what it going on.

Without spoiling anything, the first issue may throw some off for being too violent without being able to make a connection with the characters, but rest assured; the character growth throughout the five issues presented here is substantial. The relationship between Dent and Decay is much more than just the hot girl with the jacked up powerhouse of a boyfriend. Their shared (though at first stifled) devotion to each other and the way in which they quickly yet organically develop as people is truly powerful.

It’s an insane feat to balance the signature violence of many Image comics with such depth, but it’s a balance that is easily made. While it starts off with violence that’s off the rails seemingly just for the hell of it, including a character who proclaims to be “The Jesus of violence”, the violence becomes a necessity in the story, propelled by human emotion on both sides…good and bad. The villains have very human motives, reasons of grief, loss, and desperation, much like the antagonists. Tokyo Ghost ebbs and flows naturally between narrative and action sequences until the two culminate in one of the most intense endings of a comic book in recent memory; one that leaves the reader begging for more.

The Geeked Gods deem this book more than worthy of your purchase; it is emotionally gripping, intense, and incredibly violent, with enough artistic power to shoot your head clean off. It’s an original and thought-provoking story, one that will surely stay with you long after finishing this first volume.

You can preorder it digitally by following the link here, or you can buy in a paperback version from Amazon or your local comic book store on March 9th. 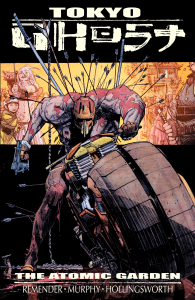 5 Reasons You Hate Board Games (and why you’re wrong)