Review: Superbitch, volume 1 Creator: Kennedy Cooke-Garza Check out the Website for the comic here Levity is something that seems to be lacking in a lot of superhero media,... 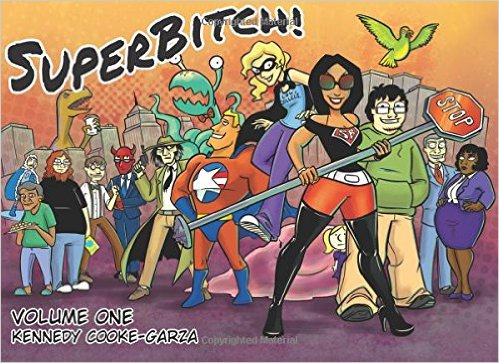 Levity is something that seems to be lacking in a lot of superhero media, but that’s not a problem for spoofy webcomic Superbitch by Kennedy Cooke-Garza.

Rheagan Rodriguez, aka Superbitch, is a bad-tempered heroine for hire whose powers include super strength, flight, and laser eyes. She also has an invisible jet, because why not. Together with her sidekick and BFF, Art Hobo, and they’re roommate, not-quite-super-scientist Quinn, Superbitch fights criminals, villains, and rampaging monsters… for a modest fee.

If you think this sounds like a spoof of, well, Heroes for Hire, you’re half right. Superbitch is a spoof of all superhero comics, taking shots at everyone from Captain America to Green Arrow to the bitch’s nearest analogue, Jessica Jones. Originally started during Cooke-Garza’s time in art school, the characters are more occupied with fighting the challenges of adulthood, like filing taxes and getting back their security deposit, than with battling rampaging dinosaurs and giant crab squids. Lucky for Superbitch, the crab squid turns out to be an accountant.

Aside from its insane premise, one of the joys in reading Superbitch is having the rare opportunity to watch a young creator’s work evolve from a promising concept into something truly excellent. Despite an uneven start, the first volume of Superbitch hits its stride quickly and goes straight uphill from there. It’s easy to identify the point at which Cooke-Garza starts to figure out what the comic is supposed to be, as the style immediately becomes more crisp and confident, the character designs emerge in their phenomenal final form, and the strips get really funny.

The humor of Superbitch isn’t for everyone, but the quick, deadpan dialogue will immediately resonate with readers who enjoy a side of snark with their absurdity. Likewise, the heroic hijinks will appeal to anyone who both loves and despairs of superhero comics. Ridiculous and irreverent, Superbitch balances its relentless lampooning with lighthearted meanness and a delightful lack of subtlety or subtext. 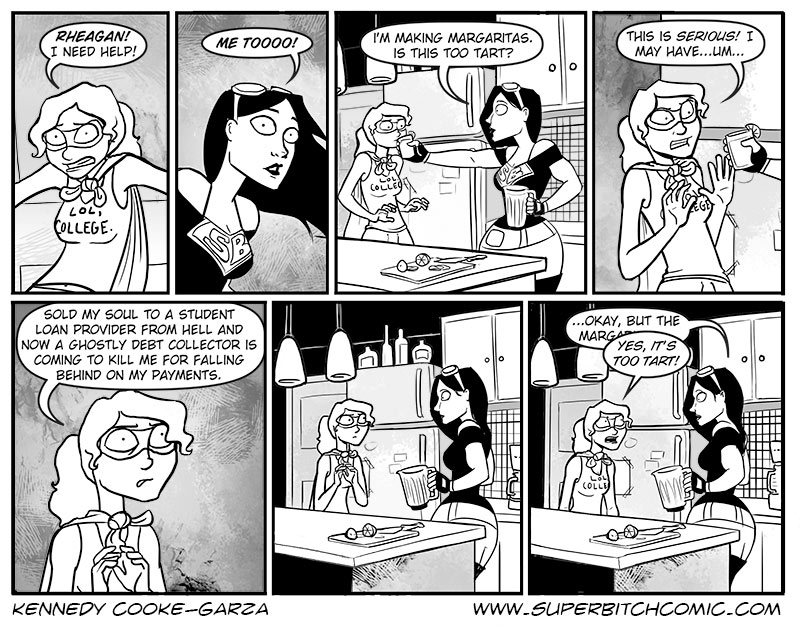 The webcomic is currently on hiatus, but volume one can be purchased on Amazon through SuperbitchComic.com. Kennedy Cooke-Garza, currently working as a freelance artist, can be found on Facebook and on Patreon , where you can see more of her art. Though Superbitch is sadly stalled, here’s hoping we can look forward to seeing more comics – web and otherwise – from Cooke-Garza in the future.