All Star Batman- My Own Worst Enemy/ The Cursed Wheel The first arc of Scott Snyder’s thrilling turn at the helm of All Star Batman came to its conclusion...
by James O'Donnell January 11, 2017

All Star Batman- My Own Worst Enemy/ The Cursed Wheel 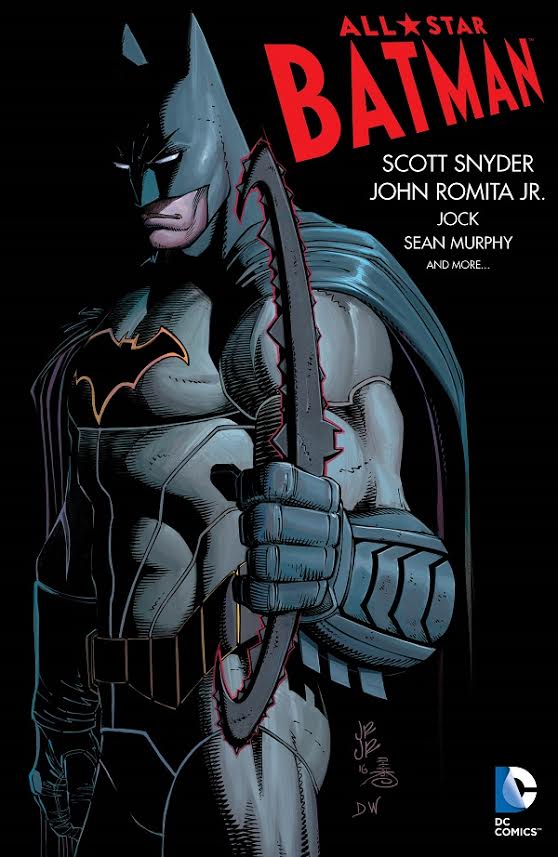 The first arc of Scott Snyder’s thrilling turn at the helm of All Star Batman came to its conclusion last month and while it may have lacked some of the fanfare that his critically acclaimed Batman (New 52) received, this new monthly is every bit as good, if not better than any Batman story he’s written so far. 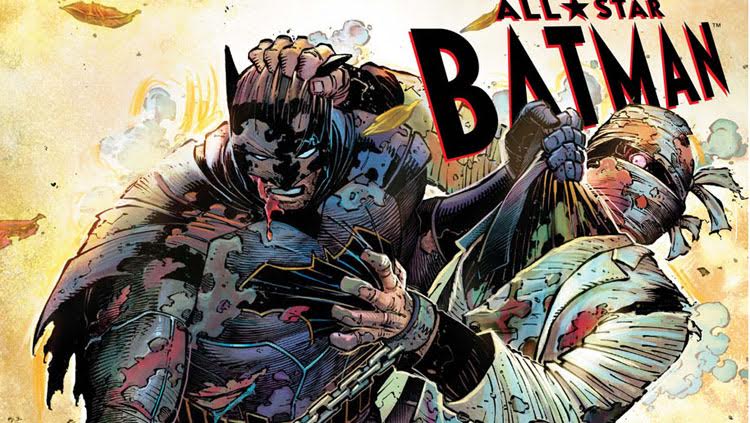 The basic premise is fairly straightforward (aren’t they always?). Batman has decided to cure his friend Harvey Dent from the shackles imposed on him by his other, evil, half: Two-Face. After a particularly nasty attack on Gotham involving acid rain and the skin of the innocent, Batman decides it’s time to pursue a dangerous mission that could very well kill them both. Dent has created a cure and stashed it in the only place he knows it’ll be safe from his villainous half: a home for troubled children located 500 miles north of the city. After realizing that he might soon be shown the door, Face decides to offer the people of Gotham city an ultimatum: anyone who is able to stop Batman from completing his mission will be gifted all the wealth of the biggest crime lords this side of Bludhaven. 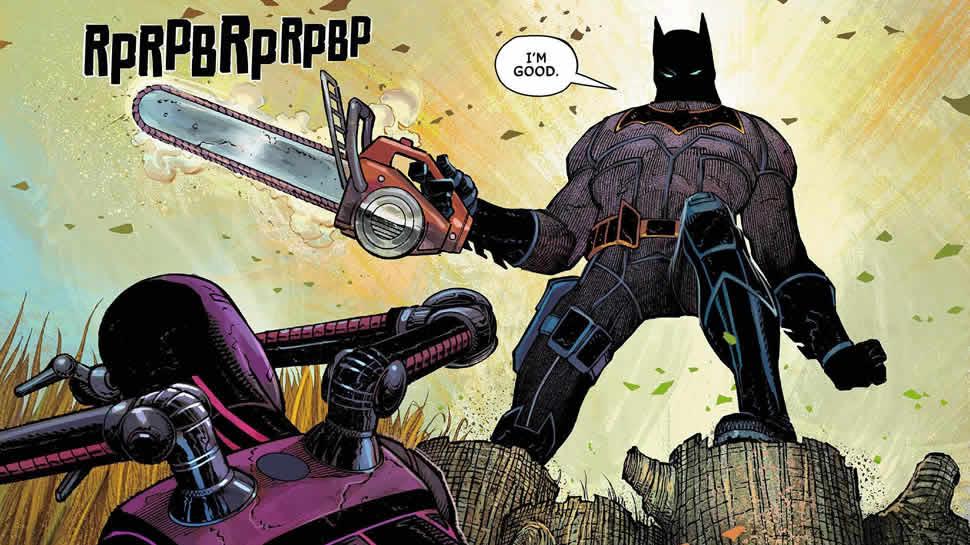 This sets Batman on a race against time, some of the most dangerous assassins in the DC Universe and a mob of civilians who have heard Two-Face’s offer and want to get in on the action. Additionally, Two-Face’s plot has put pressure on the GCPD to invade stately Wayne Manor, with the intention to finally putting the Bat behind bars. But thanks to Batman’s unwavering tenacity, fierce strength and a little help from his new protégée Duke, Batman is able to persevere (and beat the ever-loving crap out of KGBeast). 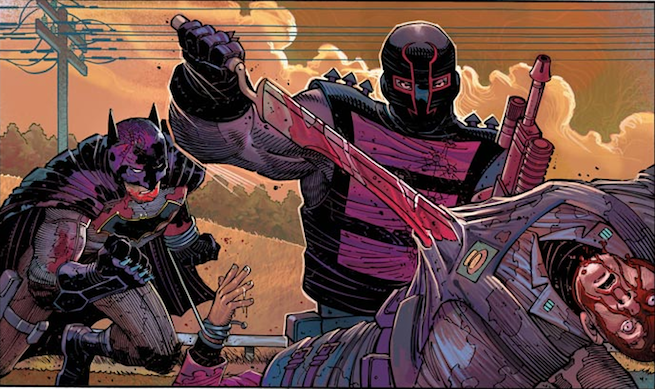 In support of this Arc was the wonderfully crafted tale, The Cursed Wheel (Snyder/Shalvey). In it we see Duke face Batman’s ultimate training tool (the aforementioned wheel) that will either make him the hero, or villain, he is destined to become. The case is a fairly straightforward detective piece involving everybody’s favorite, “Oh yeah, he was in Batman Begins,” villain: Victor Zsasz. Duke must hunt down the hash mark obsessed slasher, while he confronts his own demons in the form of his Mother, who was poisoned by the Joker at the climax of the Endgame story arc. In an amazing moment of clarity, Duke really puts Bruce in his place as to understanding the Joker’s motivation.

I think one of Snyder’s great strengths as a storyteller is his ability to deconstruct his subject and then rebuild as the overall arc develops. He’s taken a character that many of us have built into an infallible demi-god who could easily defeat even the most super-powered of enemies and reminded us that his greatest character trait is his humanity (and thus his mortality). Whether it’s his near-death at the hands of the Court of Owls, or his actual (kind of) death at the finale of Endgame, Snyder has demonstrated that Batman’s most important “superpower” is his stout perseverance. All Star is no exception as we see our hero shot (in the back and the head), Stabbed (Through both wrists and shoulder), run through with a poisoned dart, temporarily blinded by a chemical burn (which didn’t stop him from flying a goddamn airplane) and generally bruised, battered and beaten. Yet through it all Batman drags himself to the finish line with his prisoner in tow, no matter the personal cost.

Another great trait that Snyder brings to the table is his tendency to work lesser-known villains into his stories in a way that is both accessible for newcomers and satisfying for die-hard fans. Throughout the five-part story, readers are treated to a diverse grouping of JV-Squad rogues like Killer Moth, Firefly, Black Spider, King Shark, Amygdala, Copperhead, and Cheshire, with each presenting themselves as a new thorn in the Dark Knight’s side.

The artwork in this book was as consistently great as the story, with John Romita, Jr. teaming with Danny Miki and Dean White to create an almost otherworldly tone while still grounded in reality. One of the most striking images in the 5-issue spread is in part 1, after Batman lops off Black Spider’s robot arms and glares Firefly into submission. This was the exact moment I knew this book was going to be a great Batman story.

I thoroughly enjoyed the first Arc of All-Star. Granted, I am the type of fan who believes that Snyder can do no wrong when it comes to Batman. In arc 2 he could decide to turn Bats into a heroin-addicted Jazz critic who doesn’t fight crime and I’d still slap my money on the counter of my Local Comic Shop each month, clamoring for what comes next.

Fortunately for people who’d rather see Batman punch evil doers into submission and brood on rooftops, he’ll be taking on Mr. Freeze when All-Star #6 hits shelves January 11th. For those interested in checking out My Own Worst Enemy (I tried to keep this as spoiler free as possible) the trade paperback is set for release on April 19th. 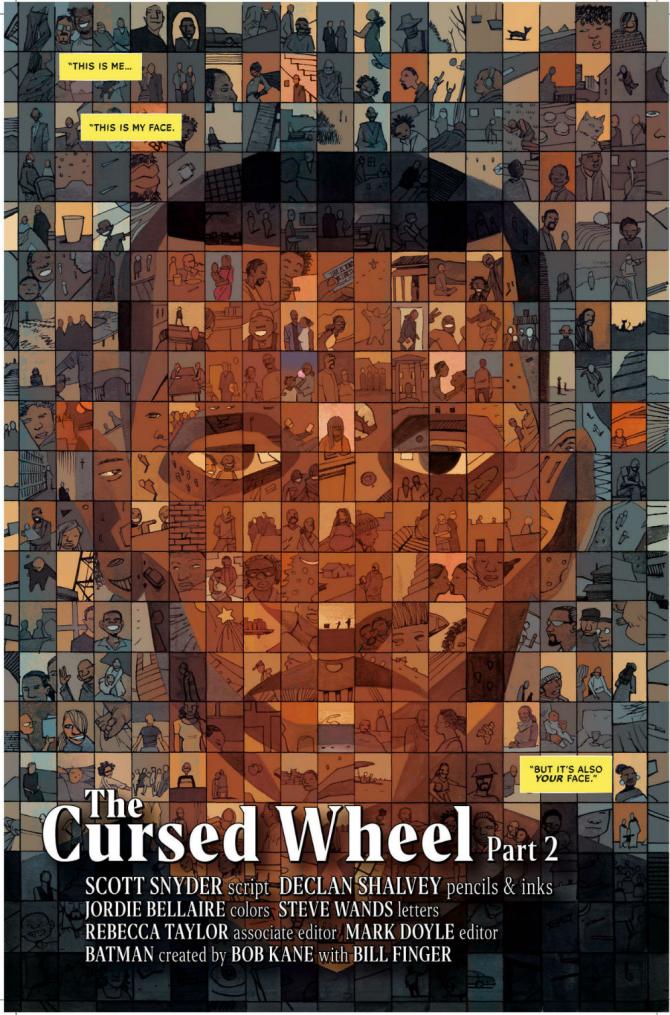