The second volume of Saga is good, but it ultimately does not feel as special as the first. 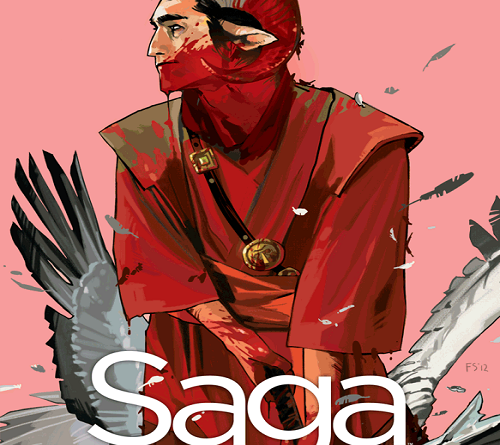 Volume 2 of Saga picks up just where the first volume left off, closing the gaps on the cliffhangers left when we first met Marko and Alana. It does an acceptable job at filling in the blanks and giving the readers some insight to their backstories, but at times feels a bit vague and rushed in doing so. This is not to say that the book isn’t good – it’s very good, actually – but it does not have the same “wow” factor that the first did. If anything, much of this volume feels like a bridge until the next volume.

What I mean by this is that by the time we finally meet Marko’s parents, we are left wondering how they are going to take to the cross-breeding of their son and someone other than a Moonie. As you can guess, they’re aggravated, and so is Alana, as she doesn’t take kindly to the racism that her and Marko are attempting to defy by their marriage and child. Alana and Marko’s father, Barr, have tension, but it is so easily broken that it almost feels phoned in. There was the potential for some very interesting dynamics between the two, but it seemed glossed over and hurried. I am not sure why Vaughan decided to take this route, especially when factoring the dramatic elements that could have been played out, but it just seems a bit flat. On the same note, we get to see the early days of Alana and Marko’s relationship. Just like Barr and Alana, the relationship starts off confrontational but then almost immediately skips to the two of them as lovers (Barr and Alana are not lovers; you get what I mean. Don’t be a weirdo). I would have loved to watch the two of them argue and sort out their differences. It softens the impact of the two races coming together. I could see that the series will delve into their early dynamics in later issues, but right now, it ends up being very disappointing.

But enough of all that negative talk – this volume actually is very good, major gripes aside. There’s still a lot of token Saga craziness; a highlight of this insanity being the biggest, most disgusting ballsack I have ever seen illustrated in a comic. Oh, God, is it disgusting. It is big, hairy, cheesy – why am I even describing this to you? Is that what my life is now…taking time out of my day to describe cartoon testicles? Yes, it would seem that it is. These are the hands that I’ve been dealt, I suppose.

It’s not as action-packed as the first volume of Saga, but it hits the mark when it needs to. There are a few exciting scenes filled with blood and guts, but for the most part, this really just seems like an effort to fill in some details before moving on to the next phase of the story. Fiona Staples’ art is just as phenomenal as ever, and it makes it hard to find things to scrutinize about it. Honestly, I can’t. It may be some of my favorite artwork in any comic book ever. The colors, the character design, the level of detail, the crazy, humongous balls…here I go again. Maybe I’m too immature for this. Or maybe that’s exactly what Vaughan wants?

Regardless, Saga Vol. 2 is good. It’s not as good as the first installment, but I would be incredibly surprised if it was able to. I’m hoping that the next will bring us back to full speed and really blow my mind the way the first did. For now, this is a good transitional piece.

The Geeked Gods Score: 7.5/10. Good. Some improvements must be made if the series is going to continue to be as great as it started out, but I have faith in this absolute powerhouse duo of Vaughan and Staples.