Teddy Roosevelt has always been an object of extreme fascination since his presidency, and rightfully so. The man’s a classic, All-American badass; the embodiment of the strong American spirit. Which is probably why he makes such a good comic book character in Rough Riders. 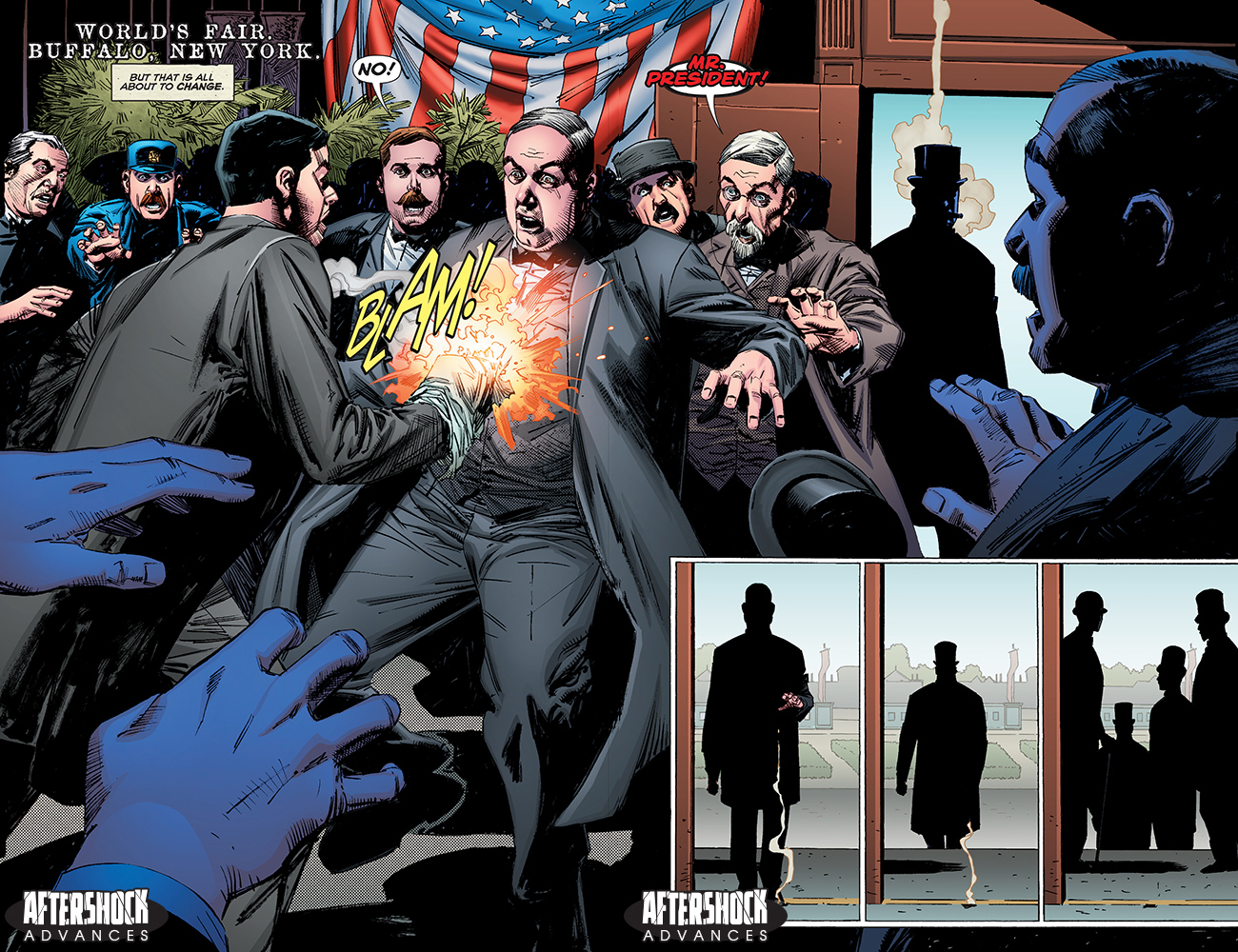 Here, he is a tormented, deep human being – much like in real life. But he differs from real life in the fact that he’s forced to deal with robotics and madmen and bloodthirsty killers…oh. Well, maybe it’s not that different from real life, actually. This is America we’re talking about here, not Canada. Regardless, you know what I mean. This is a fantasy story, and to my knowledge, Roosevelt did not team up with Thomas Edison and Harry Houdini and participate in reviving the dead and forming a veritable supergroup of American history.

Rough Riders Vol. 2: Riders on the Storm collects the second arc of the Rough Riders story, starting three years after the events of the first one. Truthfully, it starts off a bit slow during the first issue, but that’s most definitely the calm before the titular storm. Once the second issue hits, it’s like a tidal wave that you can’t escape from in the best of ways. Simply put, it’s absolutely crazy. I was a little put off by the pace of the first issue in the collection, but the contrast between the introduction and the rest of the story prompted me to re-read it after finishing the entire arc, and now the quiet is necessary. I don’t think the rest of the volume would have had the same type of impact had it been nonstop craziness from the start. 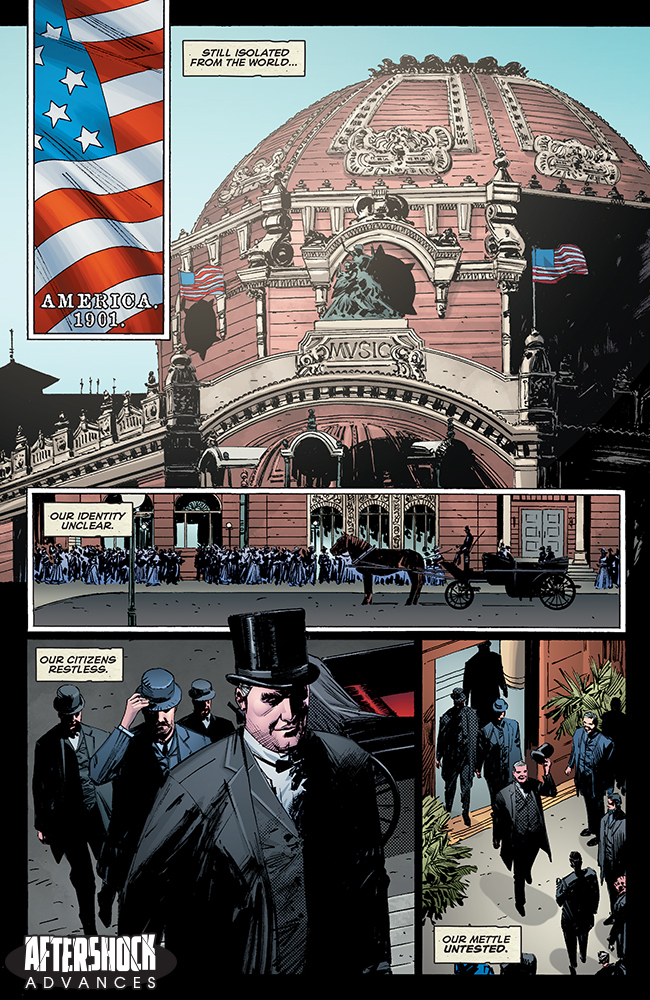 Adam Glass, producer on Supernatural, has knocked it out of the park with this one. The characters are expertly crafted and there’s a sense of realism running throughout the fantastic situations that we’ve found our characters in. Yes, there are characters besides Roosevelt in the story, but the depiction of him is just so excellent that it stands above everything else in the book. He’s a much deeper character than one would expect. He seems angry; torn apart by the events of the world. But this causes his character to become even more badass than ever before, and yeah, it’s pretty damn awesome. 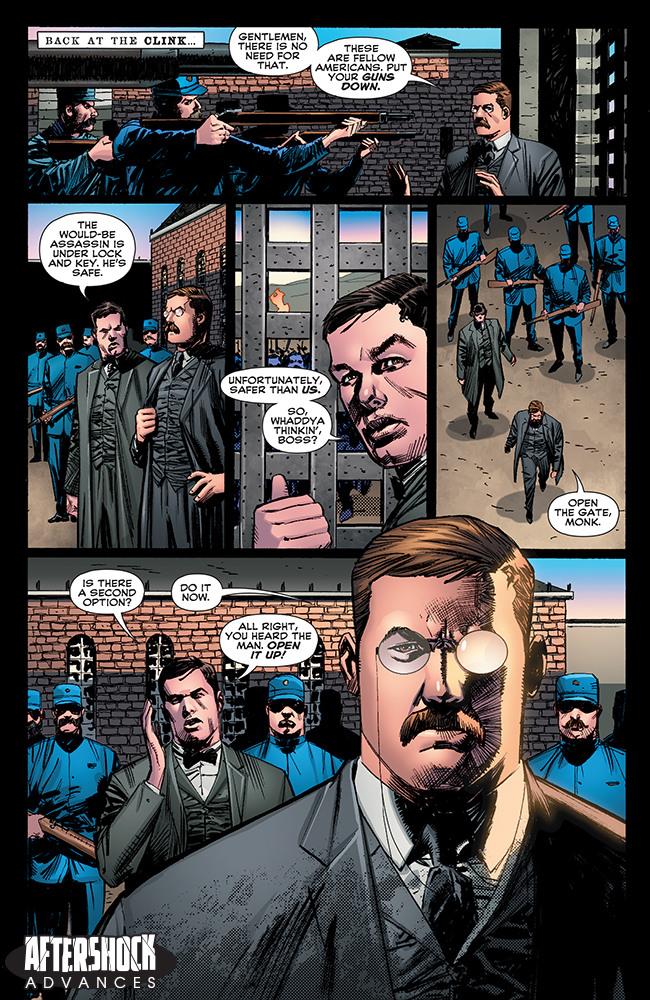 Patrick Olliffe’s art is superb as well, and I get a heavy early 1990’s Marvel vibe from his character design and action sequences. They’re rooted in realism, and I appreciate the fact that the characters never appear to be overwhelmingly exaggerated or ridiculously bulky (even though boxer Jack Johnson is a hulk of a man here, it’s not ridiculous or silly looking).

There’s a conspiracy behind the President’s murder running throughout the arc, but to say anything more would be to spoil things – and I would never do that. It’s worth finding out for your own. There’s still time to catch up on the first volume before this release; you’ll need to get acquainted with our heroes from the first volume. Then get ready for the madness that is Riders on the Storm. You won’t regret it.

The book is on sale November 1st. Call your local comic book store and demand it!