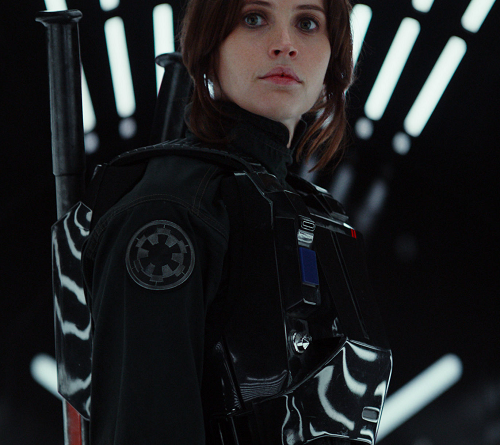 There’s a growing epidemic within fans of the Star Wars universe which forces their minds to accept anything that’s released in the franchise, for two reasons. One being, “it’s not The Phantom Menace“, and two being, “it’s Star Wars!” As a fanatic, I somehow have become immune to this disease. I believe that the original trilogy is one of the greatest things ever to happen to mankind – period – and so I have remained incredibly critical of everything that’s come out since I was of an intelligent enough age.

Enter: Rogue One, the first Star Wars full-length spin-off, directed by Gareth Edwards (2014’s Godzilla). Set in between Episodes III and IV, Rogue One attempts to bridge the gap between the two films and explain exactly how the Rebels acquired the plans to the Death Star. With a darker, more adult tone than we’ve ever seen in a Star Wars film thus far, Jyn Erso (Felicity Jones) leads an assortment of pilots, assassins, and former imperials on a mission to push the Rebellion forward and figure out a way to destroy Darth Vader’s ultimate weapon.

The film, for all intents and purposes, works fine enough and properly shows just how these crucial plans got into the hands of the Rebels in the first place. It is a dazzling science fiction movie with effects galore – some extremely impressive, and some diving deep into the uncanny valley – but the big problem here is the characterization. Yes, we know that this mission may be a suicide, but we aren’t given much of a reason to truly care besides the fact that we are told to. The story of Star Wars contains many loopholes and plot points that you really have to stretch your reasoning to accept as truth, but these things really come second to the strength of the characters within the story. Rogue One misses this point entirely and does not give us anything revolutionary in terms of character development outside of three underutilized faces. These are Donnie Yen as Chirrut Îmwe, a blind warrior with a strong belief in the force, the most compelling of the bunch; Jiang Wen as Baze Malbus, a militant, heavy artillery-wielding companion to Îmwe; and finally, Mads Mikkelson as Galen Urso, a reluctant Imperial science officer who holds the key to destroying the Death Star. These three characters are quite possibly the only ones in the film who will remain memorable after the credits roll, barring any recurring characters. Jyn Urso, on the other hand, remains to be a bland character without anything outlandishly unique about her, and the robot companion of the team, K-2SO, provides comedic relief but feels very much like a more confrontational C-3PO. The rest feel replaceable and plastic, none of their personal tales being given much care.

There are those who will say that it doesn’t matter and that the overall story is much more important than the individual characters; I will strongly disagree, and I will use the Original Trilogy as my argument. Each character, their motivations, their strengths, their flaws, are given as much care and attention as the rest of the war going on is given. In Rogue One, it’s an afterthought.

But don’t jump to conclusions just yet. Though I am being critical – I told you I was going to do that, didn’t I? – Rogue One is a good movie. It’s one of those spectacles where you can just sit back and watch the action go on without really getting too emotionally attached; partly because of characterization, but also partly because you know the eventual outcome. It’s a fun supplemental film, one that I enjoyed, but it simply didn’t have the power to affect me the way any of the other films did. And yes, in being completely honest, I would have to include the prequels in that statement. I was nine when the first of them came out and it blew my mind back then. I was a child, what do you want from me? And no, I’m not a psychopath; Jar-Jar is a horrible character. So let’s just get that out of the way before any of you start slinging absurdities.

Areas in which the film is sure to satisfy any fan of the franchise are undoubtedly the scenes with Darth Vader in them, as infrequent as they may be. Many have been clamoring their whole lives – literally their whole lives because they originally saw Vader for the first time when they were children – to see the villain pull out all the stops and show his true power. And in Rogue One, your prayers have finally been answered. The two scenes with him as the focal point are nothing short of mindblowing; they give the feel that I’ve lamented missing from much of the rest of the film. That adrenaline, that excitement, that sense of wide-eyed fear – it’s all there, in glorious HD. Vader still rules after all of these years.

To reiterate: Rogue One is a good movie, despite its shortcomings. It successfully shows the horrors of the Death Star and illustrates an interesting struggle to get the plans for the weapon, but it lacks the sense of wonder that the other films have given us. As the first supplemental film, I hope that the upcoming ones will be better. To me, Rogue One was a trial run; and from this run, I’ve decided that although it’s good, I sincerely hope that future installments tweak certain things. And not becoming fully enamored with every single thing that bears the Star Wars name does not make you any less of a fan.

Go see it for yourself.

Rogue One is a Star Wars movie that doesn’t feel like a Star Wars movie; interesting story, great visuals, but it lacks some serious emotional depth that are so prevalent in the other films.